Emily Yin and the Equality of Rugby 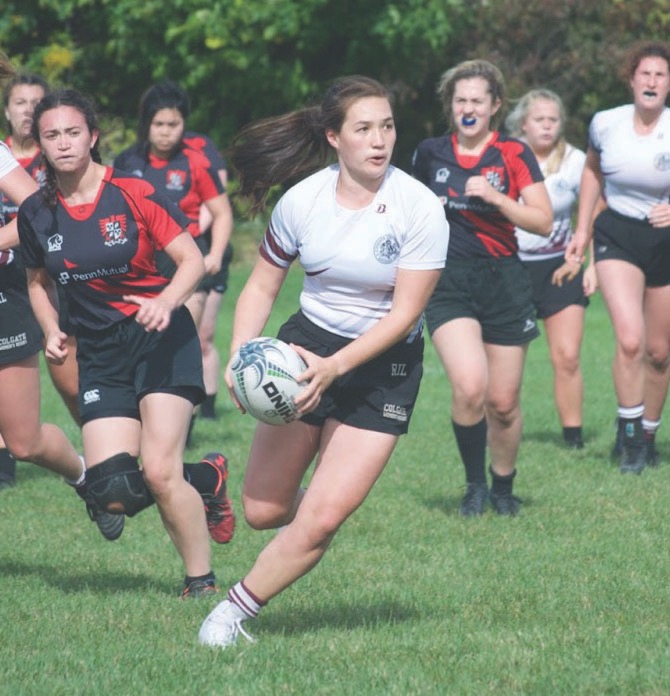 When senior Emily Yin transferred to Colgate from the University of Colorado, Boulder her sophomore year, she immediately joined the rugby team.

“I got to college and knew I needed a sport to maintain structure in my life. I found rugby quickly and it provided me with that,” Yin said.

Rugby offers her much more than structure, however, and Yin is thankful for the impact it has had on her college experience.

“Transferring to Colgate, rugby gave me a social outlet and group of people that accepted me as soon as I got here. Rugby has constantly been the support system that I fall back on, and the group of people that I have the most fun with,” Yin said. “It is the thing that pushes me to be better.”

As a captain, Yin serves as a liaison between her coach and the team.

“I like to think of it more like I am the team’s support system, who they look up to and ask questions to. We keep them organized and make sure that we uphold certain standards as a team,” Yin said.

The team dynamic is Yin’s favorite part of playing rugby.

“I love rugby so much and it’s the most fun that I have at college, on the field and off the field, because as a team we’re so close.”

Despite occupying different spaces on campus, Yin comments on the way the sport brings all of the players together.

“Somehow it all works and we cohesively get along. You come onto the field and everyone is the same and it doesn’t matter what else you do on campus. We have everyone from EMT’s to sorority members,” she said.

Unfortunately, due to COVID-19 restrictions, certain aspects of team-bonding have been lost this year.

“The biggest loss is that we were on track to win nationals last year, and that obviously got thwarted. This year, the fact that we haven’t been able to play games and the team bonding that goes along with traveling to a game and tournament has been taken away.”

In addition to providing her with a close-knit group of friends, Yin appreciates how the sport empowers her.

“Rugby is an empowering space for women. It’s nice to be on a team that wholeheartedly supports one another and empowers each other. The rules are the same for men and women. It’s a very equal space to be in and whatever’s asked of us is also asked of the men,” Yin said.

The men’s and women’s teams even share a coach, David Chapman, with whom Yin has a great relationship.

“Wednesday mornings I go and hang out with his kids. He lives in town, so if we’re ever walking by, I always pop in and hang out for a little while. He’s like a big brother to me,” Yin said.

Yin appreciates Coach Chapman’s commitment to the team and the program he has built.

“Our coach puts so much emphasis on the importance of being at Colgate for school and wants us to get jobs. We have networking events with rugby alums. Colgate rugby is not just about the four years you’re here, it carries on throughout the rest of your life,” Yin said.