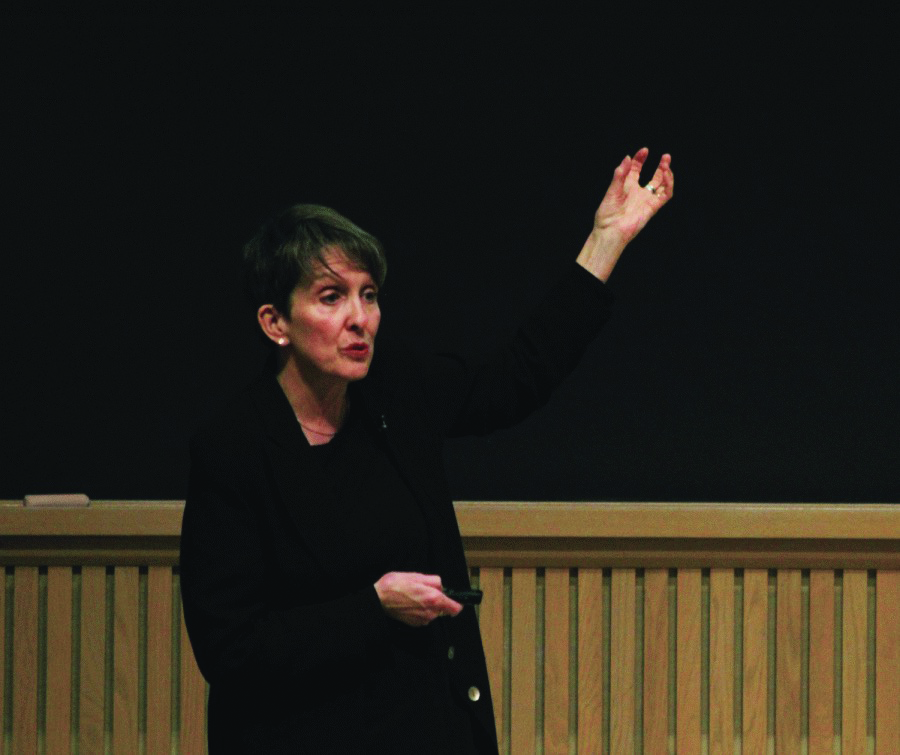 Provost and Dean of the Faculty Tracey Hucks announced Professor of Anthropology and Peace & Conflict Studies Nancy Ries as the 2021 recipient of the University’s Jerome Balmuth Award for Teaching and Student Engagement in an email to the campus community on Monday, April 26. The annual award — endowed by Mark Siegel ‘73 and named for Harry Emerson Fisdick Professor of Philosophy and Religion Emeritus Jerome Balmuth — recognizes a Colgate faculty member who exemplifies “distinctly successful and transformative teaching,” according to the Colgate website. The award is accompanied by a cash prize and an event honoring the awardee. The awardee also serves as a speaker during commencement’s baccalaureate service. Due to the COVID-19 pandemic, the celebration in honor of Ries will be held at a later date, according to the announcement.

“Professor Ries has taught students across the generations who have gone on to work as professors in anthropology; political scientists; staff members in the U.S. Department of Defense; and non-profit founders,” Hucks wrote of Ries, who teaches courses in sociology and anthropology, peace and conflict studies, Russian and Eurasian studies and the Core curriculum. “One student who nominated her stated, ‘Professor Ries truly taught me how to believe in myself academically, provided students with a deep, heartfelt, and transformational understanding of the course materials and she fostered a learning environment where students felt important, safe and challenged.’”

The Balmuth Award Selection Committee, which includes Hucks, University President Brian Casey, the Student Government Association President, an associate dean, a representative from the Board of Trustees and the Faculty Development Council, makes a decision on the award’s recipient each year based on nominations from faculty, students and alumni.

Among the students who nominated Ries for the award was junior Crinny Woloson, who said her experience in PCON 218, ‘Practices of Peace and Conflict: War in Lived Experience’ with Ries last semester was transformative.

“Professor Ries is one of those professors I’ll remember forever. She makes active efforts to get to know students and is so accommodating. She is so passionate about the concepts she teaches and engages critically with students. It sounds cheesy, but Practices of Peace and Conflict changed how I think about the world,” Woloson said.

In addition to teaching, Ries has served in multiple faculty leadership positions since coming to Colgate in the fall of 1991, including chair of the Department of Sociology and Anthropology, Director of the Peace and Conflict Studies Program and Chair of the Off-Campus Study Committee and Division Director for University Studies, during which time she helped launch the most recent iteration of the Core Curriculum revision, according to Hucks’ email.

As a professor and anthropologist, Ries has taught classes and conducted research on Russia and about war and genocide in the 20th and 21st centuries. Ries’ scholarship also concentrated on how societies cope with violence, genocide and war and the lasting impacts of massive societal trauma.

“Threaded throughout my courses is the study of racism and misogyny and how these are weaponized to create divided societies and foment violence and genocide. While these are not easy topics for the classroom, they make us all aware of the social violence that structures our lives and our societies, and I find that students are deeply invested in learning about these things,” Ries said.

“Her teaching is particularly special because though her class was filled with heavy topics and sensitive topics, she respected everyone’s space and also respected everyone’s thoughts and comments especially regarding touchy subjects, so she easily facilitated very hard discussions,” Rapoza said.

“All of our classroom discussions were so meaningful, and I really got to know both her and my classmates,” Morgan said. “I felt truly valued as a student, and she was so willing to work with me on assignments and extensions if I ever need any extra assistance.”

In her time as a faculty member, Ries has worked closely with Professor of Geology and Peace and Conflict Studies Karen Harpp, one of the award’s ten prior recipients, who said Reis brings meticulous planning and heart to every class, including their co-taught course, PCON 322, ‘Weapons and War,’ which they’ve taught nearly ten times together since 2003.

“The opportunity I have had to work and learn with Ries over the years has been a remarkable intellectual adventure, literally transforming how I think and teach in profoundly important ways. I know I speak for her students, as well as many colleagues and junior faculty she has advised when I say that working with [Ries] has led many of us to fundamental paradigm shifts in how we think, understand, and experience the world; if that is not what constitutes a master teacher, I don’t know what does,” Harpp said. “I know of no other faculty member, at Colgate or otherwise, who commits more fully and wholeheartedly to their teaching endeavors.”

Ries, who learned she received this year’s award at last Monday, April 19’s faculty meeting, said she was speechless.

“I was completely stunned when I heard Dean Hucks pronounce my name, and I’ll never forget that dizzying moment. I am surrounded by phenomenal, inspiring teachers at Colgate and I imagined many of my colleagues who might receive this award, really never thinking I would be under consideration for it,” Ries said. “I really had no inkling or any expectation of receiving this or any other award. I was—and still am—quite surprised. I’m delighted by it but I also feel quite humbled to receive this honor.”