Contingent Faculty Move Toward a Union 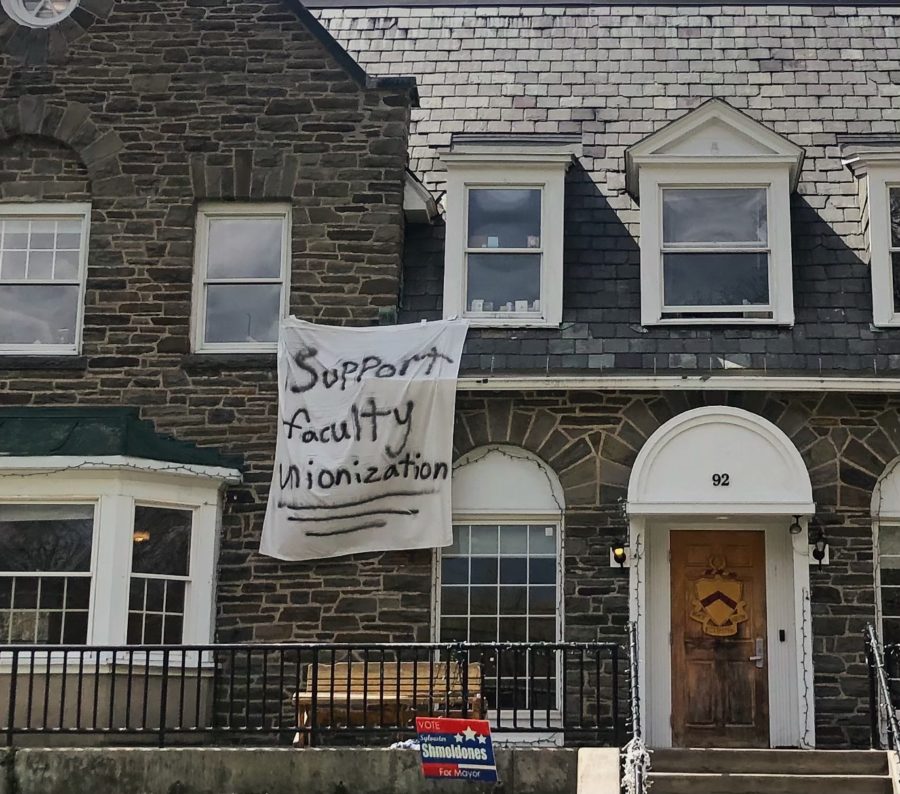 After over a year of organizing, all non-tenure-track contingent faculty are nearly ready to file a request for a union election with the National Labor Relations Board (NLRB); the Contingent Faculty Union Organizing Committee (Organizing Committee) has collected the majority of union authorization cards required to request an election, but is still working to bolster more community support.

The Organizing Committee began its efforts in Fall 2019 with a series of social events for contingent faculty to meet, identify their potential bargaining unit and discuss their diverse needs and how they would be addressed by the union.

“The motivations were then what they are still now. We are simply reaching out across campus to all contingent faculty with the interest of simply being able to join together,” Organizer and Cello Teacher Ruth Berry said.

The contingent faculty then successfully got the majority of the aspiring bargaining unit to sign union-authorization cards to indicate a desire to form a union. This particular bargaining unit would represent all adjunct faculty, junior and senior lecturers, instructors and visiting assistant professors, which organizers estimate is 100-150 people. Visiting Assistant Professor of Educational Studies and Union Organizer Laura Jaffee has been encouraged by the positive reaction to the organized social events.

“Of the conversations that we’ve had… there’s been overwhelming support, so that’s really encouraging to see and to hear that there is widespread support for a union. I think the general sense among contingent faculty is that this is something that’s really important to have a voice on campus and to have that legal right to sit down and negotiate with the administration over our working conditions,” Jaffee said.

Once a majority has signed their cards, the bargaining unit can move forward and petition the NLRB to conduct an election, which the contingent faculty has not yet done in the interest of bolstering more support and allowing for broad discussion. Once this petition has been made, the employer – Colgate University – will conduct an investigation of the bargaining union’s eligibility, and, should the bargaining unit prove to be eligible, the individuals in the bargaining unit will vote in an NLRB election to determine whether the union will be legally recognized.

The main priority for unionizing, Berry and Jaffee explained, is creating a transparent and legally protected space for all contingent faculty to discuss and negotiate their needs with each other and the University, covering topics like salaries, contracts, working conditions, benefits and job security. This is especially important given the precarious nature of most non-tenure-track faculty jobs.

“Without a union, there is no way for workers to have a legally protected right to negotiate things like our wages, our benefits, our job security and all these sorts of things that affect our lives. And it’s also a huge equity issue when we’re sort of siloed from each other, and we don’t have a structure in place where we communicate with one another, where we learn about, what are some issues that [we’re] facing and how might we address that in our contracts,” Jaffee said.

Berry sees non-tenure-track faculty isolation from one another as a big issue at Colgate. Both her parents were tenured professors at Colgate, so this isolation is particularly disappointing given that Berry knows what Colgate does for other faculty members.

“Compared to other higher education institutions where I have worked, I have noted that it seems that the tenure track faculty here have a much more regular sense of community, of communication across departments, and here I’ve felt very isolated. It’s like being in this little siloe,” Berry said. “Basically, unions are workers who come together, and we determine our own goals and we choose the rules by which we operate for the common good.”

There are already three existing bargaining units on Colgate’s campus, representing over 250 facilities, maintenance, housekeeping, food service, non-teaching library, mail services and technology workers. All three units are represented by Service Employees International Union (SEIU). Jaffee and Berry both said they are excited that using SEIU will encourage solidarity between contingent faculty and all these already unionized workers.

Furthermore, the contingent faculty unionizing efforts come during a national wave of similar union efforts in academia as universities rely more and more on non-tenure-track faculty, according to The Chronicle of Higher Education. SEIU also represents faculty on more than 60 college campuses, and Berry is looking forward to SEIU bringing Colgate’s contingent faculty into this broader community as well.

“We’re excited to work alongside the leaders of the other campus bargaining units. Colgate workers who are organized with SEIU have secured labor management committees and grievance procedures for ongoing problem solving, annual cost of living increases, 95% employer paid healthcare benefits for facilities and maintenance employees and more,” Berry said. “…We are greatly encouraged by the gains fellow faculty members have made at nearby colleges/universities as a result of their democratically choosing union representation.”

The Organizing Committee recently went public with their unionizing efforts in an April 2 letter to the editor, a strategic move that Berry and Jaffee said is important for bolstering support, educating the community about unions, including more contingent faculty and securing a fair election process.

The moment a unionizing effort becomes public, though, is also the moment when it can become more contentious. While Jaffee said she has no reason to believe that Colgate will do anything but uphold fair election processes, she also explained that it is generally in a university’s economic interest to work against unions with public campaigns to discredit the need for a union, which makes securing public support crucial at this stage.

Senior Advisor to the President Christopher Wells explained that the Administration has not yet become involved with the unionizing process.

“We’ve got great relationships with the existing unions on campus and [if] we get a formal request for another one we’d be happy to talk to folks about it,” Wells said.

An upcoming faculty vote that could grant contingent faculty certain voting rights has caused some concern amongst organizers about whether they will achieve a fair election process from the NLRB and Colgate Administration. Currently, most contingent faculty don’t have voting rights based on forty-year-old Faculty Handbook stipulations, which has been a particular point of focus this year as the faculty has been voting so frequently on the ongoing CORE revision. In other institutions’ attempts to unionize, such voting rights have been used to exclude contingent faculty from unionizing on the basis of them now having managerial power. As such, the Organizing Committee requested the faculty postpone voting on the matter when discussed in the April 5 and 16 faculty meetings, unless the University explicitly affirms they will not dismiss the union on this basis.

“It’s really just a matter of timing. We are completely in favor of contingent faculty having voting privileges, and voting privileges is something that is absolutely possible after we’ve achieved our union,” Berry said.

The community has shown immense support for the aspiring union. On April 15, 200+ individual students and 29 student organizations signed a letter to the editor that ran in the Maroon-News affirming their support for the union. The letter speaks to an understanding of the implications of contingent faculty working conditions on student life.

“With increased bargaining power and job security comes more academic freedom and an increased propensity to speak out against injustices both on Colgate’s campus and beyond, which helps us learn as students. We get a better education when our professors feel secure in their roles, and so we benefit when our contingent faculty have the right to democratically and collectively bargain the terms of their contracts,” the letter reads.

Professor of Religion Georgia Frank spoke to this dynamic from her perspective as a tenured faculty member, explaining that her ability to teach classes, conduct research and lead Sophomore Residential Seminars (SRS) would not be possible without quality instruction from non-tenure-track professors, who frequently fill in for tenured faculty. Frank signed a letter to the editor along with 15 other tenured faculty that ran in the Maroon-News on April 9, and said that her support for the union comes from an understanding of non-tenure-track faculty’s attention to students, often even after their contract with Colgate has ended, and an interest in better job security and livable wages for non-tenure-track faculty.

“It’s about being a part of a just institution,” Frank said.

University Studies Lecturer Ferdinand Von Muench, Senior Lecturer of Italian Franziska Merklin and Lecturer in Russian and Eurasian Studies Sergei Domashenko have expressed concerns about the Organizing Committee and SEIU’s approach to forming a union, which they say hasn’t allowed for open discussion about the union or potential alternative options. Von Muench believes this is partly due to the fact that contingent faculty don’t already have an existing space to debate such issues.

“What happens sometimes in these processes is that you have a very vocal campaign with big institutional backing — the SEIU is a big organization — and whoever has any questions or doubts basically will be very reticent about voicing those in public because they are worried about crossing their colleagues, or those institutions,” Von Muench said. “…My feeling is that the academic enterprise is all about having conversations and discussions about everything that is of importance. I don’t think it is a no-brainer that the SEIU is the right thing for Colgate… The union route might still be the best thing, but it’s still worth having the conversation.”

Being married to a tenure-track faculty member and working in one of the many academic programs with a less clear distinction between tenured and non-tenure-track faculty (e.g. a contingent faculty member chairing a department) also makes union conversations more complex for von Muench, and displays how Colgate doesn’t have as clear a divide and opposition between management and workers as other workplaces where unions exist. Merklin agreed that this complicated dynamic makes a union particularly deserving of sensitive treatment at Colgate.

Merklin and Domashenko, who is already involved in one of Colgate’s existing bargaining units with SEIU for his non-teaching role in the library, said that the lack of discourse has allowed for a disconnect between organizers and members of existing unions on campus who have had negative experiences with SEIU.

Berry and Jaffee recognized that some departments, like von Muench’s, are better at bringing non-tenure-track voices into conversations, but she is more interested in creating cross-department solidarity and discussion. They both said that COVID-19 has proven a significant barrier to large-scale discussion about the union, but has not negated the beginning of the formation of a strong union.