The Colgate Maroon-News • May 15, 2021 • https://thecolgatemaroonnews.com/30246/news/colgate-university-holds-in-person-commencement-for-class-of-2021/ 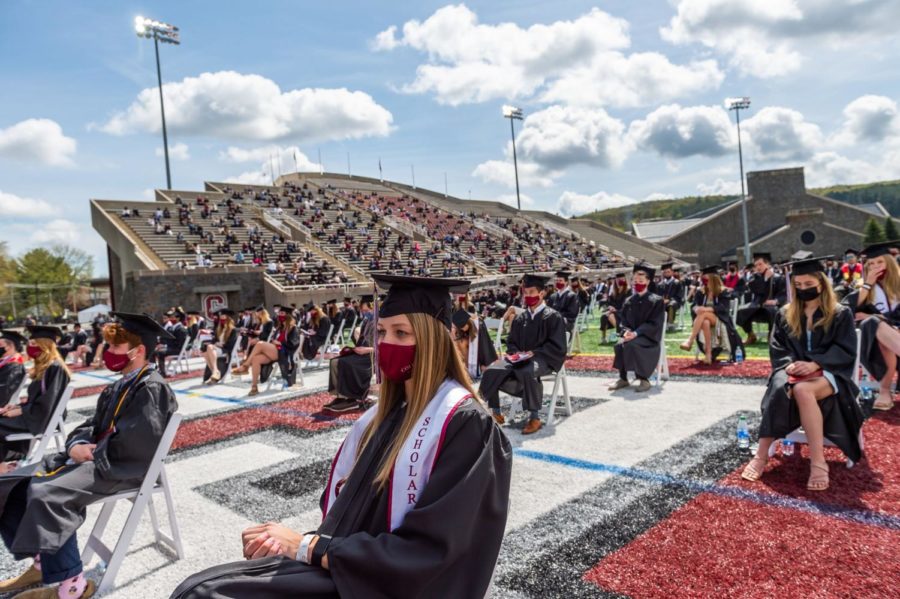 After months of preparation in the midst of changing COVID-19 pandemic policies and restrictions, the Commencement Ceremony for the class of 2021, the University’s 200th Commencement, was held in-person at Andy Kerr Stadium on Sunday, May 9. The Baccalaureate Service, held a day earlier on Saturday, May 8, was live streamed from the Colgate Memorial Chapel and featured various virtual addresses, including those from Campus Rabbi and incoming University Chaplain Barry Baron, Professor of Anthropology and Peace & Conflict Studies Nancy Ries and both recipients of the 1819 award, graduating seniors Jake Gómez and William “Paul” McAvoy. Graduates also participated in a socially distanced torchlight Procession from upper campus down the hill to Taylor Lake on Saturday evening.

Following opening remarks from Baron and readings from student leaders of campus religious organizations, Ries, the 2021 Balmuth Award Recipient, addressed graduating students reflecting on the significance of graduating students’ experiences and knowledge gained over their four years at Colgate, especially in the context of the pandemic.

“Think about how much academic work you did over four years and how that work creates your selfhood, and indelibly imprints who you are and who you can and will become,” Ries said. “It would have been marvelous to celebrate your achievements as we usually do with a big April awards convocation in this chapel. Yet, despite our abbreviated and distanced rituals, you all know what knowledge you now have and how hard-won it is.”

According to Ries, the presence of Gómez and McAvoy at the Baccalaureate Service was meant to “represent the ritual honor that is missing.” Gómez and McAvoy were awarded with the 1819 award, which recognizes “character, scholarship, and service to others, best exemplifying the Colgate spirit,” according to an email sent by University President Brian Casey on Friday, April 30.

Gómez and McAvoy both expanded on Ries’s mention of the effect of COVID-19 on students’ lives, with Gómez also acknowledging the role of staff and faculty in alleviating the difficulties of this year. In his reflection, Gómez also commented on the intersections between his academic and extracurricular involvements, and how they informed his experiences at Colgate.

“With each of my encounters with people at Colgate was the possibility presented to me of curating a community, of entering and respecting existing communities and learning and growing through my relationships with others,” Gómez said. “We tend to gravitate towards familiarity, and when it comes to community building in a new place, that means rushing to those that make us feel comfortable and safe… If I have learned anything at this institution, it’s that I can form connections with anyone, anywhere, and to be the best person, I can [and] must do this, and so should you.”

The in-person Commencement Ceremony, which took place the morning after the Baccalaureate, began with a formal procession of the graduating seniors led by a bagpipe troupe, followed by opening remarks by Provost and Dean of the Faculty Tracey Hucks, University Chaplain and Protestant Campus Minister Corey MacPherson and President Brian Casey.

In his delivery, Casey emphasized the extraordinary circumstances surrounding the graduating class’s time at Colgate, which he said were bookended by major national elections, as well as characterized by the COVID-19 pandemic, racial reckoning and political divides.

“Something important happened to you and because of that you’re a group to be noticed, a class to consider. Yours will inevitably be the class that the alumni magazine will someday write about, will ask: ‘What was it like?’ The story of you is already a dramatic story. History unfolds slowly, and the story of you and our times will take time to develop, but I have no doubt you are now entering a changed world,” Casey said.

Following Casey’s address, Hucks led the Conferral of Honorary Degrees, granted to individuals that have influenced the world and its progress, Hucks said. The first Honorary Degree of 2021, the degree of Doctor of Humane Letters, was conferred to Her Excellency Doctor Joyce Bonda, the Republic of Malawi’s first female president (2012–2014) and Africa’s second female president. The second degree, Doctor of Science, was conferred to Doctor Temple Grandin, Professor of Animal Science at Colorado State University, animal expert, advocate for autistic populations and author, and the last Honorary Degree of 2021, Doctor of Civil Law, was conferred to Administrator of the United States Agency for International Development Samantha Power, who also served as the 28th U.S. Permanent Representative to the United Nations.

Power, originally chosen as the speaker for the Commencement Ceremony for the class of 2020, instead prepared a pre-recorded virtual address for 2021 graduates and Commencement attendees, speaking on the effect of the pandemic in shaping the role of the graduating class of 2021 in the world.

“Here’s the welcome reality: this pandemic will end… But the key question is this, Colgate graduating class of 2021: what will you do with this reclaimed future? …Will we simply go back to the way things were before or will we make the choices we need to make? We can come out of this pandemic not just stronger than we were before but more humane. [This is] one of the few times in human history when everyone on the planet has had their life changed at exactly the same time. If you [make the right decisions], I promise you’ll discover a much more meaningful way of living,” Power said.

Administration presented graduates after Power’s address, and Commencement ended with MacPherson’s presentation of a benediction and a digital performance of “Colgate Alma Mater.”

During planning, the Commencement Executive Committee, in partnership with the Emergency Operations Center (EOC), was responsible for reviewing changing COVID-19 policies, meeting with students in the graduating class, members of the village community, parents and others to meet both proper Health and Safety guidelines and student and families’ expectations, according to an update sent by Casey on Thursday, March 4. As a result of these discussions, the date of Commencement was moved a week up, from May 16 to May 9 in order to reduce potential student departure from and subsequent arrival on campus in the gap between finals and Commencement.

The venue was also shifted to Andy Kerr Stadium to meet social distancing requirements set by New York State. The decision to allow a maximum of two registered guests per graduate was announced by the Commencement Executive Committee on April 20, though the Baccalaureate Commencement and torchlight would be livestreamed for all to watch if unable to attend the in-person event.

Casey ended his emotional address to the class of 2021 with mention of their return for reunion.

“In a few years time — and it will go fast — you will come back here for Reunion. And I promise you this: I will be waiting for you on Broad Street, with my dog, and all the buildings will be lit and there’ll be a huge tent to welcome you on the top of the hill and we will celebrate joyfully, loudly, and together, celebrating all that you did and all that you are and all that you went through and all that you accomplished. And, on that day, it will be so good to see you.”