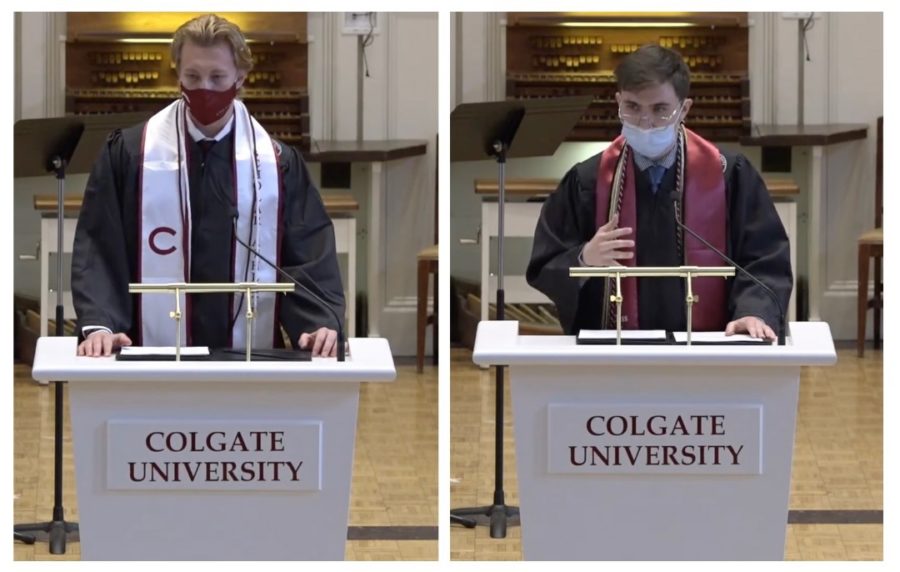 2020-2021 winners of the 1819 Award Paul McAvoy (left) and Jack Gómez (right) addressed their fellow seniors, faculty and guests at the Baccalaureate Service during Commencement weekend.

President Brian Casey announced seniors Jake Gómez and Paul McAvoy as the 2020-2021 winners of the Colgate Alumni Corporation 1819 Award in an email sent to all students on April 30.

The 1819 Award was the most prestigious among the many annual student awards announced at the end of the academic year, including Dean of the College, college-wide and department-specific academic awards.

In an email to the student community in early February, Vice President and Dean of the College Paul McLoughlin called for nominations for Colgate’s 1819 Award, given annually to a member of the Senior class whose “character, scholarship, and service exemplify the best of Colgate,” according to the University website. The yearly recipient(s) gives remarks to the graduating class and guests at the Baccalaureate Service during Commencement weekend.

Nominations for the award are reviewed by a selection committee that includes the Dean of the Faculty, Dean of the College, faculty representatives, Vice President and Director of Athletics, the University Chaplain, and the Director of the ALANA Cultural Center.

Different from prior years when the award has been given to only one winner, Gómez and McAvoy shared the 1819 Award.

From Castaic, California, Gómez is a Benton Scholar and Peace and Conflict studies and Middle Eastern and Islamic studies double major. He has been involved in the Colgate community as a leader of DDT, a hip-hop dance group, a tutor for the Utica refugee tutoring, the co-founder of Colgate’s Model Arab League and Vice President of the Senior Honor Society.

Gómez detailed his reaction to receiving the award, as well as his most rewarding moments at Colgate.

“I was surprised and definitely still experience some imposter syndrome, mainly because everything I have done at Colgate has been alongside exceptional individuals, so I don’t think I can take stand-alone credit for one thing that I’ve done,” Gómez said. “I am, of course, so appreciative of the honor. Still, I think my winning of the award is more a win for the initiatives and moments I have helped facilitate beside other extraordinary students. The most rewarding part of my Colgate experience has been finding a sense of community here. To have friends who are students, staff, faculty and individuals within the broader Hamilton communities is very special.”

In his baccalaureate remarks on May 8, Gómez reflected on his and his class’s experience of building community.

“I do not intend to trivialize anyone or thing with these questions but rather illuminate a problem I have seen and contributed to throughout my four years at Colgate. We tend to gravitate towards familiarity and when it comes to community building in a new place, that means rushing to those that make us feel comfortable and safe. Instead of celebrating difference, we turn away from it,” Gómez said. “I’ll tell you that despite the experiences I listed, I look to continue to change my own answers to those questions. If I have learned anything at this institution, it’s that I can form connections with anyone, anywhere, and to be the best person I can, I must do this, and so should you.”

President Casey’s email to the student body in late April also included comments and remarks from those who nominated Gómez and McAvoy.

Paul McAvoy is a double major in Psychological Science and English from Richmond, Kentucky, and has completed an honors thesis in both majors. On campus, McAvoy is the captain of varsity men’s hockey, a campus wellness advocate, a Maroon-News staff writer, a member of the Student-Athlete Advisory Committee and a volunteer with various organizations on both local and national levels.

“Paul is an unselfish individual who always puts the team first. His dedication and commitment to his craft and his teammates are unparalleled on this team,” Casey wrote in his email.

Reflecting on his reaction to receiving the award and his broader Colgate experience, McAvoy said he was humbled to even be nominated.

“I am humbled to be recognized alongside someone as accomplished as Jake. To even have an in-person ceremony was a tremendous feat, and it speaks volumes to the constant efforts of every staff and faculty member who worked to make this happen throughout the year,” McAvoy said.

McAvoy reflected on the challenge of remaining in the present in his baccalaureate remarks, urging his peers to enjoy the moment during their graduation weekend before they look too far ahead for what’s to come.

“It’s often the things we never take the time to reflect on that I’ll remember the most,” McAvoy said. “Class of 2021 — be proud of what you’ve done and all that you are going to do, but first, take it all in during these final days.”