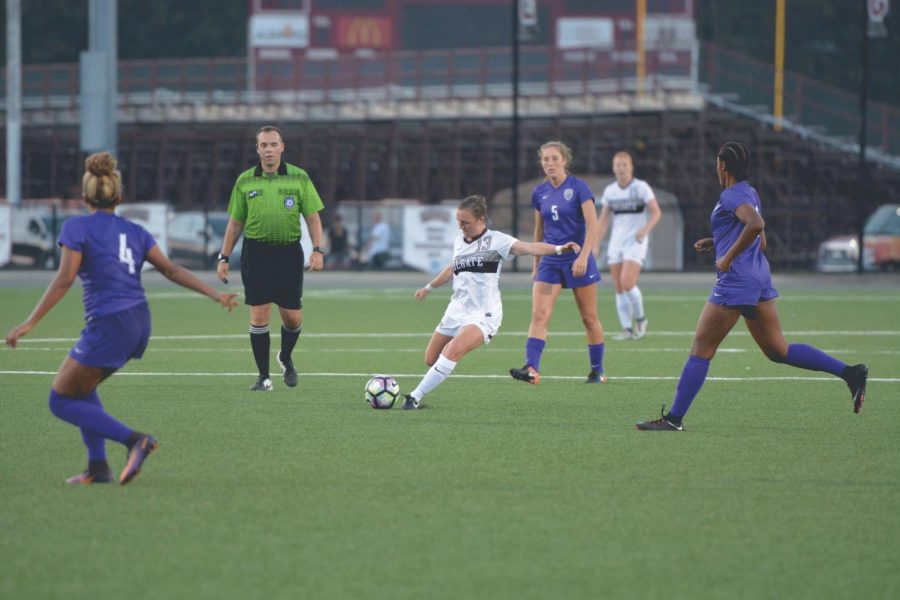 Senior captain Keely Lockwood and junior midfielder Nicole Gavin express high hopes for their upcoming  season.  Despite the team’s loss to LSU, the team believes that it will be able to make the necessary adjustments.

The many hours of preseason practice and conditioning in the heat was finally put to the test at the Raiders season opener on Sunday night. Although the team was unable to clench the “W,” it was a strong showing. The team is brimming with talent and its culture of determination and commitment showed. The team is led by seniors Emily Crichlow, Eliza Doll, Keely Lockwood and Head Coach Kathy Brawn who is heading into her 27th season. Among the returning players, three of last season’s All-Patriot League selections Doll, Abby Sotomayor and Dom DeMarco will be back and better than ever as they work toward the 2017 Patriot League Championships.

The Raiders fell to SEC-foe LSU 3-0 on Sunday night at the team’s home opener on Beyer-Small ’76 Field. Despite outshooting the Tigers 25-17 and a 13-6 second-half advantage, the Raiders were unable to put the ball in the back of the net. Sophomore Leah Lewis came close to tying the game late in the first half when her header scraped wide past the pipe. Doll had a scoring opportunity five minutes into the second half with a free-kick just outside the 18-yard box, but LSU’s goaltender Brockmeier made a solid stop. With this loss, Colgate drops to 0-1-0 and LSU improves to 2-0-0.

Lockwood and junior midfielder Nicole Gavin sat down with The Colgate Maroon-News to discuss the preseason and the prospects for their upcoming season.

Keely Lockwood/Nicole Gavin: We kept the ball really well against LSU and made a lot of chances for ourselves, but couldn’t finish. In the end, they were able to capitalize on our mistakes.

MN: How was preseason?

KL/NG: Preseason went really well, we are really close as a team and all have high expectations for the season.

MN: Prospects for the season?

KL/NG: Our team has a lot of depth this year and we think we have what it takes to win the Patriot League this year.

MN: What were the best and worst things about preseason?

KL/NG: Best was definitely going on a team hike at Old Forge in the Adirondacks. The worst would have to be the soreness from all of the conditioning and practice.

MN: You’re on the road right now for your next two games, could you give me a briefing on the teams you will be facing and Colgate’s game plan?

KL/NG: UNH is 2-0 right now and are really high pressure, so we want to stay composed and look to exploit them when they over commit on plays. Boston College is an ACC team that’s really good at controlling the areas at the top of the 18-yard box so if we can beat them in those areas that’ll be big for us.