Question of the Week: Who Will Be the Biggest Fantasy Football Bust? 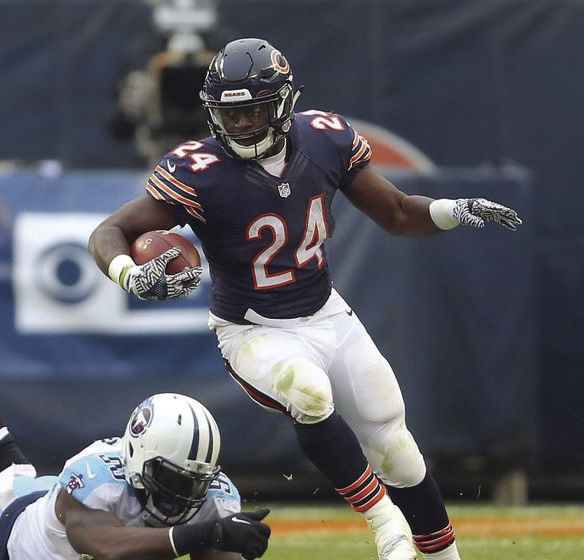 Disclaimer: The same guy writing this article about fantasy football left Chiefs rookie running back Kareem Hunt on his bench this week, who promptly scored three touchdowns, broke an NFL rookie yardage record and finished with over 45 fantasy points. Do as I say, not as I do.

The biggest bust in fantasy football this season will be Leonard Fournette. The rookie Jaguars running back was the 4th overall pick in last year’s draft. He was electric at LSU, and holds school records for yards per carry (6.2) and rushing yards per game (119.7). His highlight videos rack up millions of hits on YouTube, and he’s generally being ranked as one of the top 25  fantasy players in the league.

Jacksonville has never really had a game-changer on offense. Do people really think that’s going to change with Fournette? Even if he is a stud, he’s running behind a line made of wet cardboard and his quarterback couldn’t hit water if he fell out of a boat. He would be the only threat on offense, defenses would catch on and you can kiss your fantasy points goodbye.

That’s assuming Fournette can even make the jump from college to the pros. Who knows if Fournette has what it takes to play in the NFL? Fantasy football is all about risk management, and drafting Leonard Fournette highly is just asking for him to be a huge bust.

As football season is upon us, so is one of the more popular forms of casual gambling: fantasy football. Everyone wants to draft the big-name players that they believe will make their team better; but we also must be aware of the dreaded bust. No one wants to draft the guy who constantly underperforms but has a big enough name and a high enough draft ranking where you can’t seem to bench him. Each season contains notable names who disappoint, and this season of fantasy football will surely be no different. The biggest bust of this season will be Marshawn Lynch.

There are several factors that point to Lynch having a bust season for the ages. First, he remains a big name despite having sat out for a whole year. Next, he had a very disappointing 2015 campaign. Father Time has the advantage over everyone, and Lynch, at age 31, is no exception. Last, his ferocity and running style are not conducive to his longevity.

Casual football fans’ memories cloud their judgment on Lynch. Sure, he is a fun guy to watch, and a witty and stoic personality keeps him in the fans’ hearts and minds. While he has found a new home in his native Oakland, and the Raiders offensive line is markedly better than that of his former Seahawks, all signs point to him putting up a disappointing season. Now this is not to say that Lynch will be the worst running back. He is certainly worth a start in most 10-12 team leagues. But compared to his projected fantasy ranking (32), he simply will not live up to the hype.

The biggest fantasy bust this year will be Jordan Howard. The Bears’ running back had a break-out season in 2016, putting up over 1,300 yards, even though he started the season as the third-string running back. After injuries to the Bears’ top two backs, Howard took the starting job and never looked back.

Yet, as we saw last year with former Bears’ running back Jeremy Langford, no job is safe in Chicago. Langford was in a similar position with the Bears last year after the departure of longtime back Matt Forte, exceeded all expectations and where is he now? He’s on the Ravens and isn’t expected to touch the ball this season. Jordan Howard is quite possibly the next Jeremy Langford.

After week one, the number one running back spot on the Bears is Howard’s to lose, especially with the emergence of Tarik Cohen. Cohen, a rookie out of North Carolina A&T, rushed five times for 66 yards and caught eight passes for 47 yards and a touchdown. Cohen is only 5’6”, but his strength and speed make him seem like your average-sized back. Howard got more carries on Sunday, but gained only 52 yards.

Next week’s match-up against the Buccaneers should be interesting. I wouldn’t be surprised if Howard and Cohen split carries given Cohen’s performance last week.

If you have Jordan Howard on your team, I would trade him now so that you could still get solid value back. If you wait too long, Tarik Cohen may steal the starting spot and end up derailing your fantasy football season.