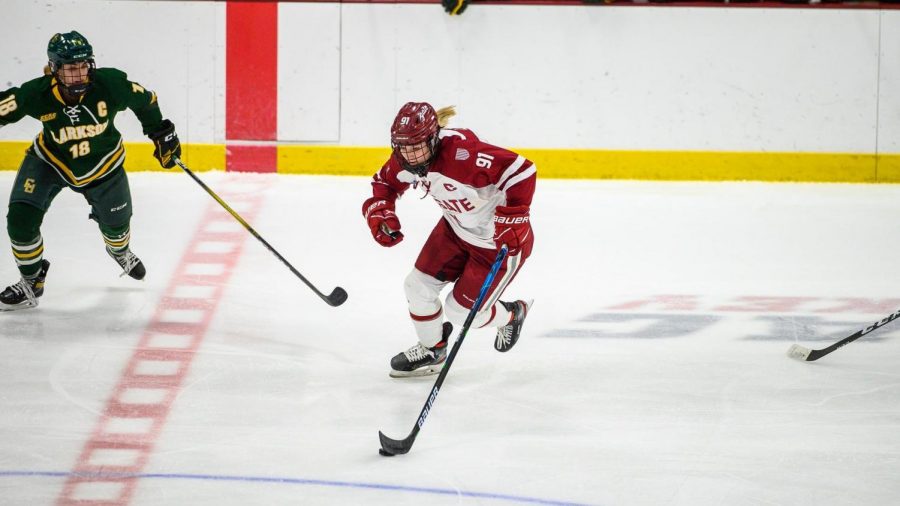 The NCAA Woman of the Year program was established in 1991 and honors the achievements of graduating female college athletes both on and off the field. This year, the Colgate Women’s Hockey Team had the honor of having one of their own, Coralie Larose ‘21, nominated for the award.

Larose served as a two-time captain of the Women’s Ice Hockey Team and helped the Raiders to two NCAA tournament appearances over her career, including an ECAC Championship in 2021 and a national championship appearance in 2018. In addition to her athletic achievements, Larose organized the Inclusive Learn to Skate program, where the team taught children with various disabilities how to skate while creating an environment where they could grow as individuals. She also led the team’s initiative to raise awareness and funds for autism.

For her recognition as an athlete, Larose was presented the Don Palmateer Award, given to the player whose leadership, inspiration and performance has had the greatest impact on the Women’s Ice Hockey program. Larose also won the Women’s Athletic Director’s Leadership Award, presented to the female athlete who best represented Colgate Athletics and displayed the department’s values of being thoughtful, driven, enthusiastic, cohesive and bold.

Off the ice, Larose continues to be an inspirational member of the Colgate community. Larose was a member of the Student Athletic Advisory Committee, helping facilitate positive change for fellow student athletes. She is a French tutor to young students in the Hamilton Community, as well as a volunteer for the local first grade class to help students learn to read and write. Larose also has weekly calls with members of Pathfinder Village, a community of people with Down Syndrome and other developmental disabilities.

In the classroom, Larose concentrated in educational studies and French, graduating with a 3.76 GPA. She is a three-time ECAC Hockey All Academic Team honoree, three-time Raider Academic Honor Roll member, as well as a 2019 and 2021 AHCA All-American Scholar. Larose was named the ECAC Mandy Schwartz Finalist, and awarded with the LGBTQ Studies Award for Academic Excellence, which represents Colgate’s recognition and appreciation of her distinguished academic achievements.

“It is an honor to be recognized with this nomination. To think that I am one of 535 nominees for this prestigious award out of over 220,000 women competing in the NCAA is unbelievable,” Larose said. “[This nomination represents the ability to] sincerely make a difference in little girls’ lives and to continue to inspire all other female athletes to see what they can accomplish in sports.”

Larose’s co-captain Malia Schneider said Larose is the ideal teammate on the ice.

“She is supportive and kind, but is also someone who will say what needs to be said. She helps others to be their best and holds her teammates accountable. She has definitely helped lead this team to the success that it has had,” Schneider said.

However, Schneider believes who Larose is off the ice is what truly makes her stand out.

“In my eyes, Coralie’s nomination for the NCAA Woman of the Year is no surprise. Coralie has an outgoing personality that comes with kindness, love and compassion,” Schneider said.

“Coralie is such a well-rounded person who was a role model for others. She has this exceptional ability to connect with people and she cares deeply about others above herself. She was a selfless leader and captain for our program throughout her time here,” Fargo said. “Not only do her coaches and teammates know that she is always looking out for them, but she has become a trustworthy member of our community who cares deeply about the mission of Colgate and our athletic department. I think she’s leaving behind a legacy in our program that others will aspire to. Her teammates respect and appreciate all these parts of who she is as a leader, teammate and friend.”

Come winter, Larose will be playing hockey professionally in Switzerland with fellow Colgate alumna Shelby Wood. Larose hopes she can continue to inspire young girls to play hockey and be leaders of their generation.