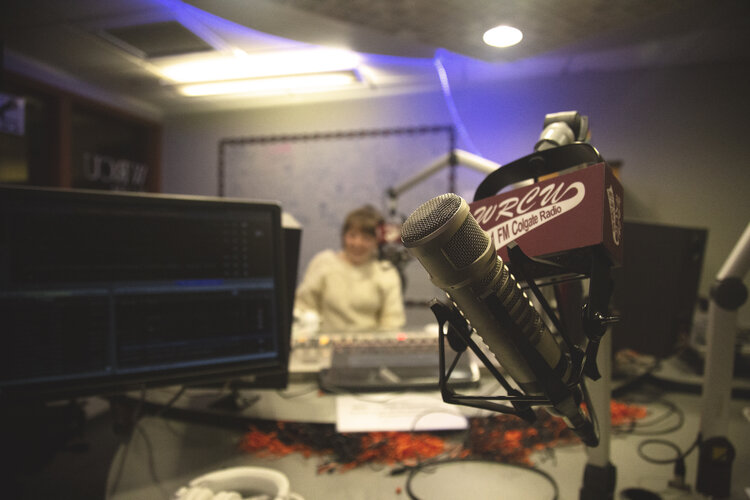 WRCU is Colgate University’s long-running, student-led radio station. The station has been providing the campus and larger Colgate community with interesting and entertaining radio programing since 1950 and, as students begin to pour in for a new school year, WRCU’s pre-orientation program has already begun cultivating the next generation of Colgate DJs.

For the past three days, a group of 12 incoming first-years have been learning the ins and outs of WRCU, including the daily operations of the radio, such as software and recording, and learning how to be creative in the recording booth. Students have been given time to explore the physical records and CDs on hand to brainstorm possible ideas and themes for shows. By the end of the program, each of the students had to create and pre-record their own 30 minute radio show to be broadcast during move-in day. One of these pre-orientation students was first-year Analuisa Furiati. Her first broadcast was a mix of the American and Latin music that she listened to the most over the past summer.

“It’s a showcase of my personality so that whoever is gonna listen to me can identify or feel what I felt when I listened to those songs,” Furiati said. “It’s pretty much [the] Latin/American infusion of a little Venezuelan girl who is entering the radio world.”

Instead of a simple playlist, Furiati created a personal journey for the listeners, which is exactly what WRCU strives to make.

Talking segments between songs are sometimes just as important as the songs themselves. These parts of the program give the heart and purpose to WRCU; they give the DJs a way to express themselves and their passions. Program Director and senior Trixie Yoo and Production Director and sophomore Ellie Markwick had a lot to say about what it takes to be a good radio host.

“Don’t treat your hour like a Spotify playlist . . . it’s like DJ-ing for real . . . you have to be deliberate and reasoned. Transitions need to make sense, placement within the hour needs to make sense,” Yoo said. “[College radio] is a break from the really commercialized radio stations that pick from the same 40 [songs] throughout the day. … You get a lot of variety with college radio, it’s a lot more personal and I think intimate than a normal radio station.”

This sense of personality was what was being taught during the pre-orientation program. For each segment, DJs are encouraged not to write out what they are going to say beforehand, but rather improvise and speak from the heart while live.

“It comes through really robotic and devoid of any life when someone is reading off a script and the audience can tell that,” Markwick said. “We want them to be doing shows about songs they are passionate about, so that when they are talking about it they don’t necessarily need a script and the enthusiasm can show through.”

Other than learning about WRCU, the first-year participants have been becoming integrated with the Colgate community. The participants have not just bonded over their shared love for music, but also activities such as going to the boathouse to kayak and having a BBQ dinner at their administrative faculty house. Beyond the music and the shows, WRCU has created its own unique home for Colgate students.

Yoo, who officially joined WRCU in the fall of her sophomore year, talked about how in the midst of other students going through the recruitment process of Greek life, and the pressure surrounding that, WRCU offered her a comfortable and welcoming space.

“[WRCU] gave me a center of my life outside of academics. And it gave me a place where I felt all of my different interests that I felt were disconnected before, I could bring them all together into one project,” Yoo said.

The community already forming in the pre-orientation was apparent. Each new student was passionate about the radio station, and all were bustling with new ideas for the future of WRCU.

This year is a special one for the entire Colgate community, as it directly follows a year of extra precautions and restrictions due to the COVID-19 pandemic. The pandemic affected every aspect of WRCU, as it did for other clubs on campus. Yoo spoke about WRCU’s experience during the pandemic.

“It felt like the whole school was just completely burnt out in a way that we had not seen before. It hurt engagement across the board and overall commitment. We had DJs dropping their shows in the middle of the semester or just not doing them. It sucked, but there was no way to get around because it was clear that it was not a radio thing and it was just the general vibe of people hating school in the middle of COVID,” Yoo said.

Coming back to campus this year, it seems that WRCU has actually grown from the initial lockdowns. It appears that there is already a stronger community being built among the radio station’s board members and fans alike. WRCU has always been a communal glue for Colgate, bringing together students, faculty, local fans and family members who tune in. And with all of the new amazing members, WRCU will only continue to bring Colgate together through the passion of radio.