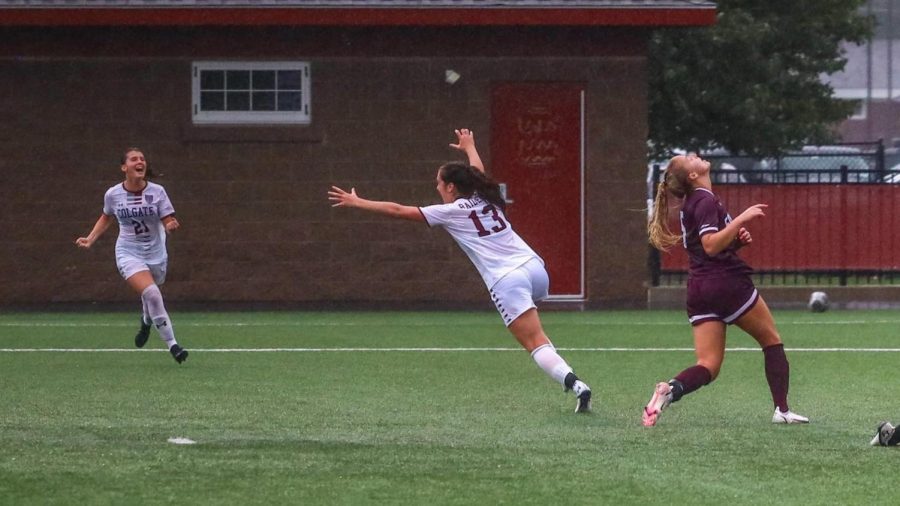 Although the air was rainy, hot and humid when the Colgate women’s soccer team stepped onto Beyer-Small Field to play Fordham University on Aug. 19, the stands were bubbling with excitement as members of the Colgate community watched in-person for the first time since March 2020.

The match, which the Raiders won 1-0, was one of the first athletic competitions after Vice President and Director of Athletics Nicki Moore announced that Colgate would “be welcoming spectators back this year” during an Aug. 12 town hall.

“It’s going to be great,” Moore added. “We really hope that our students will come out in droves, to not only support our varsity student-athletes but to connect with one another.”

The announcement came as part of a long succession of updates made to Colgate’s COVID-19 guidelines for the year, including a universal vaccine requirement, masking encouragement and an end to surveillance testing of vaccinated individuals. The university plans to balance both safety and togetherness within the Colgate community with these new policies, administrative officials added during the town hall event.

“Since we as a staff stepped on campus, there have rarely been weeks that have passed that members of the community haven’t mentioned how much they miss live sporting events,” Hokanson shared.

To Hokanson, sports provide a place for everyone on campus to feel connected and share a sense of pride. Uniting the Colgate community, students and faculty is a central goal of her coaching philosophy, which came through in the women’s first game of the season.

“The atmosphere on Thursday was amazing,” Hokanson said. “I know that the players on the field really feed off the energy coming from the fans, and we saw it provide that extra boost in moments on Thursday.”

One of these moments came in the 13th minute, when sophomore Ally Giovino scored the match’s first and only goal. The crowd oohed and aahed, cheering on many players as the team put up a strong offensive front against the Rams.

“It was fun to be called out by name again,” senior captain Ruby Diodati shared.

Diodati was excited to get back out on the field after her spring season, during which multiple games were canceled or postponed, masks were required in locker rooms and spectators were not allowed to attend games.

“It was a roller coaster of changes and emotions, though we were grateful to have a season,” Diodati said.

Senior Remy Kaufman echoed this sentiment and emphasized the sense of togetherness that accompanied the difficult season.

“We became a very tight-knit group over the restricted season. We each had an important role on the team, a spirit to uphold, and rules to follow,” Kaufman said. “I see the closeness built last season continuing to be an asset as we move forward.”

Diodati and Kaufman shared a motivation to build off of their performances in the final game of their spring season. In the Patriot League Championship match on April 17, the Raiders lost to Navy in on penalty kicks. Despite the loss, the game represented a massive accomplishment for the Colgate Women’s Soccer Team, which last reached the championships in 2014.

Their victory against Fordham signals a promising start to the season. Junior Julia Jamesley, who attended Thursday’s game alongside her fellow field hockey teammates, said she felt like the game was a win for the whole community.

“Everyone is very supportive of one another here, especially now,” Jamesley said. “Everyone in the stands wanted them to win and was so excited by the victory. Here at Colgate, you feel such a special connection whenever anyone accomplishes something like this.”