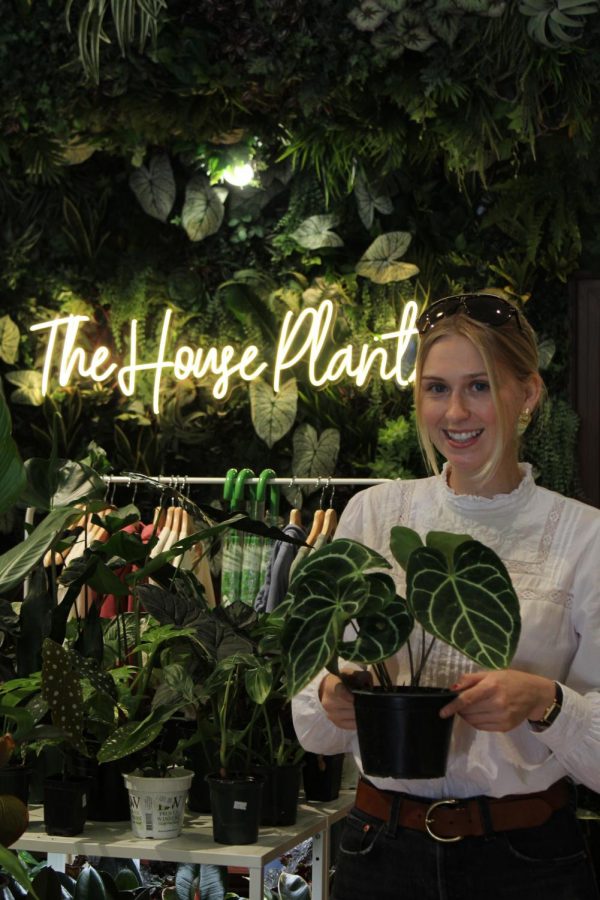 14 Utica Street, a former newspaper office, was transformed into a jungle-like houseplant store just in time for Colgate’s move-in day. The House Plant Co. had its grand opening the weekend of August 21 and has already drawn the attention of Colgate students, the local community and surrounding New York plant enthusiasts.

Molly Suba, the store manager who graduated with a degree in Environmental Biology with a focus in botany last year from SUNY Environmental School of Forestry in Syracuse, spoke to the success of the store’s opening weekend.

The House Plant Co. has been selling plants since before the storefront opened. Suba discussed the owner Derek Gager’s entrance into the house plant community.

“The business that The House Plant Company is running under is Mountain View Greenhouses in Sherborne that has been open for 15 years. His mother started the garden 15 years ago and sold it to her son two years ago. He had been running it as perennials, annuals, just classic garden center up until one year ago he ordered in some house plants [and] they sold like crazy. He ordered some more, and now he’s gotten real deep down the rabbit hole and is into the rare plant imports from Indonesia, Thailand and Singapore,” Suba said.

The rare plants offered in the store were not lost on several of its visitors. Jadan Hand, a sophomore at Colgate, visited the store on Saturday, Aug. 28th, when she bought and planted a mini monstera and a Swiss cheese monstera, plants she had been looking for in several nurseries and stores.

“They have a lot of really awesome plants that can be more difficult to get, especially in Central Upstate New York. For example, the Swiss cheese plant I got, I’ve been looking for those and you can find them in a lot of nurseries but they’re typically much bigger and run around $30 dollars in 8-inch pot size, but the plant I got was about a 3-inch cube size and much more affordable and size-wise so much more manageable,” Hand said.

Reyna Stagnaro, Colgate’s own greenhouse superintendent for almost 31 years, also spoke to the rarity of plants offered in the store as well as buzz around the opening.

“I think there was a lot of variety and a lot of plants so you get that experience of walking into a jungle when you go in,” Stagnaro said. “I did see some buzz on social media, and wow, that’s really exciting. To have that building there for so long, it was the newspaper a long time before other things. To see it transformed into this wild jungle is very exciting. We haven’t had a plant store. Right now, we don’t even have a florist. To walk in and immerse yourself in so many different potted plants is a fun experience.”

Hand also spoke to the excitement around having a plant-focused store in town.

“I’m in a Facebook plant group for the Syracuse region and someone posted about it. I was one of the first comments. I was like ‘Oh my god, this is so exciting! I’m a Colgate student, this is so good, we really need a plant store like that.’ Everything has been worth the excitement; the store is really great,” Hand said.

Hand explained her excitement about the store’s addition to the community.

The excitement around the store also expands beyond its customers to its employees as Suba demonstrated when she talked about her journey to being involved in The House Plant Co.

“I had a job lined up in New York City. Graduated into [the COVID-19 pandemic] so my job was on pause. Started working at the greenhouse. So Hamilton Initiative reached out to us asking if we would open a florist and we said, ‘How about a house plant?’ Designing this and everything has been so much fun [that] I turned down my job in New York City,” Suba said.

All three — Hand, Stagnaro and Suba — agreed on the benefits plants offer to college students in particular.

“I think they’re super important in making temporary dorm housing feel more like home. I’m a big proponent for having live greenery in your space; it just helps with the vibes. And then the responsible thing is really important for college students to have that element in their space,” Hand said.

Stagnaro discussed the roots of the benefits in plants in human history in relation to their current benefits.

“Plants have been used in our culture and have been part of our society since the very beginning. For me as a scientist, there’s that aspect of fascination and amazement, but I’m also an artist and a musician and I really appreciate the line and the colors and the form, the uniqueness of each plant. If you went into a room without plants it would feel different than if you went into a room with a lot of plants. It’s welcoming. It’s part of our being where we’ve always been surrounded by outdoors, trees and nature. To bring a little bit of it inside is comforting,” Stagnaro said.

Students can support The House Plant Co. by following them on Instagram and visiting the store. The greenhouse located in 127 Ho is also open Monday-Friday 9:00 am-4:00 pm.