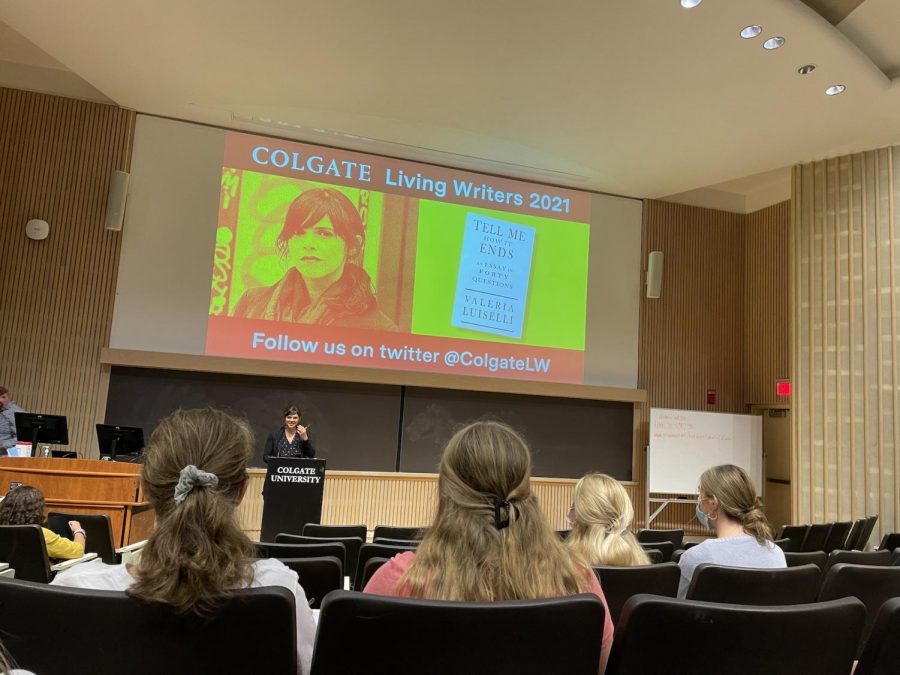 For the first time since March 2020, Colgate’s wildly popular Living Writers series hosted an in-person event with Valeria Luiselli. The Living Writers series garners students from various interests, professors, proud alumni and residents of Hamilton. On Thursday, Sept. 9, the award-winning author of “Tell Me How It Ends: An Essay in 40 Questions” attracted a full event in Love Auditorium as well as over 80 Zoom participants. The event was introduced by Associate Professor of English Jennifer Brice, who oversees the entire Living Writers program and course. The full auditorium waited eagerly to hear from Luiselli while enjoying their complimentary apple cider and donuts.

Luiselli’s critically acclaimed novel, “Tell Me How It Ends: An Essay in 40 Questions” extends a passionate and humane perspective on the American immigrant experience. Her polemic was written based upon her time as a volunteer translator for children seeking legal help during the refugee crisis. As she bridged the gap between two worlds, she drew inspiration from a desire to replace the pressure on the flawed immigration system, rather than villainizing those seeking a new life in America.

“[Luiselli] writes with staggering emotional power, and draws attention to those with fates literally and metaphorically up in the air,” Brice said.

Luiselli began her captivating presentation with a nostalgic account of her family’s road trip in 2014, when they drove from New York to the borderline of Arizona. Although geographically at the edges of our states, she profoundly notes that borderlines are the heart of America, bursting with hopes of new beginnings and a beautiful mixing of cultures.

“We drove through layers of abandoned America filled with closed motels and empty diners,” Luiselli recounted.

As the author continued on her road trip, she learned about the crisis through magazines, AM radio and newspapers that her family bought in several different cities along the way. Luiselli absorbed many different viewpoints on the system before eventually deciding to actively involve herself by becoming a translator.

Luiselli’s presentation not only explored her novel but also provided an opportunity for attendees to understand the process of American immigration through the United States-Mexico border from her own personal experience. Her experiences translating for children garnered a wealth of stories told in broken pieces, wrought with unhappy endings and unanswered questions. The author’s recollection of the fear, shattered hopes and tensions imposed upon those seeking refuge brought a sense of empathy that cannot be matched by any news articles or history books.

“Why did you come to the United States?” was a question repeated several times by Luiselli during her time as a translator.

This question was never followed by a clear answer. More absurd queries would follow, such as , “Have you ever committed a crime of low integrity to your knowledge?”, “Are you a member of the Communist Party?” and even “Do you intend to practice polygamy in the United States?” These are only a few examples of what refugees were asked  in order to determine whether or not they would receive an attorney to take their case.

Luiselli writes in a personable and often sympathetic tone all while managing to include blunt information, vibrant descriptions and nostalgic accounts of her experiences. She beautifully conquers important topics from which most people shy away, and for the entirety of her presentation and reading managed to fully engage with the attendees. Her fascinating tales of childhood, solitude and bittersweet reminiscence are not to be missed.

“[We must] step away from the feeling that we only need to document the present,” Luiselli asserted as she concluded her talk.

The Living Writers program’s start to the semester was a perfectly sentimental mixture of poignance and inspiration. While Luiselli’s discussion about her writing process shed light on her personal experiences as an immigrant and volunteer translator, it also stressed the power of actively involving oneself with important issues in hopes to create positive change, something that is crucial in the novel Tell Me How It Ends: An Essay in 40 Questions and within our community at Colgate.