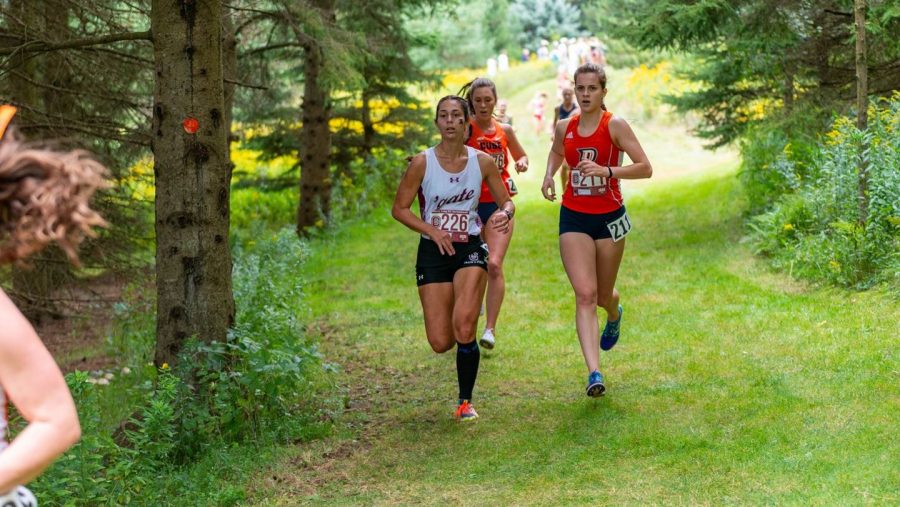 MIND YOUR MANNERS: Runner Sophia Manners came in first in the 4.8 kilometer race against Syracuse, winning the race by just under 20 seconds.

On Sept. 4, Colgate Women’s Cross Country had a home meet against Syracuse, their first and only home meet of the season. The team ran a 4.8k race, equivalent to about 3 miles, on the Harry Lang cross country trails. Senior Sophia Manners won the race, giving her a seemingly dream start to the season.

“There was great energy, especially with so many alumni there,” she said, adding that it helped to have such support against Syracuse, a great program with a lot of talent, especially in the first and only home meet of the season. Manners won by almost 20 seconds, leaving her competition in the dust after the first mile.

She also spoke glowingly of her teammates. “We have a strong set of juniors below me,” who have a whole season ahead of them to improve.

Even looking past the juniors, the whole team is strong and has come out ready to compete this year.

“We had our best place finish at Patriots in 10 years” last season, and Manners sees it as something to build on. “Our end goal is to do even better,” building on the tremendous progress they made in a COVID-clouded 2020-2021 year.

When asked how this year compares to the last, obviously COVID-19 was a main factor.

“Running in masks was very restrictive” and in general Sophia feels it’s more natural and thus much more fun to run without masks.

Since most will probably only see her first place medal, it’s easy to forget about the amount of preparation that goes into the sport of cross country. This summer’s training regimen ensured that there really was no off-season for running. By the end of the summer, Manners and her teammates were logging similar miles to what they run during the season. Manners herself ran 70 miles per week at her peak — taking into account a knee injury she had in July. While she was worried that her progress would go to waste with the injury, the cross-training she did while she was recovering actually provided a good break. Her teammate, junior Emma Pizer, recognizes this work ethic.

“I’ve watched Sophia consistently train harder and harder, putting in the effort everyday and every practice,” Pizer said. “She really stepped it up over the past months and seasons leading up to this meet, so I’m beyond proud of her win.”

When returning to campus in August, there was immense uncertainty surrounding the coaching staff of the team. That only added to the adversity the team had already experienced, as they also had one of the shortest preseasons of any sports team at Colgate. Luke Burdick, a coach at Colgate for 13 years, suddenly quit, citing the desire to spend more time with his family. Such a change right before the season started was challenging to the team. Burdick had designed the summer training program and the athletes had been used to him. Stepping in to replace him was Harlis Meaders, who was already on the coaching staff. Although Meaders had been in the track program since 2019, he was a throwing coach. Certainly, there is a lot of adaptation to be done between coach and team, but Manners says it’s been a good start so far.

“He’s very receptive and puts a lot of time and energy into the team and learning more about cross country,” Manners said.

Last year, Manners missed second team Patriot league by four spots and if her first race is any indication, she is looking to lock up a place on the second team at the very least.

“I love the team, the meets, and the whole environment,” she said, declaring that this season “will be the best so far” of the four she’s had at Colgate.