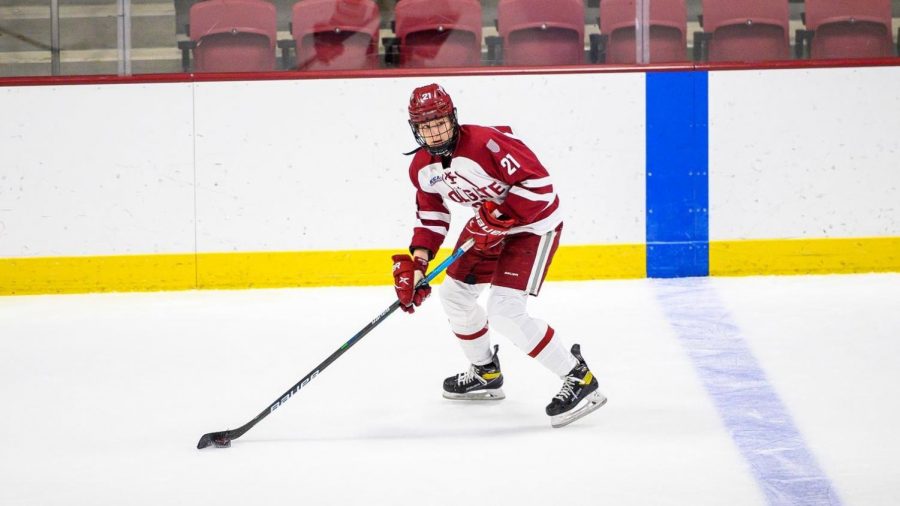 FINDING NEMO: Senior Nemo Neubauerova represented her home country of the Czech Republic at the 2021 IIHF World Championships in Calgary.

Colgate Women’s Hockey senior Nemo Neubauerova recently represented Team Czech Republic at the International Ice Hockey Federation World Championships in Calgary, Alberta. The Maroon-News sat down with Neubauerova to talk about the overall experience of competing in the tournament.

Q: How did you first get involved with the Czech National Team? What was it like to be with the team during the tournament?

A: “I’ve been with the team for a couple years now. You start with U-16, then move up to U-18 and eventually play with the Olympic team.  This tournament was kind of different due to COVID and everything — we had to be in a bubble before we left for Calgary and once we got there, so I spent about a month with the team. When we were there in the bubble, we pretty much just went from the hotel to the rink.  But it was great to be there.”

Q: What was that month like with the team?

A: “Pretty much my whole team I had played with before because we had moved up together from when we were younger, so I knew all of them and I definitely got closer with them too, which made it a great experience. It was great to be with the team for this long, which we had never done before, so it was definitely fun.”

Q: How did it feel to finally hit the ice and represent the Czech Republic?

A: “It was great, especially with the last World Championships being canceled. It had been a long time since we had played these intense games, so it was just awesome. A lot of the other teams had really improved over the last two years, so it was great to compete.

Q: What was your level of familiarity with your coaching staff?

A: “They were all a pretty new coaching staff because it switched about a year and a half ago. We had to adapt to this whole new philosophy of play that was kind of new to all of us, so it was a bit hard to do all of that. The main thing was that the coaches were really big on the little details, like stopping on the puck if you lost it. It was all based on working really hard and skating a lot– if you make a mistake, or even if you don’t, you have to keep skating all the time. That was the biggest thing. But they were great and super caring for us.”

Q: What memories or moments stick out to you most from the tournament?

A: “Honestly just anything with the team– we would get together and play card games on our days off, so that kind of stuff was always fun. Obviously, the games made for the best memories– just doing what we had to do with our strategy and everything, and sticking to it. Anytime I was with the girls, which pretty much was all the time, was so much fun. The game against Finland was one of our best games. We worked really hard and played really well, and it was really unfortunate not to win that game. Finland won the bronze medal and are literally the third best team in the world, so knowing that we can play with them and beat them too just tells us we can do really well in the future.”

Q: How excited are you for Colgate’s season, and what are you looking forward to the most?

A: “I’m so excited and I can’t believe it’s my senior year. I’m still getting to know the freshmen, so I’m just excited to get to know them more and finally play that first game with all of my teammates. I’m just so excited.”