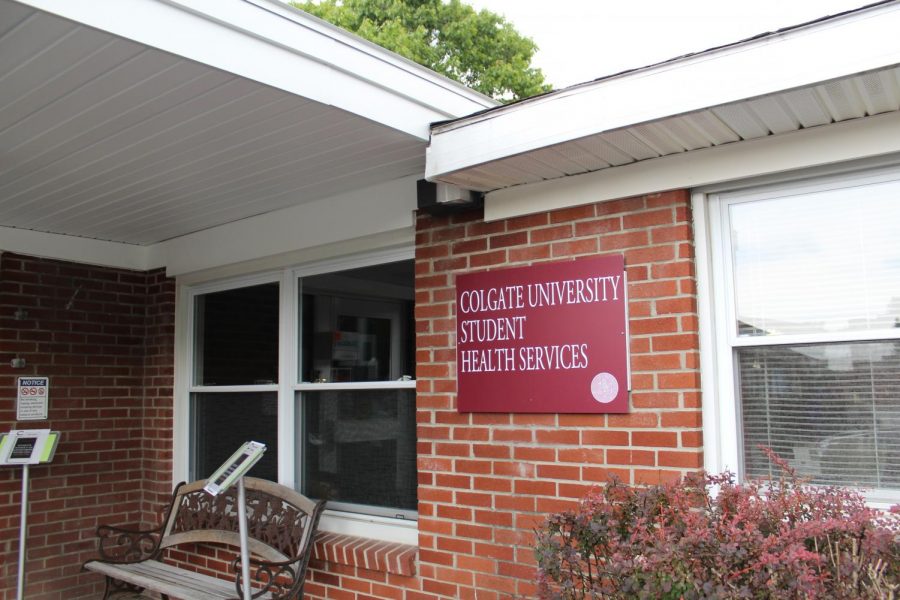 TESTING CONTESTED: Testing takes a new form after virus cases surge on campus, making it more difficult for students to access a test through the University.

Editor’s note: this story has been updated to remove incorrect information about worried well testing. Worried well testing is currently available Mondays, Wednesdays, Thursdays and Fridays from 11 a.m. to 1 p.m, by appointment.

As confirmed COVID-19 cases climb across campus and the Village of Hamilton, the University has put new rules in place for testing and potential isolation.

Students began the year with a requirement to take two tests, one upon arrival and one five days post-arrival, to attend classes and in-person events. After completing the arrival test protocol, testing was only required for unvaccinated students.

As cases surge across campus, testing is being limited to students exhibiting serious symptoms or identified close contacts. Testing for ‘worried but well’ individuals is not available through the University at this time. Director of Student Health Services Dr. Merrill Miller has expressed that this testing protocol is consistent with recommendations from various health practitioners.

“As with all of our public health measures throughout the pandemic, we remain committed to following the science and doing what is most effective to support the wellbeing of our community,” Miller said. “While the Delta Variant is more contagious than the original SARS-CoV-2 virus, our high vaccination rate helps to prevent serious illness, and most cases that have been identified on campus are in those who are either not showing any symptoms, or who have very mild symptoms similar to a common cold.”

Only students who have been deemed a close contact or who are exhibiting symptoms must get tested, according to Miller.

“Vaccinated students do not need to seek testing unless they are identified as a close contact, or should they exhibit symptoms that would typically result in a doctor visit — sore throat, high temperature, persistent cough, severe headaches, etc,” Miller said. “Any student who is immunocompromised or unvaccinated should contact the Student Health Center to seek care if they have any symptoms.”

“Weekly, required testing for unvaccinated individuals will continue to take place in the tent adjacent to James B. Colgate Hall on Tuesdays from 11 a.m. to 1 p.m.,” Jack said. “Close contacts are also allowed to get tested 3-5 days after exposure, so many people used outside sourcing for getting tested.”

While wait times and appointment requirements have made on-campus testing challenging, students have resorted to utilizing outside testing options, such as self-administered swabs purchased at local drug stores. This new testing policy is a departure from the bi-weekly testing that was required for all students last year, regardless of symptoms or close contact status.

“It’s a little odd considering how crazy they were about it last year. It honestly makes sense as a policy but I think it was nice to know I have COVID[-19] because all of our symptoms were so bad — no smell or taste and trouble breathing. So I guess it just depends on individual preference for testing,” Fraser said.

Once testing positive, students are required to isolate. For individuals who reside further than 400 miles from Hamilton, the University is supporting isolation efforts with various sites near campus including 76 Broad Street Housing, as well as temporary use of the Colgate Inn, according to Associate Vice President for Emergency Management, Campus Safety, and Environmental Health and Safety Joe Hernon.

Junior Ava Wigdor notes that when she was required to isolate, it was surprising that she was forced to depart campus and could not utilize local options.

“Because I live under a certain radius from campus, I was told it was preferred I go home unless there was an immunocompromised individual at home,” Wigdor said. “I think it probably has to do a lot with the lack of quarantine housing available on campus.”

Students who live in a different state were asked to comply with the quarantine protocols of their home state, according to junior Lexi Cavallo. Also, students who tested positive were unable to take public transportation home, which presented another obstacle for safely quarantining.

With no classes being offered virtually this semester, students who are required to depart campus to isolate are left to negotiate the terms of completing coursework with individual professors, which Cavallo believes could lead students to resist testing to avoid falling behind on classwork.

“I think the University had a good COVID[-19] response this year,” Cavallo said. “I do think professors should be more responsive to virtual students because there is no virtual option for people who have COVID[-19] and it may make symptomatic people less likely to get tested so they don’t fall behind on school.”