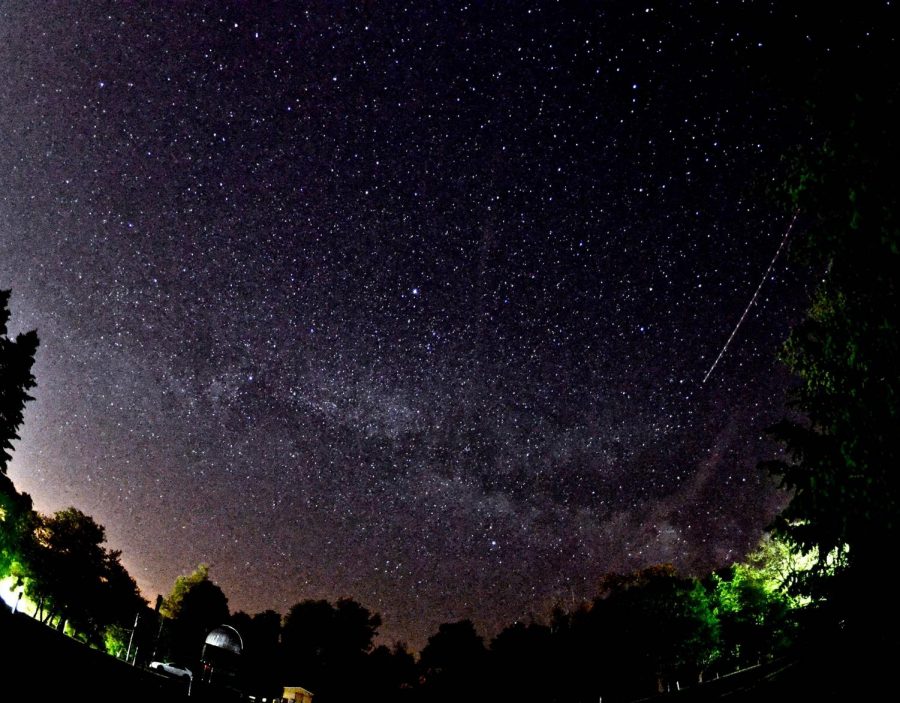 STARS AND STORIES: Colgate community members gathered this past weekend in the Ho Tung Visualization Lab to watch live-projections of the night sky, accompanied by Greek mythological tales of the constellations.

This weekend, Colgate community members had the opportunity to attend a live tour of the night sky at the Ho Tung Visualization Lab. The event, titled Starry Skies over Central New York, took place at 7:15 p.m. in the planetarium known as the “VisLab.” Trained students took the audience through a delightful show that enumerated the current constellations in our night sky. The students are able to work in the VisLab no matter what their major is and are trained on using the Digistar 7 program to operate the planetarium. For the different shows, the students are given the ability to create their unique script and presentation.

As junior Charlie Filipovich said, “Each student creates their presentation, adding their own ‘flavor’ to their talk, with some focusing on lesser-known myths from Native American cultures, to others that like to give a tour of the planets within our solar system.”

The VisLab allows for real-time projections of the night sky as well as the ability to superimpose images on top of the stars. This proved to be an extremely beneficial tool for audience members who were new to astronomy and unable to visualize the constellations without help.

The program began with presenting the Big Dipper and the popular Greek mythology behind the constellation. As the story goes, Callisto was a beautiful nymph whom Zeus took a particular liking to. Her relationship with Zeus resulted in the birth of a boy named Arcas. As revenge for her husband’s indiscretions, Hera turned the poor nymph into a bear after she gave birth. As Callisto’s son grew, he developed impressive hunting skills. As all hunters do, Arcas was out in the forest one day when he saw a large bear loping towards him. Arcas did what all hunters would and fired an arrow at the bear, but before the bear could be killed, Zeus intervened and cast it into the skies. As it turned out, the bear was Callisto, who was overjoyed to see her son again – a sad ending to her story. On a more positive note, when Arcas died, Zeus also cast him into the sky as the Little Dipper so he and Callisto could be together. A fun fact told to the audience was that the reason bears have such long tails is that in the process of Zeus casting them into the sky, their tails were stretched and are forever extra-long.

The second constellation covered on the tour was Arcturus. Modern astronomers cannot agree on what Arcturus actually is. Rumor has it that it was a shepherd, but there is no conclusive evidence. However, the Polynesian people called it the Star of Gladness because they knew when they saw it they were close to home, which for them was Hawaii.

The next constellation was the bitter old dragon, Draco. Draco was thrown into the sky by Athena, who followed in her father’s footsteps of resolving conflicts. This constellation used to be much larger and had wings, but western astronomers broke him up and made two bears out of the parts of him. He is still a formidable and ancient fixture in the sky.

The final constellation of the evening was Asclepius, the son of Apollo and the god of medicine. Asclepius was so incredible at medicine that he was able to bring people back to life. However, this impressive skill of his caused Hades’ anger at robbing him of souls. Hades then asked Zeus to kill Asclepius and to appease Hades and Apollo, Zeus cast him into the heavens.

At the conclusion of the showing, attendees got a tour of the known and visible universe. Senior Faith Christenson commented that this was her favorite portion of the event. “It was interesting to see how all the planets were aligned at that very moment.”

The images were part of a real-time stream that allows us to view our solar system at that precise moment.

All of these stories of the constellations were masterfully woven into the VisLab production, resulting in a delightful way to spend a Saturday evening. The VisLab works all kinds of miracles, Filipovich described the appeal of the programs, “From shrinking to a molecular level to travel through cellular structures to flying through the cosmos, we use the interdisciplinary nature of the dome to bring science to life in an exciting, modern way.”

Students praise the space for being fun, comfortable and cozy, but be warned – the reclining chairs may put audience members at a very high risk of falling asleep.