Campus Transformations on the Horizon 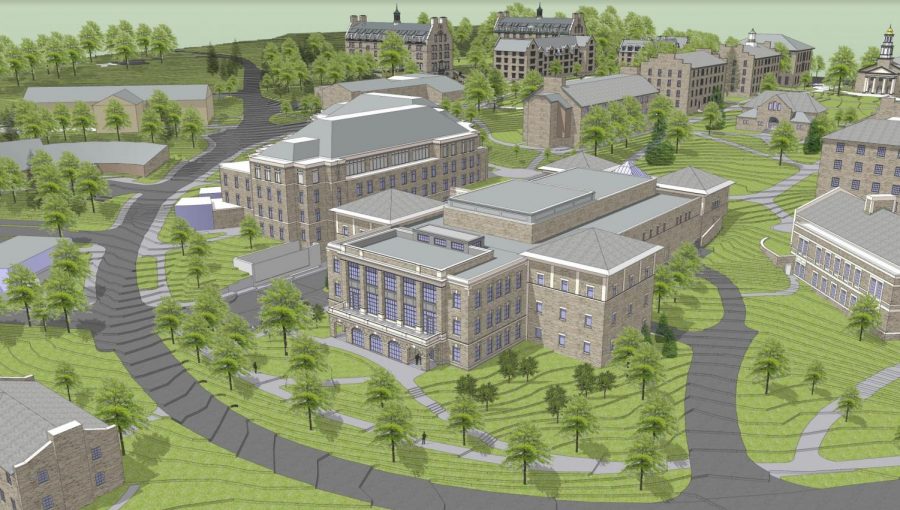 After a year spent focusing on the COVID-19 pandemic, the University is excited to progress its plans for new Middle Campus projects and renovations to major existing buildings Olin Hall and the Dana Arts Center.

These renovations and the Middle Campus project are part of Colgate’s larger Third Century Plan. In a Feb. 1 email to the student body, President Brian Casey announced that Daniel Benton ’80 made a $25 million gift to the University to fund initial phases of a major transformation slated to take place between James C. Colgate Hall and the 113 Broad Street Complex. $20 million from the donation will be allocated towards the construction of The Benton Center for Creativity and Innovation, a two-building complex housing the disciplines of computer science, film and media studies, theater and dance.

The Dana Arts center will be renamed The Dana Center for Curricular and Co-Curricular Innovation and will include spaces for theater, design, Thought Into Action (TIA) and music.

Special Advisor to the President for Strategic Initiatives Lesleigh Cushing commented on the new building and the excitement it will bring to a currently underutilized region of the campus.

“We’d like to let the building [Dana] flow more than it does right now and become much more inviting […] and accessible,” Cushing said.

The new Benton Center for Creativity and Innovation will host computer science, film and media studies, theater and dance in a two-building complex totaling 36,800 square feet. The center will include a computer science student research hub, performance and exhibition space and a media archaeology lab.

When speaking of the currently-planned campus projects, Casey noted that they will be completed in waves, as certain buildings go in and out of commission.

“The first wave of new buildings as part of the Third Century Plan are academic, so you’re going to start seeing, this spring, the preparation for the major overhaul of Olin — that’s the first thing you’ll see,” Casey said. “Olin is going to be expanded to its east […] so that’s wave one.”

“What’s really great about it is that the whole place is going to be configured to have lots of spaces for students to be with each other […] it’s exactly like another Ho [Science Center],” Casey said. “It will be another huge two-story atrium, but below, the first floor is a smaller, more intimate [space …] All of psychology, neurosciences and brain sciences, all get new labs.”

Robert A.M. Stern Architects has overseen many of Colgate’s recent campus projects – most notably Benton Hall and Burke and Pinchin Halls. The famed architecture firm has also completed other projects under the direction of Casey including the Hoover Dining Hall at DePauw University, where Casey formerly served as president.

The project initially was drafted to address the aging HVAC system in the building, but quickly developed into a much larger renovation thanks to faculty who felt that if the building were to close for a renovation.

“We might as well do this right,” Casey said, who credits the psychology and biology departments and their faculty for their commitment and foresight.

Olin Hall will remain entirely closed over the course of the renovation after preparation begins this spring. The estimated completion time stands at approximately 20 months. The project, made possible by a lead gift from generous Colgate benefactor Robert H.N. Ho, will cost between $35 to $40 million. The initiative has been named the Ho Mind, Brain and Behavior Institute.

While the building remains closed, Casey noted that Colgate is exploring temporary labs to allow research and teaching to continue.

“Dartmouth [College] recently completed a big science project and they had temporary labs, so we might rent them from them. It’s funny that you can actually move labs – which you wouldn’t think you could – but Williams [College] and Dartmouth have both just done this so we’re looking to rent their labs. It will be just like what we had last year but they’ll be labs,” he said, referring to temporary classroom structures located behind Olin Hall and at the 113 Broad Street Complex during the 2020-2021 school year to allow for social distancing.

The drawings for Olin, noted by Casey, are nearing completion, but the challenge begins as the University prepares to move people out of what Casey described as “one of our most used buildings.” This process will begin in the spring of 2022.

The Middle Campus has been a hallmark of Colgate’s Third Century Plan. Leadership believes that Colgate can focus in this space to best prepare students for the future that awaits them.

“When I first came to Colgate, it became clear to me that – for decades – we had radically underinvested in the arts,” Casey said. “To be educated for the 21st Century, you need to be versed in arts, creativity, visual life, images, and we were radically behind. I just thought that if, if we are underinvesting, if we are not educating students for the future, full stop.”

While the idea for artistic investment was initially simple, its execution became much more complicated and cross-curricular.

“When the conversation about the Middle Campus emerged when the computer scientists said ‘Wait, if you’re talking about creativity, what you’re talking about is what we do!’ So, the Middle Campus, if we think about it, is like another academic quad, created to put arts, computer science, and also TIA entrepreneurship programs together,” Casey said.

The Benton Center will occupy two sites, the first located in the area between James C. Colgate Hall and the Dana Arts Center, and the second located on the site currently occupied by Ryan Studio, attached to Little Hall.

This new building, according to Casey, will bring a much-needed update to visual and creative arts facilities on campus.

According to renderings, their exteriors are slated to follow traditional Colgate style, donning significant masonry and proportional, gabled rooflines.

The building that will be constructed on currently unoccupied space will break ground this summer, noting that its space will be needed to house classrooms currently in Little Hall, Ryan Studio and the Dana Arts Center when portions of those structures close for renovation or demolition.

The renovation of the legendary — and controversial — Dana Arts Center will likely cost approximately $20 million. An architect has not yet been publicly announced, but authors on renderings suggest it will be Allied Works — the firm behind University of Michigan’s Museum of Art as well as iconic New York restaurant, Eleven Madison Park. The timeline and start date of this project are still unknown.

To connect the Middle Campus with the Upper Campus in a more natural way, plans have been made for staircases and paths to be constructed in the ravine behind Spear House.

“We will renovate the ravine so that a staircase brings you right to Frank Dining Hall,” Casey said.

The current path requires one to walk behind the Dana Arts Center, taking stairs up to the roof, then taking stairs that lead to the road behind Curtis and Drake Halls, eventually connecting to the traffic circle adjacent to Frank.

These projects, while the closest to starting, are only a few amongst the many projects currently being developed by Colgate University.

“The pandemic paused us, but Colgate is about to begin the most significant physical transformation in its history this spring,” Casey said.

He identified the eventual replacement of Gate House, scheduled to begin a year from now. The 113 Broad Street Complex is also slated for replacement. The Gate House site will be transformed into a site similar to the new quadrangle between Burke and Pinchin Halls, according to Casey, who does note that completion of this work is a long way away.

Updates to campus projects will continue to be covered by The Colgate Maroon-News as information becomes available and construction begins.