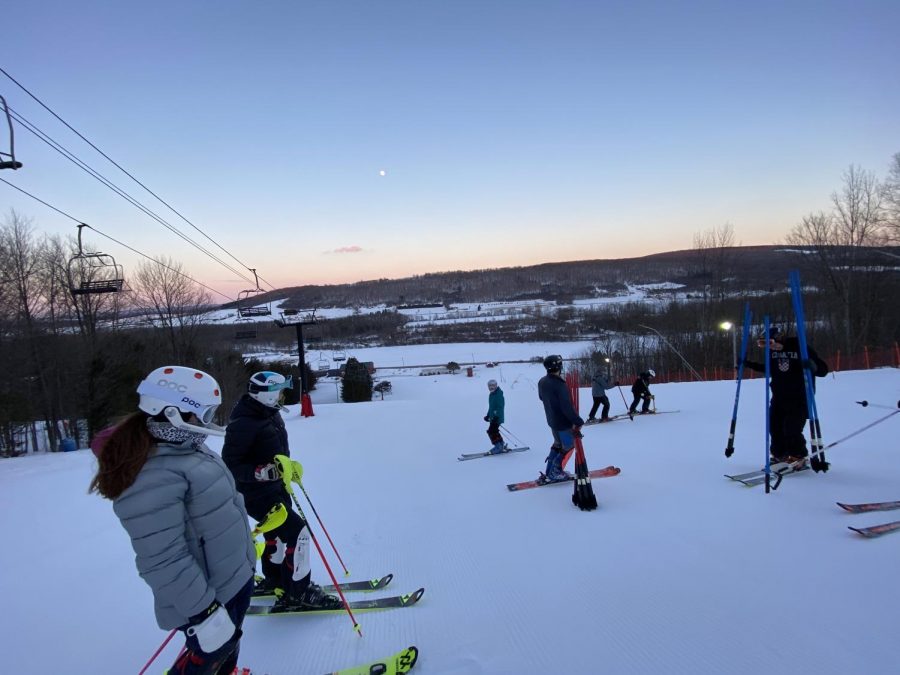 With Permission of Maddy Leibinger

Mount Toggenburg, a ski mountain located in Fabius, N.Y., has provided a place to ski for Central New Yorkers since 1953. The Colgate Ski Racing Club has trained and skied here for years but will now have to look elsewhere for a place to practice and perform.

Over the past summer, the mountain was sold and is being shut down, forcing the Ski Racing Club to train elsewhere and alter their schedule. The owner of Song and Labrador Mountains, Peter Harris, has purchased the mountain and plans to close it, and according to Syracuse.com there are “a number of reasons [for the closure].” Some of these include the labor shortage due to COVID-19 and a lack of business. Members of the Colgate community who were active parts of the Ski Team stated their thoughts on this closure and where the team is heading from here.

Junior Morgan Gregg grew up in Cazenovia, N.Y., and spent much of her time on the mountain, both on the Colgate Racing Club and as a kid during the winter seasons.

“I can say I owe most of what shaped me as a person to Toggenburg,” Gregg said. “The experiences I had there and the people and coaches I have met have had a major impact on my life because this small hill was basically my second home.”

Gregg expressed her sentimentality for her childhood second home and disappointment for the younger racers who won’t get to experience it.

“It was really disappointing to hear that Toggenburg would be sold to be closed down by the new owner. Many people in the area rely on the mountain for winter recreation and even employment, so it is sad to see something that meant so much to people become obsolete.”

According to Gregg, who is also the team’s social media manager, the Ski Racing Club is in the process of deciding which mountains are most strategic for their numbers. To date, the team is looking at Labrador Mountain, Song Mountain and Greek Peak as potential options. All locations are farther from Hamilton, making it more difficult to coordinate between members whose class times conflict with and restrict practice schedules.

Ski Racing Club President and sophomore Richard Casey commented further on the decisions being made regarding a new mountain for the team. Casey confirmed that the closure of the mountain has not only displaced the Colgate Ski Racing Club, but has also disrupted plans for the Syracuse Ski Team as well. Casey also touched on the decision process for selecting the new mountain for the team.

“While making the decision on where our new training venue will be, we are taking many factors into account, such as how many collegiate and local teams currently train at the venue, the cost for us as a team to have a spot there, and which venue will be most beneficial to our success as ski racers,” Casey said. He anticipates that the team will likely keep the schedule of Tuesday and Thursday night practices, with Saturday and Sunday races.

Colgate alum and former competitor Finn Simpkins also shared sentimental statements about Toggenburg’s closure. Simpkins looked back at his time with the Ski Racing Club fondly, but without Toggenburg Mountain in its future, he does not know what the next step will be.

“​​Toggenburg Mountain quickly became a second home to me while I was on the Ski Team at Colgate, and I felt such a sense of community whenever we would practice and race there,” Simpkins said. “My coaches Jim Longo and Todd Enders worked so hard to provide good training at Togg and created a competitive environment that allowed the team to have success during my time there. I hope that this does not turn into a setback for the team and Colgate continues to support one of the best organizations on campus.”

Simpkins also expressed his discontent in learning that the mountain was purchased to eliminate competition, as he speculated that a nearby mountain, Ski and Labrador Mountain, hopes to increase their numbers.

“I think they are taking away a place that provides an important outlet for so many people that includes both locals and Colgate students. It has been such a staple for so long and will be missed dearly,” Simpkins said.

Simpkins further emphasized the importance of the mountain to the Colgate community and how it helped the team grow and improve.

“Toggenburg mountain was the heart and soul of the Colgate ski team. It was our home away from Colgate. We would often train next to the Toggenburg ski team and it was amazing having those kids look up to us,” Simpkins said. “While Togg was special for the athletes on the team, it was even more important to our coaches, who have been coaching and skiing there for much longer than any of us have.” Although the closure of the mountain was an unwelcome setback, the team is hopeful they will have a successful upcoming season.