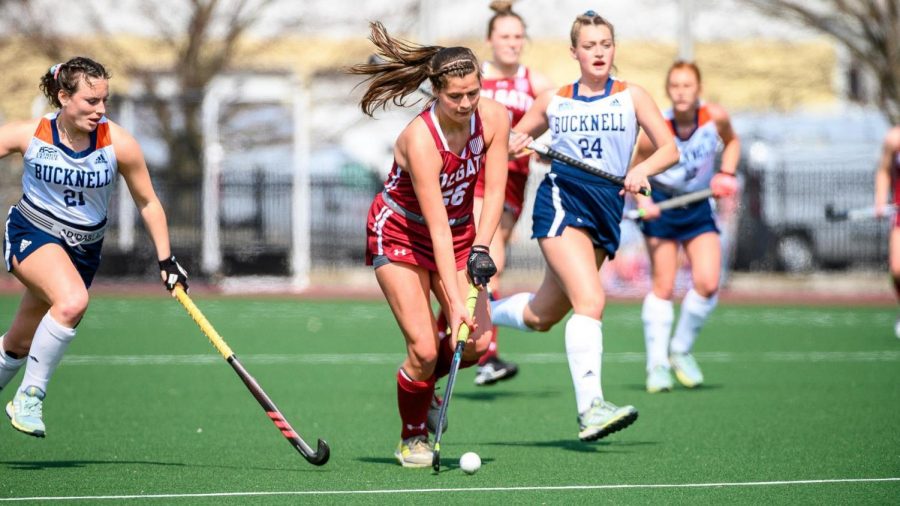 POISED FOR SUCCESS: Forward Taylor Casamassa has lifted Colgate field hockey with veteran leadership and positive energy, leading the Raiders through their 2021 season.

“I have always thought so highly of what she is capable of,” Colgate Head Field Hockey Coach April Cornell said. “It’s not every day that you see that kind of potential in a player.”

Cornell was referring to fifth-year student Taylor Casamassa, who plays midfield and forward for Colgate’s field hockey team. Cornell and Casamassa have a close and long-standing relationship. Cornell initially recruited Casamassa to play for Hofstra University, where she served as a field hockey coach until 2016. However, a few months after recruiting Casamassa, Cornell left Hofstra for Colgate.

After one semester at the University, Casamassa decided to leave Hostra and follow Cornell to Colgate.

“The girls on the team there were great, but I didn’t like the town and the school just didn’t feel right for me.”

Using her power as the recently hired head field hockey coach, Cornell helped Casamassa transfer to Colgate in the spring semester of her first year.

“Throughout both recruiting processes, Taylor and I had a great bond because she was so coachable and so focused on growing her game,” Cornell shared.

Casamassa, embraced by the women of Colgate’s field hockey team, quickly integrated into the Colgate community. She found the transition almost seamless. Casamassa soon established herself as a stand-out field hockey player, starting nearly every game during her sophomore, junior and senior year.

One of her first accomplishments came her sophomore season, when, after earning 10 points for her team, she was named to the All-Patriot League’s First Team. She was bestowed this honor again during preseason in August.

It is not just Casamassa’s skill, but her attitude, that makes her a light on Colgate’s field hockey team.

“From my first day [first-year] during preseason, [Casamassa] took me under her wing,” junior Mari Kniezewski shared. “We were locker buddies. She mentored me, not just in playing, but the mental strength it takes to be a Division I athlete.”

Sophomore Ella Corbett, like Kniezewski, has great affection and admiration for Casamassa. At the same time, she believes Casamassa’s enthusiasm represents the larger spirit of Colgate’s field hockey program.

“[Casamassa] is amazing. She just has that mentality of putting her head down and working day in and day out to make the team better,” Corbett shared. “[Casamassa’s] dedication is a testament to how much we care about the program and the process and each other.”

The team displays this spirit in different forms.

At the same time, the team is making gift baskets and signing cards for their team members in quarantine. They aim to make everyone feel included at all times, whether they are participating in practices and games or not.

“We want to remind them that we’re all here for them,” Kniezewski said of her quarantining teammates.

The team’s spirit did not waver after they faced a series of losses this season against the highly-ranked teams of Vermont, Albany, Rider, and Cornell. This spirit, this balance of aggression and love, was particularly well-embodied in Ithaca, N.Y. on Sep. 12, when Colgate played Cornell University.

“The Cornell game was a test of our adaptability as a program. It went incredibly well, despite the loss,” Corbett explained. “Everyone on our team was forced to try something new — it was an incredibly charged game.”

Against Cornell, Colgate lost 1-3. However, the Raiders were missing four defensive players who had come down with COVID-19. Because of this, not only did each girl present have to play for nearly the whole game, but many had to fill positions in which they had little or no experience.

Cornell explained that, “We played a full game, and just scoring in that fourth period, we really made our mark. We said ‘We’re here; we’re here to compete.’”

The team is excited to play Cornell again on October 3 at Tyler’s Field.

Moments before the Cornell game, Kniezewski had the team join her in a powerful activity of appreciation and friendship.

“I handed everyone a sticky note and told them to pick someone who they were going to play for in that game,” Kniezewski said. “That could be a loved one, a teammate that inspires you, a sibling, anyone. I then had people tape the sticky note with the person’s name on their shin guards. That’s a tradition I’m trying to start on the team.”

It seems that many players embody a spirit just like Casamassa’s. With Casamassa always looking out for and watching over the team, this comes as no surprise.

“I’m just glad that I can be here reassuring them that things are going to be okay. It’s not all about winning and losing. The team has a really bright future, and I hope they understand that.”