James Ortiz Joins Colgate Community for Screening of The Woodsman 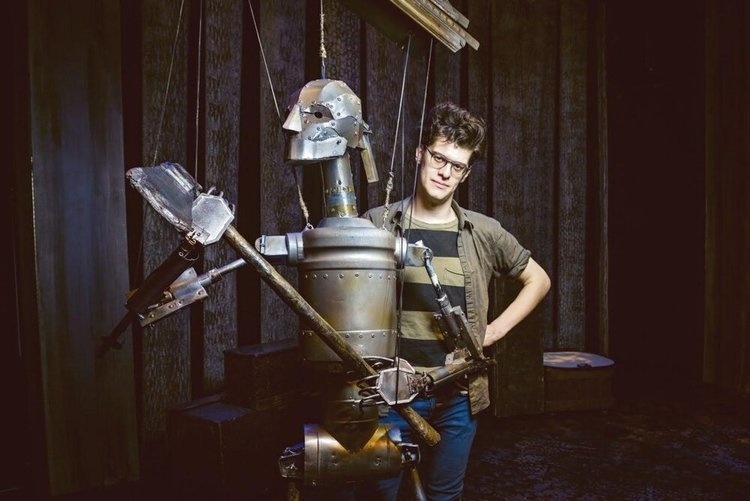 Like a farmhouse falling from the sky and crash-landing on a Wicked Witch, “The Woodsman,” a puppet-based stage adaptation of the Oz-ian origin story of the Tin Man, touched down at Colgate’s Brehmer Theater this past Wednesday, Sept. 22. The Colgate Theater Department welcomed award-winning playwright, designer and director James Ortiz to present a screening of the play as part of the Stagecraft and Design Appreciation Series.

The off-Broadway hit showed audience members a new twist on the classic Wizard of Oz tale. The story is a relatively straightforward one: in the Wicked Witch-controlled eastern corner of Oz, where everyone is too fearful to speak, a simple woodsman named Nick Chopper falls in love against all odds with a Munchkin maiden named Nimmie Amee. Unfortunately for the lovers, however, the Witch discovers their relationship and curses Nick’s own ax to chop off his limbs one by one each time he uses it. Desperate to build a home and a life for Nimmie and himself, Nick is unable to resist using the ax and is forced to begin replacing himself, piece by piece, with tin prosthetics until nothing, not even his heart, remains. Believing himself incapable of love without a heart, Nick retreats into the solitude of the forest and rusts away, his transformation into the Tin Man complete.

As a result of the Wicked Witch’s reign of terror over eastern Oz and her ban on speech, the majority of the play is told wordlessly by an ensemble of human actors and life-sized puppets communicating through every form of non-verbal expression imaginable from grunts and grumbles to pleasant humming and downright shrieking. Musical accompaniments by lone violinist Edward W. Hardy complemented the visual elements.

The audience at the theater was deeply engaged throughout the event, going pin-drop silent as the Wicked Witch took to the stage (or rather the air above) and roaring with applause when Nick defeated the Kalidah, a terrifying part-tiger-part-bear beast so large that it must be operated by three puppeteers at once.

First-year student and theater enthusiast, Laine Girolamo, was awestruck by the extreme care put into the operation of the puppets and specifically that of the Wicked Witch of the East.

“The way that the Wicked Witch hovered ominously throughout the show was extremely intriguing to me. Beneath her taffeta gown, the witch was actually without legs, but when the puppeteers sat her down, their feet became her feet. It takes immense creativity and teamwork […] to bring a puppet to life […] and knowing [this] only adds to ‘The Woodsman’s’ brilliance,” Girolamo said.

Another first-year student and experienced theater tech, Quinlan Owens, attended the showing in hopes of gaining inspiration for her own creative process and came away dazzled by one scene in particular.

“The fireflies scene […] was something of its own entirely. The warm lighting cast over the stage and the little drops of golden luminosity in their midst made it so beautiful to watch,” Owens said.

After presenting his work at Colgate and witnessing the excitement of students first-hand, James Ortiz, the mastermind behind “The Woodsman,” wished to offer up a bit of advice.

“If you want to work in [theater] or pursue an artistic passion then you owe it to yourself to go for it! It is deeply rewarding work,” Ortiz said.

“The Woodsman” is a wonderful mess of contradiction that will leave viewers feeling joy, sorrow, satisfaction, confusion and everything in between. Even though the story revolves around such fantastical elements as Munchkins, a mythical forest and an enchanted ax, the interactions between the characters are so remarkably human that one begins to feel as if they too are a part of Ortiz’s Ozian world. Praise for “The Woodsman,” and praise for James Ortiz!