Finding Family and Calm Through the Rock Wall 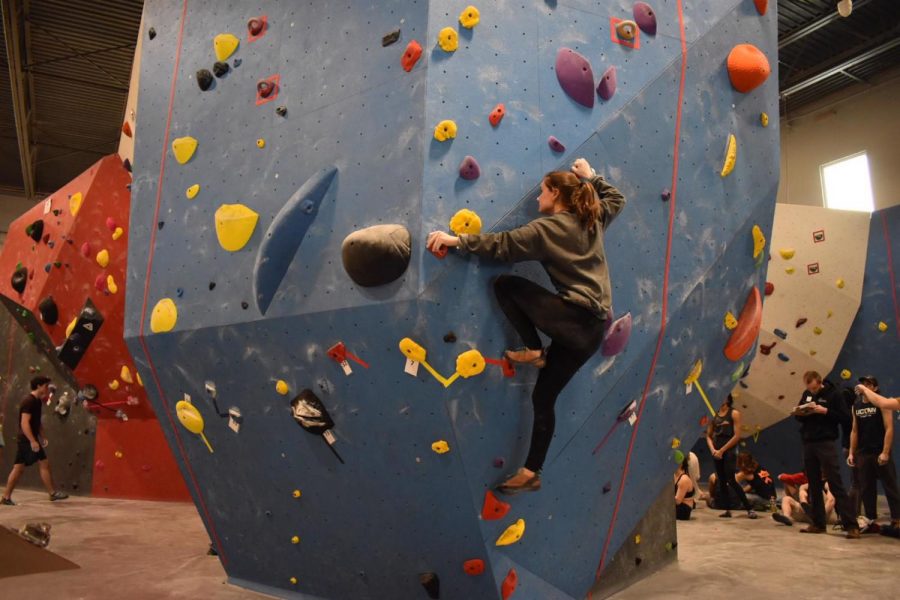 Milky Chance’s “Colorado” reverberates through the high-ceilinged room where students, strapped into tight-fitting velcro shoes, clamor up a large maroon wall implanted with a colorful array of plastic pieces. They eagerly reach for one another’s shoes, or more specifically, a carefully placed piece of tape on the back of them.

Their chalked hands clench the holds before them; their feet perform a delicate dance over the small holds underfoot. From the cushioned floor behind them, a cluster of students looks on. The group on the floor slowly grows as students slip from the wall or lose the tape on their shoe to a sneaky peer.

After over 10 minutes, two climbers remain — first-years James Manderlink and Porter Thomas. The students seated on the floor follow the pair’s every move, laughing and cheering as Manderlink and Thomas attempt to peel one another’s hands off the holds, pull one another off the wall or snatch the other’s taped shoe. After an intense battle, Manderlink slips from the wall, leaving Thomas the victor of the game. This climactic end is met with oohs, ahhs, fist-bumps and cheers.

This beautiful madness came at the end of the meeting of Colgate Climbing Club’s Friday, Sept. 24 practice on the Angert Family Climbing Wall. The club’s game of battle-royale-esque tag brought together good friends and perfect strangers of various experience levels, class years and backgrounds within the Colgate student body.

“I had so much fun with the people in my group,” first-year Nathalie Salvador shared after the game. “Everyone was incredibly nice. I was really happy to have everyone there supporting me.”

Salvador rock climbed for the first time during the club’s first meeting of the year on Aug. 27. Despite her inexperience, Salvador has felt wholly embraced by the club captains and members.

Junior Nick Mecca, one of the club’s three captains, notes that this supportive spirit is a hallmark of the climbing community at Colgate.

“Every time you’re doing a climb, you always have your friends watching you, supporting you, saying ‘oh, try moving your hand right, just push a little more, just a little more,’” Mecca shared. “I’m not sure what it is about climbing, but it brings people together in such a way that I haven’t seen with any other sport.”

The design of Angert Family Gym lends itself to people of many different skill levels and backgrounds. The three-paneled wall has many frequently changing climbs that support both experienced and inexperienced climbers. Alternatively, climbers can forge their own paths on the wall.

The club’s Monday and Wednesday practices, where the captains guide club members in basic skill-building and strengthening activities, also cater to a large spectrum of climbers. Friday games, too, are exciting for even the newest climber. Additionally, the gym’s daily “open hours” allow for more freedom.

“I really like how balanced the club is in terms of the things that we do. I feel like if you went to all of [the practices], you could really improve quickly,” sophomore Shafi Islam shared. “My favorite part of the club is the competitions or games — it gives me a lot of drive and channels my competitiveness — I like how I get to explore that here.”

Islam came to Colgate’s climbing club after a few years of climbing a few times a month. He aims to build upon this experience over the next few months.

Other members of the climbing community carry a different motivation for their participation in the club.

“Being a climber is a really fun thing to brag about,” Salvador shared, chuckling. “It’s is so cool that I get to say, ‘Yep, I’m good at climbing.’”

Near Salvador’s coastal Mississippi hometown, there is no climbing gym, but this is not the only reason Salvador has joined the club.

“It’s a big thing to do something you didn’t think you could do. I’ve already had that experience with a few climbs and I hope to have more.”

For heads of the club, climbing, and being a part of Colgate’s climbing community, means something profound.

Club Captain and junior Teagan Krane met her core friend group through the climbing club. She and her peers joined as first-years, forming bonds that quickly extended outside the gym’s walls, shaping her into the person she is today. The gym also has a therapeutic effect on Krane.

“Just being in the rock climbing space, in the wall, can be really helpful in terms of getting my mind off stress. It’s really nice to have a couple hours a week where I can just come here and focus on something unrelated to academics.”

The wall and the club have a similar effect on Mecca’s wellbeing.

“You really can only focus on your body and the movements you’re doing while you’re up on the wall. It’s a great way to clear my head — just be in the moment.”

When he arrived at Colgate, Mecca struggled to find a community or close group of friends. However, in pursuing the activity he loved, climbing, he found his family. Climbing has shaped Mecca’s confidence, perception of self and outlook on the world that surrounds him.

This year, as captains, Mecca, Krane and junior Will Krohn hope to continue strengthening this sense of community and family they first felt when they joined the climbing club as first years.

“I want this to be a space where everyone feels included,” Krane said. “That’s how the seniors made us feel our first year.”

Beyond practice on the wall, the climbing club has already held one university-wide contest and had a club day called “Flannel Friday,” a resurrection of a tradition of the seniors from two years ago. This year’s captains are considering taking the club to a wall off-campus or outdoors.

More than doing any particular activity, Mecca explained, these leaders want to share the magic of climbing with Colgate students.

“I really want to show them how fun it is, being up on the wall and so in control of your own body,” Mecca shared. “It feels like you’re flying when you’re on the wall, almost.”

In the gym of the Angert Family Climbing Wall, an almost undetectable dusting of palm chalk lingers in the air. The floor sinks when you step on it. On your left, when you enter, there is a black counter where you can borrow shoes and sign in for the day. More importantly there is an unfailing atmosphere of camaraderie, friendship and enthusiasm in the room.

“Colgate can seem very exclusionary in some aspects … but I feel like the climbing wall is just a place where everyone can come together. Everyone’s just so excited to be there. Everyone’s just happy.”