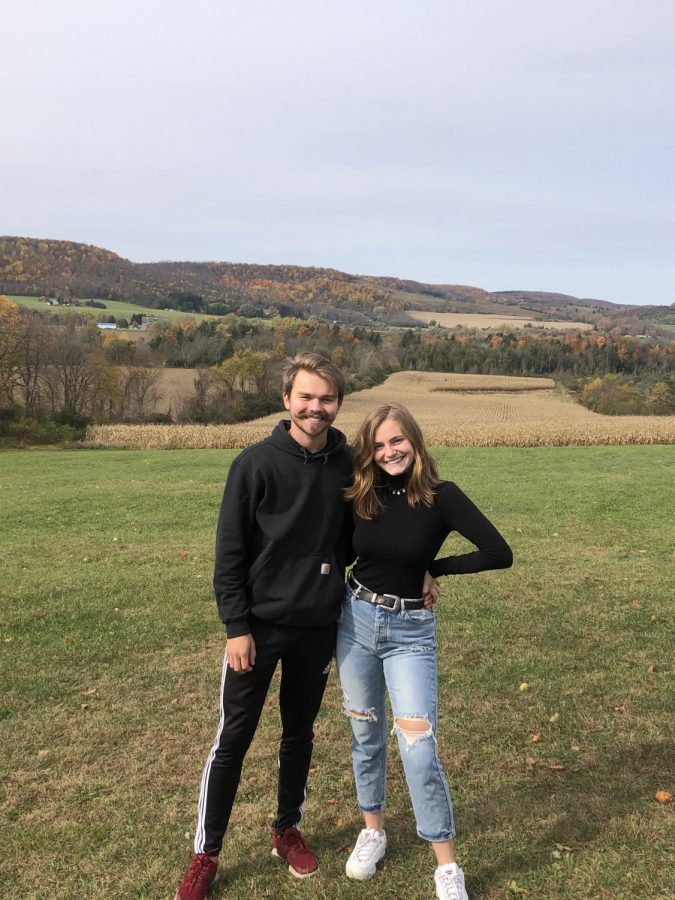 Printed with permission of Fred LeClair and Emma Routh

Seniors Fred LeClair and Emma Routh’s story began with a series of chance encounters, their first being during their first-year orientation week, outside of Donovan’s Pub.

“She’s across from me and she’s sitting there on her phone, not really engaged, whereas everyone else was like ‘I want to make friends. I want to see what’s going on,’” LeClair reminisced. “And I thought ‘I can’t believe this person right now!’ and automatically I just didn’t like her. And that was the first time I saw her but we hadn’t really ‘met’ at that point … But I knew her name.”

Later in the week, on a trip to a professor’s office hours, the two found each other again in the Persson Hall skybridge, home to their first real conversation, which they both remember fondly. A few more random run-ins in West Hall, where they both lived, prompted the two to constantly be in each other’s company, despite how early it was in their first year.

“We couldn’t really stay away from each other,” LeClair said. “So eventually we [decided], ‘Alright screw this. Let’s just do our thing and see what happens.’”

The two have been together ever since. The height of the COVID-19 pandemic, particularly the spring and summer of 2020 when Colgate students were sent home, fortunately presented no challenge to the two but rather inspired different ways to connect virtually, including a version of Netflix party. With LeClair living in Denver and Routh living in Cleveland, the two were fearful of traveling and only visited each other once briefly, but for them that was enough.

During their junior year, both decided to return to campus, finding a variety of ways to spend more time with each other, including running together during outdoor time, playing pick-up soccer with the friends they’ve had since their first year and taking long walks outdoors. Now, in their senior year, the two are very grateful to have a sense of normalcy.

“Obviously there’s a lot more freedom,” LeClair said. “We have the choice to either go on a run or walk or we can sit in bed and watch TV. We have options.”

“It’s been nice to explore the surrounding area a lot more because, I’ll admit it, freshman and sophomore year we kind of neglected that a lot,” Routh added. “We were very focused on each other, school or our freshman dorm room pre games. That’s all that was really going on in my head at that time. So exploring Quack’s [Diner], for example, I had never been there and it was so cool to go there.”

For them, being a couple at Colgate can feel strange because of the prevalence of hook-up culture. However, they appreciate Colgate’s small size in navigating social settings together and helping them build trust, given how overwhelming and isolating Colgate can feel at times.

When asked for advice on dating at Colgate, the two agreed it’s different depending on what year you’re in. At first they were worried they were moving too quickly their first year, which often does not work out for a lot of folks, but both realized how fun dating can be in spite of the risk.

“Dating while you’re in college really aids in development in a lot of ways because everyday you’re going through struggles whether it’s with classes or friends,” LeClair remarked. “Learning to communicate with another person through those issues but also through all the good things that happened and being able to celebrate with them, I know it’s helped me grow as a person.”

The two recalled one of their first dates: stargazing and a late-night picnic on the ski hill in October counting shooting stars until they got too tired. They hope to do that again this year, coming full circle.