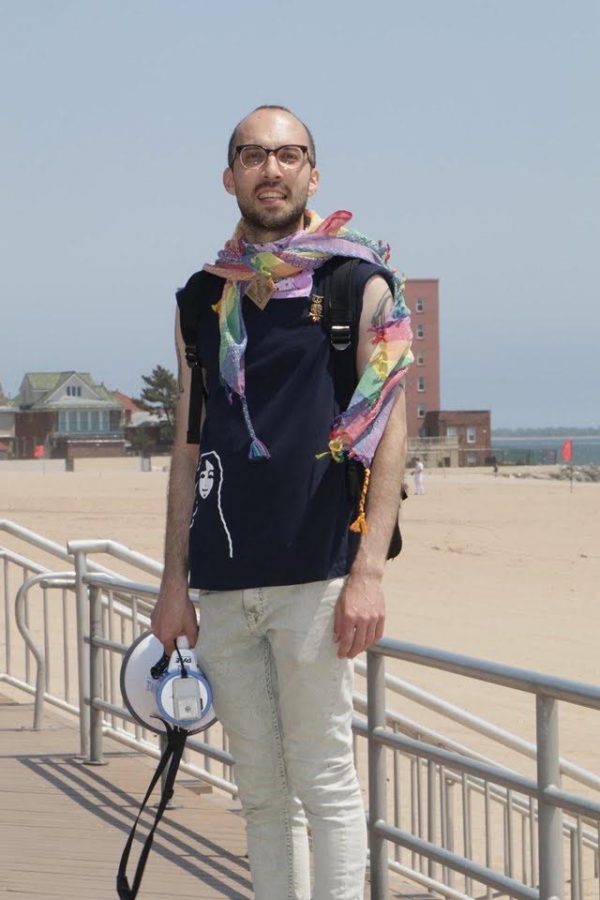 Printed with permission of Lyosha Gorshkov

Lyosha Gorshkov, the new Director of the Office of LGBTQ+ Initiatives, has had a long journey to get to Colgate University. Gorshkov began an academic career focused on queer studies in Russia and studied and taught there for many years before a change in policy uprooted Gorshkov’s life there.

“I had been teaching at one of the universities in Russia, and I was promoting queer studies for many many years, and I’ve always been [an] openly queer professor, and eventually I became Deputy Dean. But in that time, they actually introduced the propaganda law, propaganda of non-traditional values, which include LGBTQ+ and all people who were publicly promoting something not aligning with the traditional values as the gold standard being persecuted. So I was basically purged and exiled to the United States in 2014.”

Upon arriving in the U.S., Gorshkov was inspired to become involved in social justice and advocacy movements both because of Gorshkov’s background in LGBTQ+ studies and the difficulties Gorshkov witnessed in the U.S. — building a life in the U.S. was not easy.

“Here I [started from] scratch, because apparently [the] United States is not the best place to go to start [a] career, unless you have stamina and patience because it’s [a] very difficult journey, which led me to the public advocacy and social justice movement.”

Living in New York City, Gorshkov became a leader in an organization called the Russian-Speaking American LGBTQ+ Association (RUSA LGBT). Gorshkov’s advocacy for the LGBTQ+ community, and the immigrant LGBTQ+ community in particular, is what caught the attention of major universities and sparked a new career in American academia, first at Indiana University, then Slippery Rock University and finally here at Colgate.

Gorshkov filled the Director of LGBTQ+ Initiatives position on Aug. 9, but already has big plans for the campus and beyond, with a focus on revitalizing the LGBTQ+ community on campus and making Colgate and the surrounding community a safe place for all kinds of love. Gorshkov describes the first month of the new position as “intense” — upon assuming the role as Director, Gorshkov had to gain the trust of coworkers, communicate with students and plan programming all while trying to reinvigorate the Office of LGBTQ+ Initiatives.

“In my opinion, the LGBTQ+ initiatives office has been a little bit pushed aside, and hidden into the some kind of mainstream of routine, and not being much visible and proactive for the student community.”

An important facet of Gorshkov’s approach to inclusivity at Colgate is a focus on international students and their experiences.

“What is very important for me is to have the representation of international students, which is a great number here, right, so people come, and when people come from different backgrounds and walks of life, different countries with different narratives of LGBTQ+, and maybe with their own preconceptions, we have that unique opportunity to exchange the experiences, to learn from them and they can learn from us.”

In an effort to support LGBTQ+ students on campus, Gorshkov is spearheading the “Queering Belonging” initiative. Using this as the theme of queer history month in October, Gorshkov hopes to accommodate all students regardless of their identities. In addition to social and cultural programming, the Office of LGBTQ+ Initiatives will be offering training sessions on topics like creating safe zones or the proper use of pronouns in order to help promote allyship and understanding.

“We’re trying to produce that knowledge [of] how to be a better LGBTQ+ ally in challenging times like COVID-19, or political unrest, or social injustice, especially with anti-trans bills, anti-abortion bills, and how to build those allyships across the campus. … So we’re trying to test the water and apply the knowledge and promote that notion of inclusivity and intersectionality.”

Gorshkov is also planning on opening up the Rainbow Room, a location in the Bryan Complex which has served as a secretive meeting place for LGBTQ+ students on campus for many years — Gorshkov describes it as “sort of like the chamber of secrets on campus.” Gorshkov wants the LGBTQ+ community on campus to be more visible, and under Gorshkov’s leadership the Office of LGBTQ+ Initiatives is planning on holding programming in this space while maintaining a separate room as a confidential space should students feel the need for such an environment.

It’s unclear as to whether the Rainbow Room became a secret out of students’ desire for a private meeting space or out of necessity due to an unaccepting campus. Whatever the origins of the space, Gorshkov believes that keeping the LGBTQ+ community hidden will do more harm than good and that the Rainbow Room is an excellent location to host LGBTQ+ initiatives.

“What I know for sure is the students, current students who identify as LGBTQ+, never wanted this Rainbow Room being secretive, they wanted that room being the home, being the place for gathering and hanging out, but not to be pushed on the margins and to be hidden from the eyes of the public.”

One of the events Gorshkov is most excited for is the “Sex Museum: The Price of Pleasure” exhibition being held in the Hall of Presidents on Sept. 29 at 5pm.

Gorshkov is also currently trying to reimagine “the Closet,” previously a place for trans and non-binary students to try on gender-affirming clothes for free. Gorshkov wants to see the Closet morph into a lesson on body positivity, where students can go regardless of their gender identity to try on whatever clothes they want.

“We’re trying to do not only the clothes in the room, but also … to bring it as a platform for workshops and master classes especially for gender non-binary trans folks, in terms of how to develop your image, how to recreate the image and how to be comfortable with that.”

Gorshkov wants all students to benefit from programming in the Rainbow Room.

“I keep saying, even if you’re a straight, cisgender man, but always wanted to put the high heels on, the Closet should be for you, you can come to Rainbow Room, it’s going to be sacred, safe space for you, nobody will judge you. …  So that’s the place to be free, and to be liberated, with your body.”

But Gorshkov isn’t only concerned with inclusivity on the Colgate campus — the university’s unique location presents a challenge, but also an important opportunity.

“Colgate has a unique opportunity to become the hub for LGBTQ+ people in Central New York, in New York State, because it has resources, it has intention to change — this third century plan, right — so we have that amazing staff, an amazing diverse faculty, an amazing diverse student body, which [is] now becoming more visible on campus. … Colgate kind of plants the seeds of diversity, within the county and educates the county, and changes the county framework.”

Gorshkov hopes to plan trips outside of the Colgate and Hamilton area and do programming in more conservative parts of the state and country to make sure that Colgate spreads its core values wherever it goes. Gorshkov acknowledges that Colgate as an institution is not and has never been perfect, but believes that it is committed to change and can benefit its students as well as surrounding communities.

“We need to acknowledge that we still have certain dark spots on the history and the present, and we need to be more proactive in terms of working with administration with the students who have different historically, more conservative departments, let’s say, or stakeholders here, but I believe that Colgate is moving in the right direction. So it’s up to us how we keep up, and how we help to navigate that ship, but I have high hopes. … I see that I can do a lot of things and I can contribute to that change, and that makes me happy and makes me, you know, my work much, much more valuable and valid.”