Caroline Osman and Luke Beckmen: From Luck to Love 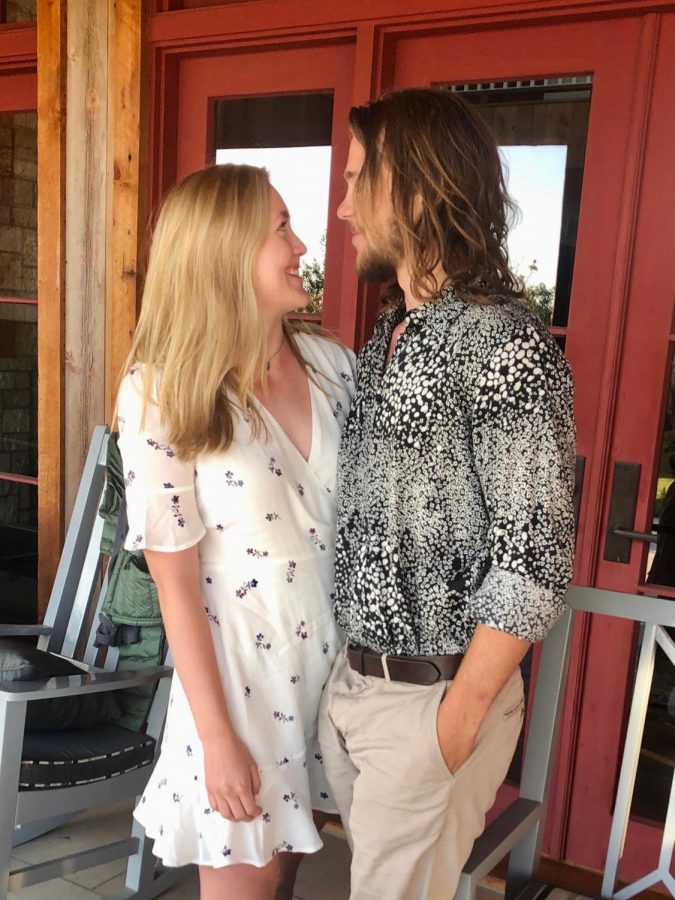 Printed with permission of Caroline Osman and Luke Beckmen

West Hall is quintessential Colgate — positioned atop the hill with some of the best views of the Chapel, it’s no surprise that prospective student tours stop in to see a sample double bedroom dorm in the building. It’s only fitting, too, that seniors Caroline Osman and Luke Beckmen’s Colgate love story began there their first year, even though no words were exchanged.

“I remember seeing [Osman] in a common room of West [during our first year] and thinking [she was] really cute, but we didn’t really speak. I had a lot of friends in West and [she] would always kind of be there. Some of my folks would be in the common room and she’d be there studying or what have you. We just didn’t talk to each other because we hadn’t met officially. It was one of those awkward situations,” Beckmen recalled.

At the very beginning of their sophomore year, they put the awkwardness behind them when the two found themselves together in a Pinchin Hall suite due to an overlap in friend groups.

“He made a beeline for me and said ‘I think we’ve met,’” Osman recalled, although they never really had.

After talking for a while that night, their relationship continued to develop through conveniently timed walks throughout campus. Beckmen had a class in Lathrop Hall, Osman had a class in Ho Science Center and they both had a class in Persson Hall afterward. Osman admittedly ran from Ho just to catch up to Beckmen at Lathrop.

At some point throughout that semester of walks, the two began officially dating, but it’s not clear exactly when. They celebrate an anniversary in September, but there was never an acknowledgment of this back then.

“There was never a specific time where we were like ‘Okay, we’re dating now, you’re my girlfriend.’ It was more of a ‘I like being around you,’” Beckmen said.

It was Osman, however, who accidentally called Beckmen her boyfriend in December 2019. Osman remembers Beckmen said, “Oh, am I?” and she said, “Yeah!”

The couple couldn’t enjoy their newfound title for all too long that next semester, however, given the unanticipated challenge of a remote spring due to COVID-19. While most students spent the last in-person week on campus in a nearly celebratory fashion, Osman and Beckmen harbored some different feelings.

“We had been dating each other for six months, so it wasn’t necessarily a fresh relationship, I feel like we loved each other at that point […] It was very hard saying goodbye to [Osman] at that airport terminal. That was the saddest, most stressed out I’ve ever been,” Beckmen said.

Osman, who is from Radnor, Penn., flew out to Beckmen’s home in Buellton, Calif. that June, where they enjoyed hiking, going to the beach and playing with Beckmen’s family’s new puppy.

“[Osman] visiting was 100 percent the highlight of my year,” Beckmen said.

While a return to in-person classes in the fall of 2020 marked a reunification for most Colgate couples, Beckmen opted to study remotely for the year, extending an already unanticipated long-distance period.

“Long-distance has been something I’ve tried to actively avoid, just because I can’t show my affection in that way. Both of our love languages are physical touch. It’s just nice to hold hands and be around each other,” Beckmen said.

Even while out of their element, they made it work, with major thanks to Netflix parties, “Rick and Morty” and “RuPaul’s Drag Race.”

“When I called [Beckmen] [during that period], I would get off the phone and it improved my mood every single time,” Osman said.

In what’s shaping up to be a relatively “normal” senior year on campus, the two now get to enjoy each other’s in-person company and continue their tradition of Osman getting either Flour and Salt or Rye Berry items and taking them back to Beckmen’s kitchen in the Loj where he supplements them with eggs.

Quick to call each other “nerds,” they also connect over “deep talks.” Osman said that, “One of the first things [we] connected over was [Professor Jeffrey] Spires’ Legacies class. [We] disagreed about the meaning of the course, and things like that aren’t uncommon in [our] relationship.”

On a more emotional level, Osman loves that she can be “fully [herself]” around Beckmen, and doesn’t have to think about what she says too much. “Every time with [Beckmen] is a good time,” she continued.

Beckmen loves that they’re both “Kind to the people around [them] and to each other.” He loves to be goofy with Osman and says that “feeling the lack of judgement from [her] is really lovely as well.”

Both are pursuing political science degrees, with Osman double-concentrating in biology. On top of that, Osman is a member of the varsity Swimming and Diving team and Beckmen is a part of Outdoor Education staff. One may wonder how they’ve nurtured a two-year and counting relationship while balancing these commitments.

“Something else that I love about [Osman] and love about us, is that we really accept each other and what the other person is going through or has to do, so it’s alright to postpone things,” Beckmen said. Osman then summed it up well: “It’s all just about communicating.”

With communication, anything really is possible, including being apart for nearly half of their relationship.

It may be a rarity to be in a relationship amongst a campus notorious for its hook-up culture. They both shared what it’s like to be an outlier.

“Hook-up culture can be really transactional. I don’t feel like we view our relationship like that, it’s more trying to make the other person happy, rather than trying to get something for yourself,” Beckmen said.

“We had such an immediate connection that it feels like we couldn’t have ended up any other way,” Osman said.