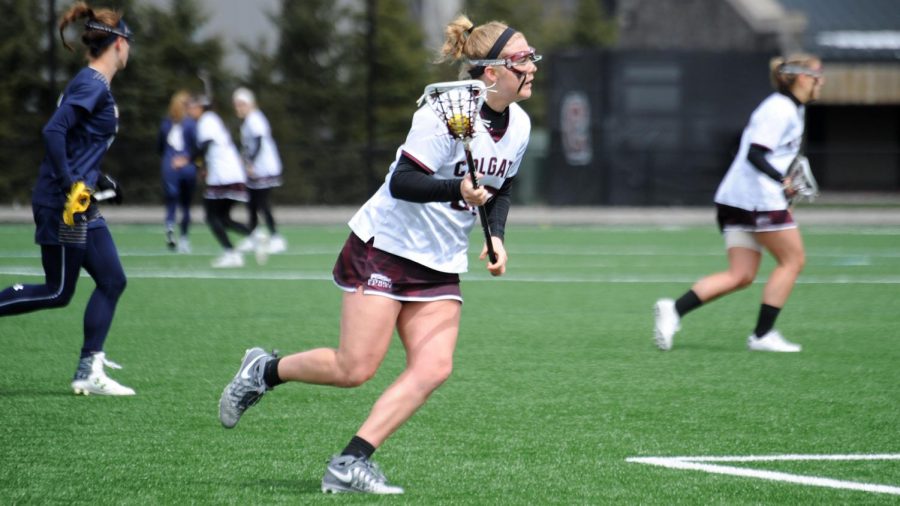 First-year attack Payton Gabriel scored the first goal for the Raiders during the first half of the game against Army; despite the goal from Gabriel and goals from several others, the Raiders were unable to pull out a win.

This week served as one of loss and redemption for the Colgate women’s lacrosse team. Wednesday, April 19, the Army West Point Black Knights travelled to Hamilton, NY in what resulted in an upsetting loss at home for the Raiders. With a final score of 9-11, the Raiders certainly competed, but failed to overtake the Black Knights.

Although the loss was dissapointing, several players had impressive performances, notably senior attack Isabel Kreitler and junior midfielder Haley O’Hanlon, who both tallied hat tricks. Kreitler’s hat trick marked her eighth total and fourth consecutive hat trick of the season, while it marked O’Hanlon’s fifth overall. Sophomore goalie Asil Asfour also put forth one of her best performances to date, tying her career high of 10 saves.

The Black Knights entered the game strong, racking up four goals midway through the first half of the game, while the Raiders countered with only one goal scored by first-year attack Payton Gabriel. Maintaining their momentum, the Black Knights continued to play offensively, scoring an additional two goals.

With the Raiders lagging behind, sophomore midfielder Charlotte Redican scored a goal to help make up for the deficit, while O’Hanlon netted two back-to-back goals to help further close the gap between the Raiders and Black Knights, which brought the halftime score to 4-6.

Ultimately, the Raiders could not overtake West Point, losing 9-11. The loss was particularly upsetting for the team, as it took the Raiders out of Patriot League playoff contention.

On Saturday, April 22, the Raiders defeated the Lehigh Mountain Hawks in their second-to-last game of the season, which concluded with a final score of 13-8. This victory was undoubtedly bittersweet, occurring just days after losing Patriot League contention.

Asfour played her best game of the season, making a career high 13 saves in goal. This game marks Asfour’s third game during which she made at least 10 saves, showing a great deal of improvement from past performances and future promise. O’Hanlon also played an incredible game, tying career-highs in ground balls, caused turnovers and draw controls.

Kreitler again proved what a powerhouse she is on the field, scoring four goals,her ninth total and fifth consecutive hat trick,against Lehigh. She also hit another major milestone during the contest, snagging the 100th goal of her collegiate career. This impressive feat served as an incredible benchmark for Kreitler to achieve before wrapping up her senior year.

“Reaching my 100 goal mark was a really exciting moment in my athletic career. I couldn’t have achieved it without the help of my teammates. Everyday they make me better in practice and force me to push myself out of my comfort zone. I owe the realization of this goal to them and their commitment to our lacrosse program.”

At the weekend’s conclusion, the team’s overall record stood at 5-9, while they moved to 2-6 in Patriot League play.

The Raiders will play their last game of the season this Saturday, April 29 against Holy Cross at home on Beyer-Small ’76 field, where they hope to continue their swim upstream towards success.