The Development of a Leader: Ruby Diodati’s Soccer Journey 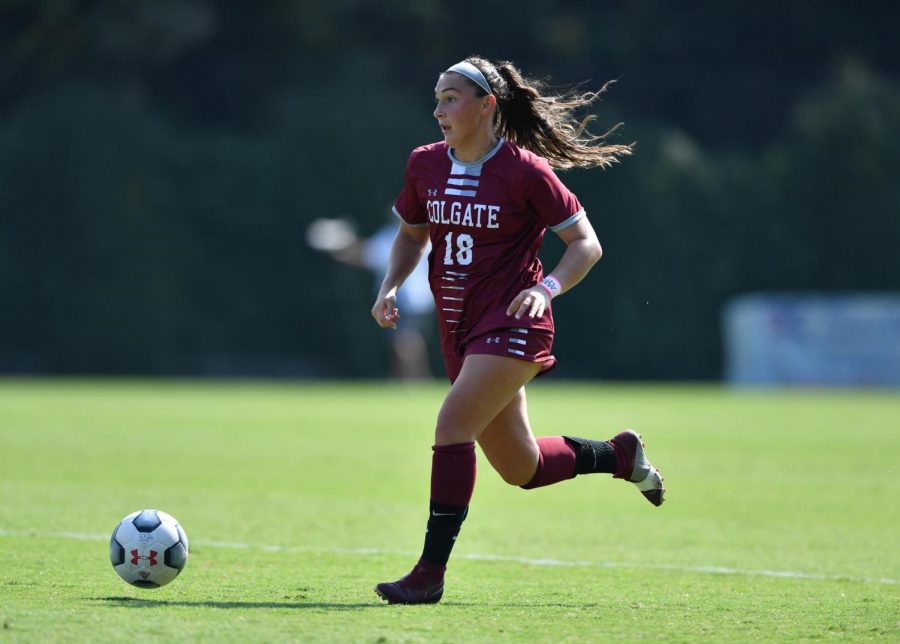 On Sept. 28, Diodati was named to Top Drawer Soccer’s Team of the Week after leading the Raiders in a pair of wins over Boston University and Bucknell University that month. This is one of many honors Diodati has received throughout her collegiate career, including the All-Patriot League Second Team, Patriot League Defensive Player of the Week and Patriot League All-Tournament Team.

“These are shared awards and shared accomplishments,” Diodati explained. “They can almost all be accredited to the work of my teammates and how they continue to push me and make me better.”

This is Diodati’s second year as captain of the women’s team. However, soccer has been a fundamental part of Diodati’s life since her early childhood. A love for competition drew Diodati to the sport.

While she has many fond memories of kicking a ball around in the park with her older sister and dad, she also watched competitive, talented and driven female players excel in the sport in her hometown of Mendon, Mass.

“When I was little, I saw a lot of women going to the national team. I got to see that there were many options, from college, to professional, to national teams for players. The fact that there were so many places to go with soccer definitely kept me attracted to the sport.”

Diodati was not only motivated by the players around her, but by the women she saw on the big screen playing the sport.

“I grew up watching the women’s national team. I loved following all of the players. I think that especially in the U.S., seeing how much support the women’s team gets really encouraged me as a player. It has been so refreshing to see women’s soccer get the same sort of viewership as men’s.”

Diodati applies many of the lessons she learned from the players who surrounded her early in her life into her leadership role today.

“She is a very humble person but very intense in terms of her competitive nature,” Hokanson shared. “The coupling of those two things is pretty hard to find.”

As a captain, Diodati commands the respect of athletes and coaches alike.

“She has ushered our team through a transition with a new staff and a young team. It’s pretty evident the degree of respect her teammates have for her,” Hokanson said.

Diodati elicited a similar response from coaches when she spoke at Colgate’s welcome back event for athletes in the fall.

“I remember other coaches coming up to me and saying, ‘Man, she’s an impressive person.’ She’s a prominent voice for us. We rely on her as a staff to pass on messages, themes…,” Hokanson said.

“When [Diodati] and I first met, she was this super shy kid. Now she’s evolved into our fearless leader. Everyone looks up to her.”

The pair began playing soccer together at age 12 when they both joined a Massachusetts club team. Though they did not coordinate their commitment to Colgate, they were excited when this choice aligned.

“We definitely connect on and off the field. [Diodati] and I work really well together, and we’re able to find each other on the field too,” Pinkus explained. “It’s a really great relationship that we have — as people, friends, roommates, teammates and soccer players.”

Pinkus and Diodati, offensive and defensive players respectively, invariably rely on one another on the field. Pinkus has scored five goals this season — four of them assisted by Diodati, most recently in a victory against Boston University on Sept. 22.

“I think that the fact that we’ve played together for so long and been teammates for so long has allowed us to build this chemistry together on the field and off,” Pinkus shared. “[Diodati] is an amazing defender. She understands the game of soccer really well. I feel like I can always count on her on the field.”

Hokanson explained that it is difficult to balance friendship with leadership as a captain. One of her first conversations with Diodati was as the young woman was coming off a leadership event held by the Naval Academy. Hokanson and Diodati discussed how leading can complicate relationships on the team.

However, Diodati seems to strike this balance.

“[Diodati] makes her teammates feel simultaneously heard, seen and held accountable,” Hokanson explained. “[Diodati] is conscious of what it means to leave a legacy. I think that’s part of the beauty of the way she’s led. In her absence, she’s finding ways to empower others to fill the void when she’s gone.”

Diodati looks towards her last season on the Colgate women’s soccer team with hope and excitement. To the captain, her team, which currently has a 6-4-2 record, is taking the season in stride.