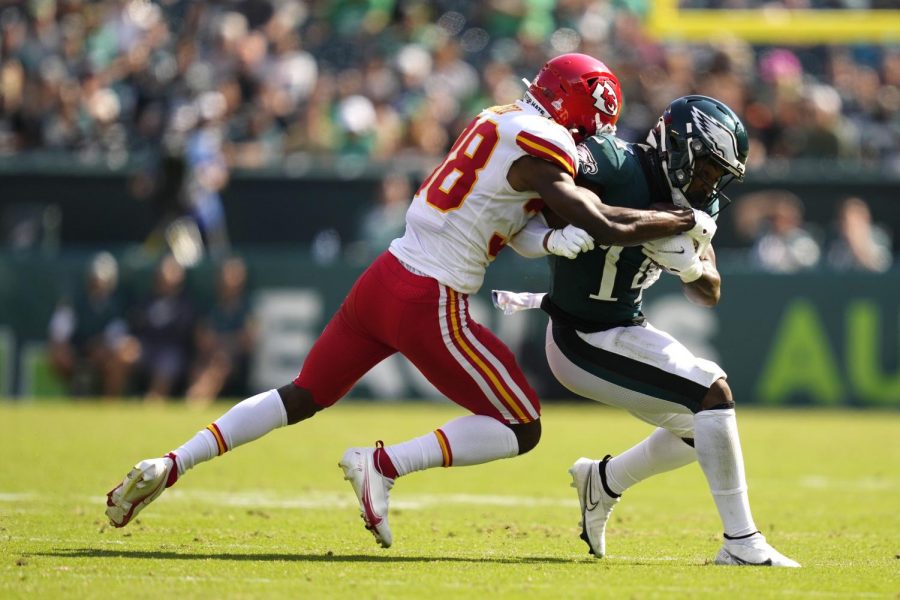 I will always remember Week 4 of the 2021 NFL season as the week when Zach Wilson of my beloved (and beleaguered) New York Jets became a legit NFL quarterback. After a rocky first half in which he threw his league-leading eighth pick (not his fault — intended receiver Corey Davis slipped), he came alive in the second half with two touchdown throws, the second one a beautiful 53-yard throw on the run to Davis in the end zone. More incredibly, the Jets won the game in an overtime shocker over Tennessee. The New York Giants also pulled away in OT over New Orleans off of one of quarterback Daniel Jones’ best performances of his career. Wins by the two lowly NYC-area football teams on the same Sunday reportedly caused much of the city to come to a complete standstill. North of the city, the big news was the return of Tom Brady to Foxboro wearing the enemy colors of the Bucs (tight end Rob Gronkowski was ruled out for the homecoming game with broken ribs and a punctured lung). That game certainly wasn’t TB12’s best, but the Bucs were able to squeak out the win following a missed 56-yard field goal by Nick Folk that doinked off the upright. Week 4 also featured Trey Lance replacing Jimmy Garoppolo (calf injury) for the Niners at the start of the second half and promptly throwing a 76-yard TD to a WIDE-open Deebo Samuel, one of two for Lance on the day, as well as an absolutely dominant Bills 40-0 shutout win over the Texans. And we also saw a continuation of the trend of long returns, this one a 101-yard kick return by Washington’s DeAndre Carter.

Week 4 was another lost one for me in my pool, however.

I had the Falcons getting 1.5 points at home in the “A” against the Football Team (FT) from D.C. I had fun watching Matt Ryan (four TD passes) pick apart the supposedly fearsome Washington defense (the TV commentator mentioned that the FT defense is actually bottom five in the league so far). Unfortunately, FT quarterback Taylor Heinicke did his best Matt Ryan impression and held the game tight going into the fourth quarter. When the Falcons went up 30-22 early in the fourth, I took my celebratory soda out of the fridge and put it on ice. But wait. With under four minutes left in the game, Heinicke did his best Kyler Murray impersonation as he scrambled away from a sack and lobbed a Hail Mary-like pass into the end zone that Terry McLaurin, doing his best DeAndre Hopkins impersonation, somehow managed to come down with for six. After a missed two-point conversion to tie, I was still up by three-and-a-half and not too worried as Ryan had the Birds on the move. But he couldn’t put the game away, and the FT got ball back with less than two minutes to play. I was chewing on my fingernails now. And then — what?! Heinicke checked down to J.D. McKissic, who ripped down the sideline and hurdled into the end zone for another six. Another failed two-pointer gave the ball back to Ryan with a chance to cover the spread (oh, and win the game) with a six of his own. Ryan found Calvin Ridley, then scrambled into FT territory. There was still time for the Hail Mary of all Hail Marys. It went up and it was … was… was… batted down in the end zone. I put my soda back in the fridge…

I had the Eagles getting seven at home against the Kansas City Chiefs. I was down by five, 28-16, early in the fourth. Then Kenneth Gainwell lived up to his name by scoring on a seven-yard run, putting me up by two with about 12 minutes to go. I should have known it wouldn’t last. Patrick Mahomes, back on track with five TD passes, sliced up the Eagles’ D again and the Chiefs were grinding it out on the ground as well, including a big scramble by Mahomes. Finally, with a little over 6 minutes left to play, Mahomes drove a stake through my heart with a laser beam TD to Tyreek Hill (who had a monstrous 186 yard, 3 TD game) to put the Chiefs up 35-23 (and to put me down by five), en route to a 42-23 win at the Linc.

Maybe next week will be my week.