Around the Hill: What Do You Expect from the Rangers vs. Senators Series? 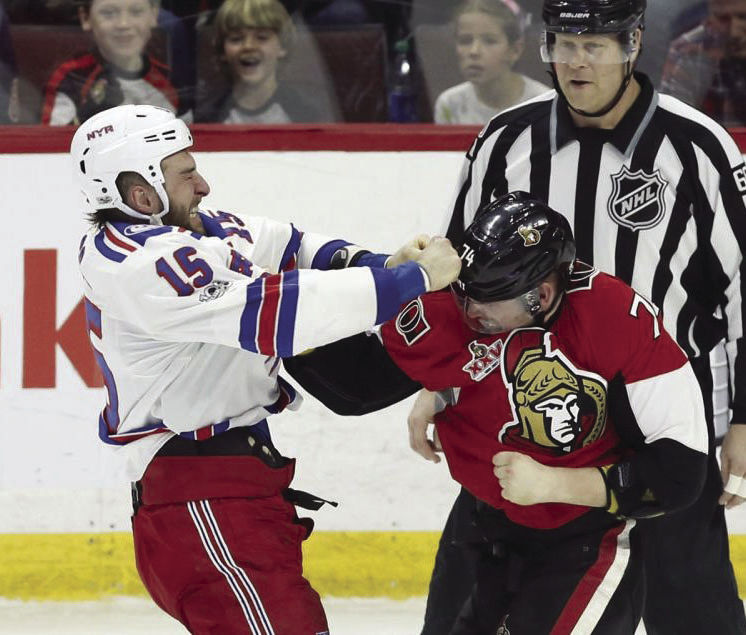 Playoff hockey elevates competition to new levels. The Rangers will take on the Senators in round two.

Rest can sometimes be deadly in the postseason and both the New York Rangers and Ottawa Senators will have plenty of it heading into their Eastern Conference Semifinal showdown.

The Senators reached the second round by defeating the Boston Bruins in six games, capturing three of the four wins in overtime. This shows that the Senators are able to win close games. Defensemen Erik Karlsson has anchored the Sens’ blue line all year long, averaging over 30 minutes on ice per game and has tallied six assists in the first six games. The Rangers need to find ways to get their stars on the ice when Karlsson is resting, otherwise they will have a tough time scoring.

Goaltending match ups are always talked about before a series, and Henrik Lundqvist has the statistical upper hand on Craig Anderson for the postseason. Lundqvist posted a .947 save percentage and 1.70 goals against average in the first round against the Canadiens, while Anderson was at a .921 save percentage and a 1.94 goals against average against the Bruins. Anderson however, in the two times he has played the Rangers this season, has two wins against the Blueshirts. This prior success very well may translate to confidence for the veteran net-minder.

I see this series going well for the Senators. Former Ranger Derick Brassard will continue his postseason tear, Kyle Turris will start to light the lamp and Karlsson and Co. will continue to keep things steady in front of Anderson: Sens in 6.

The New York Rangers and Ottawa Senators will face each other in the Stanley Cup Playoffs for the first time since the Rangers ousted the Senators 4-3 in the first round of the 2011-2012 playoffs. In the 2012 series, impressive goaltending from both Henrik Lundqvist and Craig Anderson kept the series fairly even, pushing it to seven games. Lundqvist and Anderson will  face each other again in another series where goaltending will be key. Both goaltenders have posted impressive numbers thus far through the first round, Lundqvist having a slight advantage with a .947 save percentage compared to Anderson’s .921. Expect both goalies to continue to post impressive numbers, as this could be one of the last possible years for both veterans to have a legitimate shot at the Cup.

If both teams get the production they expect from their goalies, this series is sure to be a close one and will probably go to at least six games. The Rangers have a slight edge in regular season points, with 102 compared to Ottawa’s 98. However, Ottawa did take the regular season series against the Rangers with two wins in three matchups.

With both teams appearing to be pretty evenly matched, home ice advantage will be a significant factor in the series. Ottawa has home ice advantage as the Atlantic Division’s second seed. Should the series go to seven games, the Rangers will not be playing at Madison Square Garden, where they are known to dominate in playoff game sevens.

If the Rangers want to win the series, they are going to have to play well on the road. Expect the Rangers to win a game in Ottawa and to dominate at MSG, winning the series in six games at home.

With the Ottawa Senators beating the Boston Bruins this past Sunday, the NHL’s second round playoff matchup with the New York Rangers is all set. The Rangers defeated the Canadiens on Saturday, winning the series 4-2. The Rangers have been a dangerous playoff team for the past five seasons, making it to the Stanley Cup Finals in 2014. Despite their recent success, the Rangers have not been able to win the Cup since Mark Messier delivered their last one in 1994. Ottawa on the other hand has had even less playoff success recently. This series victory marks the first-time Ottawa has left the first

The Senators are led by star defenseman Erik Karlsson, who is one of the best

defensive scorers in the entire NHL. I think this series will be decided by whether the Rangers can stop Karlsson. The Boston Bruins were unable to do so, a large reason for why they lost. Ultimately, I think the Rangers’ playoff experience will allow them to beat the Senators. Led by superstar goalie Henrik Lundqvist, scorers Rick Nash and Mats Zuccarello, defenseman Ryan McDonagh and Marc Staal, they are poised to make it to the Eastern Conference Finals this year. Whether the Rangers have enough talent to win the Cup this year is open to conjecture. Both the Washington Capitals and Pittsburg Penguins are the favorites to come out of the East this year. Ottawa will give the Rangers a run for their money, but I think this series will