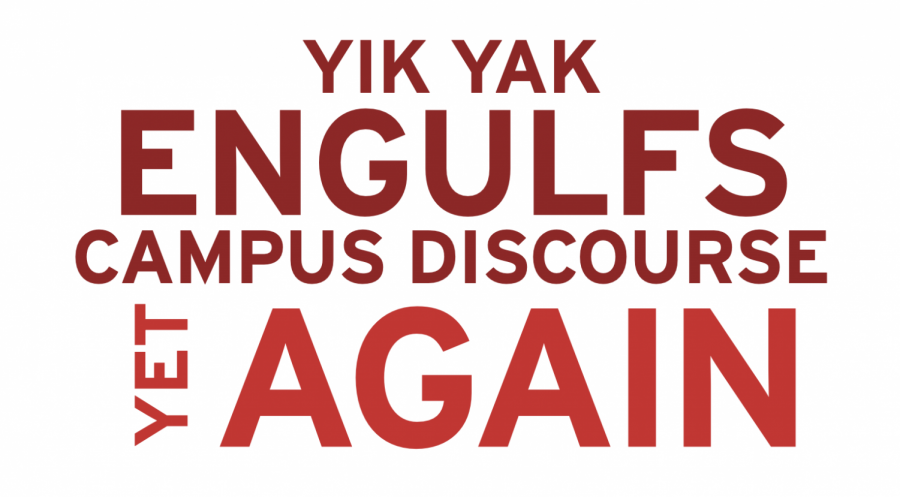 WHAT IS YOUR EXPERIENCE WITH YIK YAK? SHARE YOUR PERSPECTIVE WITH US. FILL OUT THIS FORM TO MAKE YOUR VOICE HEARD IN OUR COVERAGE.

After Yik Yak, an anonymous social media platform surged across the student body this semester following the app’s controversial comeback, Vice President for Communications and Acting Chief Diversity Officer Laura Jack responded to what she called “problematic and racially charged” posts on the platform in a Sept. 22 campus-wide email.

“Colgate has experience with this platform and the kind of cowardly and racist postings its anonymity can breed […] If members of the Colgate community are specifically found to be posting messages that are in violation of the University’s Code of Conduct standards, they will be held accountable,” Jack said.

Through Yik Yak, users within a five-mile radius can anonymously write posts and upvote, downvote, or comment on other posts. Jack’s email encourages users to downvote and report all inappropriate posts to both the app, as well as Colgate’s Title IX Office.

“I personally have never been in support of any anonymous versions of social media,” junior Claire Rose said. “I think that the platforms we have currently create enough of a harmful environment while our names are attached to what we say. I can’t really imagine how anything good could come out of YikYak.”

Since its creation in 2013, YikYak has boasted a problematic history, harboring racist, targeted and discriminatory posts on the platform that reached a peak amid the Association of Critical Collegians “Colgate For All” sit-ins against racial injustice in 2014 and 2015, according to a 2015 episode of Gimlet’s Reply All Podcast. The episode recounts the experience of one of the organization’s leaders — Melissa Melendez ’14 — a target of much hatred on the app and the administration’s response.

“I was exhausted, angry, and sad. And on top of that, I didn’t know who to trust. I was in the middle of nowhere and the [Colgate] bubble was toxic,” Melendez said in the episode, ringing a familiar tone to much student discontent with campus discourse on the app today.

Jack’s email recalls this history, asserting though that the community came together positively in response. Gimlet’s podcast interviewed faculty who participated in what became known as the “Takeback,” where the community started using the app to spread positive messages, with professors often resisting the app’s anonymity by signing their names on their posts.

“The last time there were racist, sexist, and simply unacceptable posts that are the antithesis of our shared values, the Colgate community rallied together to reaffirm our values. (Some individuals even tried to flood Yik Yak with positive messaging reflective of our support for all members of our community),” Jack’s email said.

The Code of Conduct standards as found in the Colgate Student Handbook states: “Members of the community are expected to be good digital citizens and to refrain from online misconduct, such as feeding anonymous gossip sites, sharing inappropriate content via social media, unwelcome messaging, or otherwise using the ease of transmission and/or anonymity of the Internet or other technology to harm another member of, or group within, the university community.

THIS STORY IS PART OF A LARGER INVESTIGATIVE PROJECT. THE COLGATE MAROON-NEWS WILL SHARE UPDATES AS THEY BECOME AVAILABLE.