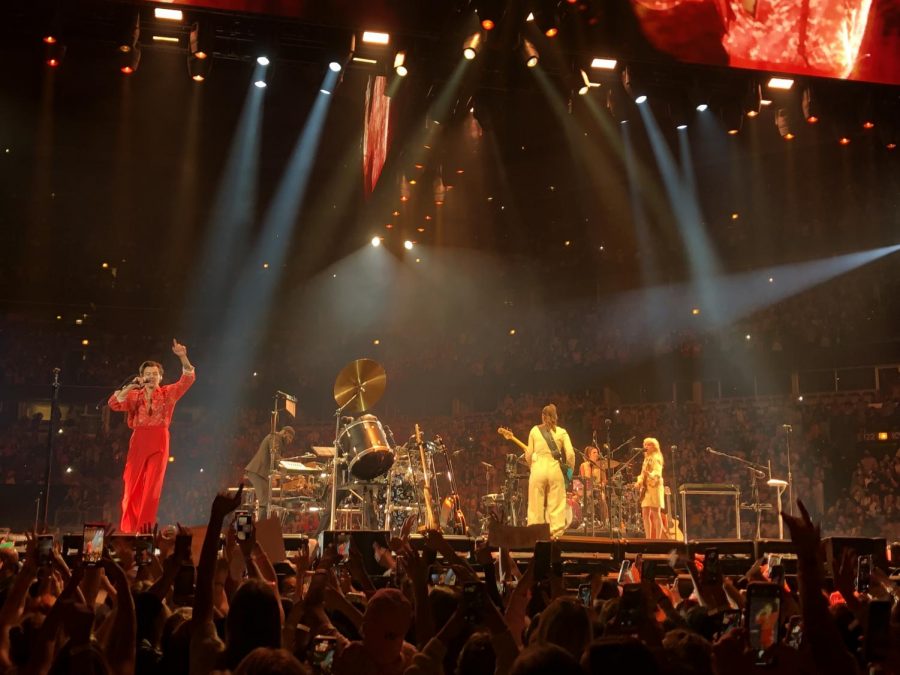 A NIGHT TO REMEMBER: Harry Styles performed at the United Center in Chicago on Sept. 24 and 25, an event marked by the uncertainty surrounding live events in the midst of the COVID-19 pandemic.

There isn’t an empty seat in the stadium, and the audience delivers high decibels of praise before he even begins to sing.

Sitting behind a pit of hand-raising and hair-whipping fans, it takes little effort to see that Styles’ apparel is as elegant as his personality: a pair of bright orange Gucci pants that reach to his ribcage complements a flowy top, unbuttoned to showcase a silver cross necklace and an underlying spread of black-and-white tattoos. He sports a shadow of scruff that catches his lips when they meet the microphone and a coiffed head of hair that whips around as he dances with his arms outstretched. It’s his second night in Chicago, but his energy would never reveal that. During the upbeat numbers “Golden” and “Adore You” from his album “Fine Line,” Styles flails his arms as the chord of his microphone mirrors his movement. His expressive dances continue for the entirety of the show, while he pauses only to whisper and laugh to his bandmates while making friendly hand gestures to audience members.

Every filled seat and fanatic gesture feeds his spirit. But “Fine Line”, released in 2019, consists of much more than catchy beats to excite an audience. On songs such as “To Be So Lonely” and “Cherry,” Styles reminisces on the bitter, biting experiences of heartbreak. Performing both numbers at the United Center, he seamlessly transitions the audience from dancing to tears within the span of ten minutes. When he slows down the set, the silence that builds beneath his voice is resounding. As despair enters the eyes of Styles, I too find myself uneager to dance, floored by emotion. Looking around at a still audience, I at once realize that I’m not alone. I am reminded of the name of the concert series, “Love on Tour,” and understand the complexity of the title. “Love on Tour” isn’t just song and dance. It’s reflection, honesty and euphoria. It’s better for its contrast. The epitome of what it means to love, and be loved.

I’m standing next to a friend I’ve met only months prior to my first-year studies at Colgate and thinking about how lucky we are to share this experience together in her home city. Here’s Madeline and I, a couple of students who sit next to each other in General Chemistry, standing shoulder to shoulder at the United Center. Surely, our lives have changed direction entirely as we’ve begun our collegiate studies in Hamilton. Surely, our lives have changed direction with the emergence of the COVID-19 pandemic. Styles is eager to acknowledge this — and how lucky we are to finally gather for an event that had been postponed for two years. But at this moment, I feel the change as a moment that’s tangible. I look at her, screaming underneath my mask, and she’s screaming underneath hers. She’s home, and I’m in a city I’ve never been to, watching someone conquer a room with their craft. Concerts are back, and Styles thanks us for a life-changing couple of years. Maybe it’s that I feel myself growing up — but I certainly feel myself changing, as he describes. We’ll return to class this Monday sharing something new.

To Styles, finding love seems simple. His smile catches the light and displays on the jumbotron as he stops his set to read a sign: “Convince my boyfriend to propose.” He’s stopped in his tracks, and begins a conversation with the couple, asking how long they’ve been together. They reply that it’s been seven years.

“Let me look in his eyes,” he says, leaning close to the audience and hovering over his microphone. “Let me look into his eyes. Yeah. He’s going to do it.”

Laughter roars as the music continues, and the room is filled with both subtle and overt proclamations of love. Bright flags continue to fly on stage as Styles waves them over his back and around his arms, singing his hit “Treat People with Kindness”. Couples catch each other’s glance and focus their eyes back on the stage as Styles pays homage to those who have made the tour possible — his crew, graphic design team and band. Especially in the climate of uncertainty caused by the COVID-19 pandemic, he is sure to acknowledge those that have helped make an event like this possible.

“Love on Tour” in Chicago was a night to remember. It was a night that brought performers, lovers and Colgate students alike into the comfort of an accepting environment. A whirlwind snapshot of romance in the windy city, Harry Styles convinced me that concerts are back. Let’s hope they’re here to stay.