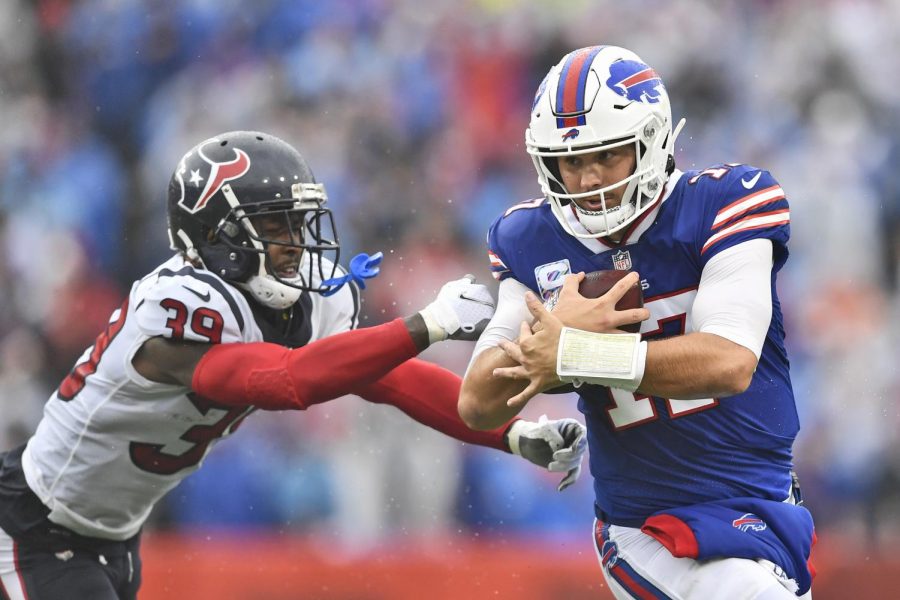 MAFIA MOMNETUM: After a disappointing Week 1 loss to Pittsburgh, the Buffalo Bills have been rolling, and are primed to beat Kansas City on the road.

We have reached the point in the NFL season where, if you’re betting against a team from the NFC East, it’s a pretty safe bet. The Carolina Panthers have shocked the world this season, going 3-1 through four weeks. Quarterback Sam Darnold has seemingly revived his career and leads the league in rushing touchdowns. Yes, you read that correctly: rushing touchdowns. Look away, Jets fans, because the Darnold train is not slowing down anytime soon. The Eagles’ offense is filled with weapons, but never seems to be able to get it done. Between Jalen Hurts, Miles Sanders, Jalen Reagor, DeVonta Smith and Zach Ertz, you would expect them to score at least 20 points a game. However, the Eagles will need to be patient with Hurts in his second year in the league. The Panthers defense will manhandle this developing Philadelphia offense, and the Eagles will not fly on Sunday.

I think the Bills will win this game. But, at the bare minimum, I expect them to cover this spread. The fewest amount of points Kansas City has given up this season is 29 against the Cleveland Browns in Week 1. Meanwhile, the Bills have an offense that is absolutely humming right now. Buffalo put up 40+ points in back-to-back weeks against Washington and Houston. Not to mention, they have already put together two shutouts this year defensively; most teams don’t get one in a full season. They’ve given up an average of just 11 points per game. Besides their Week 1 blunder against the Pittsburgh Steelers, the Bills have been nothing short of dominant on both sides of the ball. The fact that they aren’t the favorite in this game must be because of Kansas City’s home field advantage at Arrowhead. But, for me, home field won’t guarantee the Chiefs anything. Give me the Bills to cover. And, honestly, give me the Bills to go into Arrowhead on Sunday night and win this game.

This game is one of the best matchups of the week, and features two teams that surely view this contest as a major test. But, I truly believe this will be a game that just increases the hype building around the Browns, or, as my friend from Cleveland affectionately calls them, “America’s Team.” Don’t get me wrong, LA has a solid team, and a bright young quarterback in Justin Herbert that can go toe-to-toe with any other team in the league. However, the Browns simply can win in so many different ways, and that will prove to be the difference on Sunday. They have offensive and defensive lines that can win it for you in the trenches. They have a combination of running backs in Nick Chubb and Kareem Hunt that can dictate the pace and terms of any contest and wear defenses out. Baker Mayfield has shown the ability to change his play style depending on the situation- either slinging it to his weapons on the outside, or serving as more of a game manager and cashing in on play action. The Browns can win shootouts, or slugfests like they did last week against the Vikings. In a great matchup that should figure to be close, the Browns will pull away and make a big statement.

This one seems too easy. The Bengals are tied atop the AFC North division at 3-1, but they’ve had a pretty easy schedule thus far, with their four opponents being 4-12 throughout the first four weeks of the season. Joe Burrow had one stellar week, but that was against the Jaguars, the laughingstock of the league (shoutout Urban Meyer). In the previous two games, Burrow had four interceptions. I don’t see the Bengals defense stifling this red hot Packers offense who has averaged 30.7 points per game over their last three since being stomped on by the Saints. Aaron Rodgers hasn’t thrown a pick since week one and he’s finally dialed it in with his best receiver, Davante Adams. The Bengals haven’t faced any real competition this year, and I think the Packers win this in a landslide.