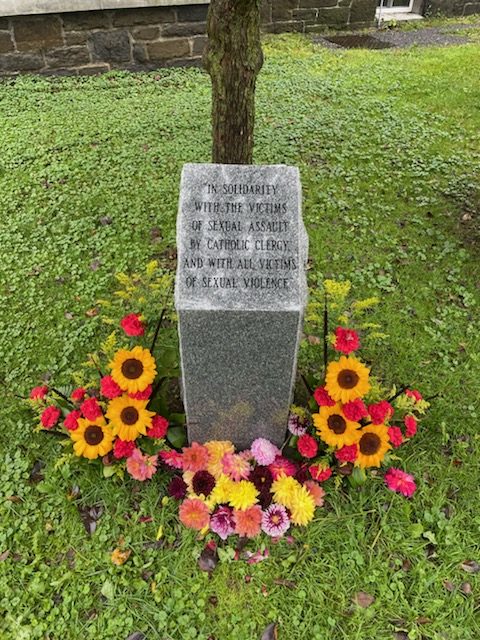 ACKNOWLEDGING THE PAST: St. Mary's Church on Wylie Street dedicates a memorial to victims of sexual assault.

“All are welcome to stand in solidarity with those who have experienced sexual assault, as our parishes dedicate a perpetual memorial to promote healing and a commitment to change,” the invitation to the community disseminated by Fr. Jason Hage of St. Mary’s said.

In an introduction to the ceremony, Charles A. Dana Professor of Psychological and Brain Sciences Professor Rebecca Shiner spoke to the necessity of such a memorial for the local Catholic community, as well as all victims of sexual assault and abuse.

“There is a deep human impulse to memorialize places where significant things have happened,” Rebecca Shiner said. “But our group was startled to learn that, despite the massive loss of life, security, wholeness and peace rocked by the crisis of sexual assault and abuse both within and beyond the Catholic Church, there were very few places where people could go to weep, to grieve, to rage and to remember. We are here today to dedicate this monument as a gift and a reminder, not just for our little church but for our whole community.”

In the wake of the Pennsylvania Grand Jury report in response to pervasive sexual abuse of children within the Catholic Church, SARP has sought to confront and explore the difficult questions that the community has wrestled with as these abuses come to light.

“The question that motivates the group is, what can we as a bunch of parishioners do in our local community and the broader church to both atone for and also and prevent sexual assault and abuse, what can we what can we do to bring healing [and] what can we do to prevent things in the future and what can we do to stand in solidarity with all the victims of sexual abuse and assault?” Associate University Chaplain, Catholic Campus Minister and SARP member Mark Shiner said.

The group, which is open to all, consists of parishioners of St. Mary’s and St. Joan’s Roman Catholic Church in Morrisville, N.Y., members of the Colgate Newman Community and residents of the Hamilton and Colgate communities. Prior to the dedication of the memorial, SARP’s previous efforts to engage the community on the matter include their sponsoring of a showing of “Spotlight,” a film about the Boston Globe’s uncovering the sexual abuse scandal in Boston, with a panel discussion following the film. Additionally, the group is working with the diocese on initiatives such as educating the community about sexual assault and sexual abuse, having been asked to rewrite the curriculum surrounding this issue taught in Sunday school to the younger generations.

“The Catholic Church is so big, and it’s hard, you know. People always just assume that if the Pope does something or the bishop does something then that fixes everything, but we kind of realized that real change is going to happen in both trying to engage diocesan structures but also trying to really do things locally,” Mark Shiner said. “The fight to get a plaque of some sort in the cathedral might be a bigger one than doing this, but hopefully doing this will make it easier to do it in other places.”

The notion of working to combat sexual assault and abuse in the Catholic community locally, as opposed to from a top-down institutional approach, was reiterated by SARP member Margaret Wehrer in her remarks at the ceremony.

“Two things were clear to us from the very beginning. First, the problem of clergy sexual abuse was a problem that the laity would have to fix — the clergy weren’t able, and, in many cases not willing, to do the things need to be done. The second thing we all knew was that true change could only come from the bottom up, regardless of what the Pope, or the bishops or the priests did at the institutional level,” Wehrer said. “We wanted to transform our parish and the places where we live and work.”

Wehrer explained that SARP’s aim is to reverse a tradition of silence in both the Catholic Church and throughout society as a whole that, for a long time, perpetuated not just clerical sexual abuse but sexual violence in all of its forms.

Russell Colgate Distinguished University Professor of History and SARP founding member Ray Douglas offered a few words as well, in which he depicted the memorial as a monument to truth that stands against a great deal of effort, time and money invested over the years to conceal it. To Douglas, this aligns with what it means to be a Christian.