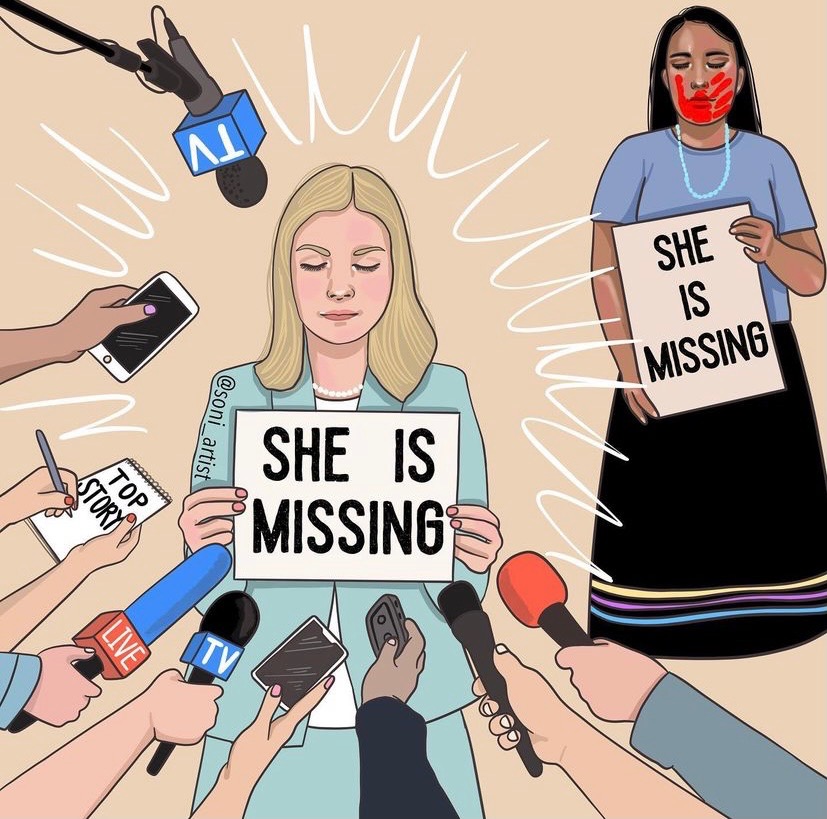 Printed with permission of @soni_artist

News of Gabrielle Petito’s tragic disappearance and death has flooded the media, from the New York Times to Fox News, since late August 2021.

According to the New York Times, Petito, a 22-year-old travel influencer, did not return from a two-month-long cross-country trip with her boyfriend, Brian Laundrie. Her many posts on Instagram and YouTube from the summer trip are haunted by a bright smile and disposition that conceal the pain of an abusive relationship.

On Sept. 11, Petito’s family reported her missing after not hearing from her for nearly two weeks. Her remains were found on Sept. 19 in a national park in Wyoming. Her death was ruled a homicide. Wyoming, according to the Guardian, is also where over 700 Indigenous individuals, primarily young women, have been reported missing since 2011.

The Indigenous women’s cases received none of the attention that Petito’s did. In Wyoming, only 30 percent of Indigenous female homicide victims are given newspaper coverage, compared with 51% of white female and male victims according to National Public Radio (NPR).

In one week, The New York Post released three front-page articles on Petito’s disappearance. The New York Times released a breaking news story, a live briefing and an emergency news alert on Petito. On Sept. 22, with the release of a coroner’s report confirming Petito’s death, the young woman was the top story on the websites of Fox News, the Washington Post, USA Today, BuzzFeed, ABC, CBS, CNN and NBC. As of October 5, 2021 the hashtag #gabbypetito had more than 1.3 billion views on TikTok.

Compare this to the media’s response to the disappearance of 39-year-old Mary Johnson of Tulalip Tribes. Johnson disappeared en route to a friend’s house in November 2020, in Sedro-Woolley, Wash., not far from the home of her estranged ex-husband. The case garnered almost no media attention, despite outreach efforts from Johnson’s mother.

Johnson’s story is just one of thousands within the crisis of missing and murdered Indigenous women. Indigenous women are killed at 10 times the national rate. According to NBC News, nearly 2,000 Native American women and girls have vanished in the last 40 years. Given the expansiveness of this crisis, it is especially tragic that it has received so little attention.

Three Native American scholars explained why Petito’s case was treated differently than that of Indigenous women.

“I think that people don’t expect that something like that could happen to a young, attractive white female because of how highly society regards white females,” Karen Kaniatobe, Education Coordinator at Native Alliance Against Violence, an Oklahoma-based tribal domestic violence and sexual assault coalition, explained.

“It implies as far as media bias is that there are racial preferences,” Kaniatobe shared. “What they’re saying is, some deserve life and others don’t.”

“This large disparity between media coverage is the result of the white supremacy and implicit bias that is built into this country … many Americans don’t know that Native people still exist.”

Carvell expressed that Indigenous people are primarily portrayed in American media as mascots, relics of the past, while the objectification and dehumanization of Indigenous women has been normalized in American culture.

“We are seen as ‘Indian Princesses’ or the derogatory ‘Squ*w,’” Carvell shared. “Halloween costumes from national retailers also perpetuate this stereotype with their costumes of Native women. This oversexualization has led to the staggering numbers of missing Native women.”

“My frustration reaches new heights due to jurisdictional mazes and a lack of response from investigating officers. They do not take the reports of murdered or missing individuals seriously.”

As Koester said, federal and state authorities often fail to protect Native women and girls. According to Indian Law, between 2005 and 2009, U.S. attorneys declined to prosecute 67 percent of the Native American country matters referred to them involving sexual violence. In Native communities, sometimes these crimes are completely ignored.

“I really believe that race and stereotypes have a lot to do with the inaction of police departments, especially in border towns. It sometimes feels like we are not worth their time to file reports or do a thorough search,” Kaniatobe said, echoing Koester’s statement.

Kaniatobe, through her work at the Native Alliance Against Violence, seeks to bring hope to those whose daughters, sisters and friends have vanished or been killed, who have been ignored by law enforcement, attorneys and media across the United States.

“What is most important about the work that we do here is to let people know that we’re listening, that we’re watching.”

She hopes to help all victims of abuse and domestic violence.

“It happens everywhere,” Kaniatobe explained. “Domestic violence can happen to anyone, at any age, of any race, evidently, with Gabby.”

Kaniatobe feels immense sympathy for Petito and her family. However, the safety of Native women is just as important.