Shipping Up To Boston: My Trip to the American League Wild Card Game 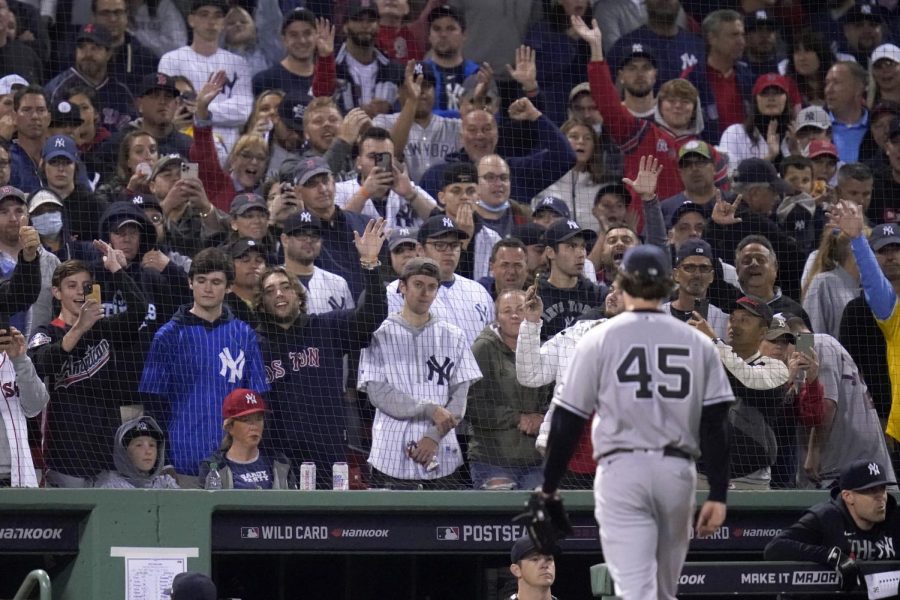 GOODBYE GERRIT: New York Yankees pitcher Gerrit Cole was escorted from the mound by the Boston faithful in the third inning of New York’s loss.

The Red Sox are losing to the Nationals by a score of 5-1. It’s the last day of the season, and the Red Sox need to win to avoid a one game playoff to get into the Wild Card game.

There’s no hope. I am already in the mindset that the Sox will need to play the extra game to even get into the Wild Card game. But, I was wrong. When it looked like the team had nothing left in the tank, they finally got some offense going, and tied the game at five apiece in the seventh inning.

To clinch the victory, Raffy Devers hit a 447 foot bomb in the ninth to send the Red Sox to the Wild Card game at Fenway Park to face the vaunted New York Yankees.

Postgame, I am pumped. We get the Sox and Yanks at Fenway. You cannot ask for anything better. My girlfriend’s dad is a big Yankees fan, so I told her to text him and tell him it’s on for Tuesday – a little friendly banter. A few hours later I got a response from my girlfriend: “Do you want to go?” Thinking I read my phone wrong, I did a double take.

“Are you serious?” I responded.

And she was. Four tickets right behind the Yankees dugout. I was freaking out.

Flash forward to Tuesday, the day of the Wild Card game. Right after my 9:55 class, I packed my bags to make the 4.5 hour trek to Boston, playing “Shipping up to Boston” and “Dirty Water” along the way to get me hyped up, and boy, was I hyped up.

We got there before first pitch and it was buzzing around Fenway Park. A tense energy was in the air. It was do or die; this was it. You play 162 games for this.

We got into Fenway with the smell of the field, Fenway Franks and the postseason feel greeting me on the way in. I was deep in enemy territory behind the Yankees dugout, surrounded by pinstripes and guys in wife beaters. Of course I was still sporting my “Do Damage” sweatshirt and David Ortiz jersey that stays unwashed for the postseason.

The lineups were announced and I was booing at the top of my lungs, loudest for Giancarlo Stanton and Gerrit Cole. My girlfriend’s mother looked over at me, mortified, and all I could do was shrug and smile. They were certainly in for it, as my antics were on display throughout the game.

Fenway was unlike anything I had ever seen that night. Everybody was constantly on their feet. It was the loudest I have ever heard the 109-year-old stadium that I have been going to for 17 years. The Red Sox players noticed it too. “The crowd was unbelievable,” Wild Card starting pitcher Nate Eovaldi said after the game. “They were locked in from first pitch on, and we were feeding off that.”

Eovaldi was absolutely shoving in this one with eight strikeouts over five innings. Xander Bogaerts came up with a huge home run in the first inning, as did Kyle Shwarber in the third, and the Yankees’ bats were just silent. Cole absolutely choked, and that is not what you want to see out of your $324 million starter (and I made sure to tell him).

The Red Sox are one of my biggest passions, and that night at Fenway was the most in my element I think I have ever been. Fenway was electric – everybody standing for every two strike situation, cheering after the home runs, chanting “Geeeeerrrrrrit” at starter Gerrit Cole, and singing “Dirty Water” when all was said and done. Although I was just one out of 37,731, I thought my contribution to the atmosphere was pretty enormous.

As Gleyber Torres flew out to Kiké Hernandez to end the game, I jumped up and down like a kid with the biggest grin on my face. It was hands-down one of the best sporting experiences of my entire life. To be able to experience a one-and-done Wild Card game with the biggest rivalry in sports, so close to the action, was absolutely incredible. It’s possible (and more likely than not) that I made a fool of myself in front of my girlfriend and her parents, but I think it was worth it in the end, as it was a night I will never forget.