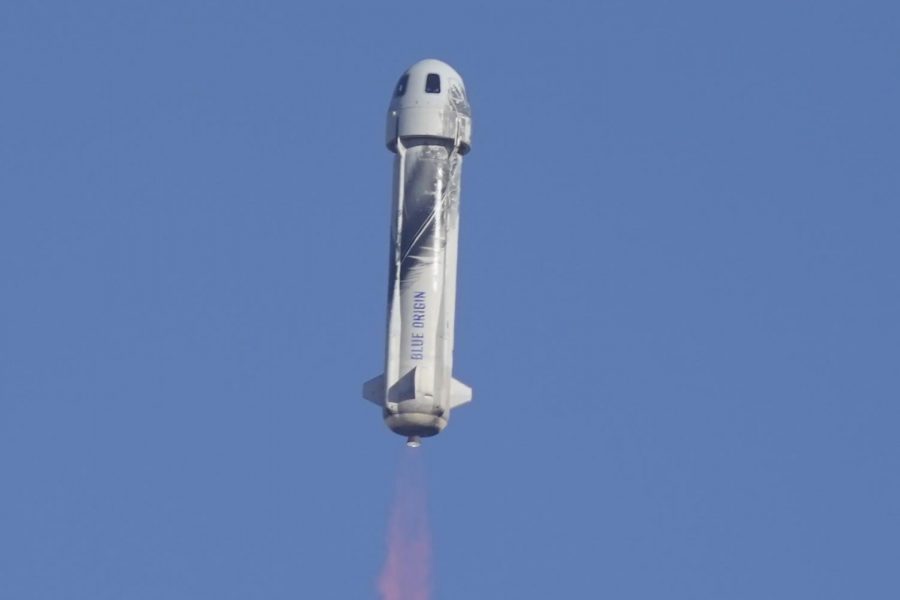 Jeffrey Bezos spent approximately 5.5 billion dollars on his short voyage into space in July, according to Global Citizen. The four-ish minutes sans gravity cost Bezos 2.7% of his $205 billion net worth, and his justification (or lack thereof) is about as sound as the rocket itself.

Private companies racing to industrialize space sounds like the premise to a sci-fi novel, but when Bezos founded Blue Origin in 2000, his vision was to “expand, explore, find new energy and material resources and move industries that stress Earth into space,” according to the Blue Origin website. The company has faced more than its share of controversy in the following decades, most recently highlighted in an open letter from 21 current and former employees. The letter states that the company is “rife with sexism,” has a sizable carbon footprint and is taking considerable safety risks with the launch of the New Shepard rocket. One engineer posted to Lioness, a whistleblower-friendly forum, that, “Blue Origin has been lucky that nothing has happened so far.” Despite multiple red flags, the New Shepard just underwent its 18th launch. The open letter made it increasingly clear that employees are justified in their concerns.

The irony of Blue Origin’s mission would be comedic if it weren’t so horrifying; the company’s many “blind spots” have contributed to an incredibly hypo- critical and toxic environment that runs deeper than the classic ‘corrupt billionaire’ narrative that is often tied to Bezos. Bezos and Blue Origin are sacrificing the Earth they claim to be working to save. The open letter states that despite Bezos’s ‘vision,’ no concrete plans to become carbon neutral or even significantly reduce emissions are in place. Bezos told MSN- BC, “We need to take all heavy industry, all polluting industry and move it into space, and keep Earth as this beautiful gem of a planet that it is,” an incredibly ironic statement coming from the Chairman of Amazon, a company whose carbon emissions rose 19% last year, according to the company’s 2020 sustainability report.

Bezos took his second trip to space Wednesday, Oct. 13. He was accompanied by four crew members, among them Canadian Actor William Shatner. The rocket just scraped the Kármán line, the boundary between earth’s atmosphere and space, before parachuting back to Earth. The approximately ten-minute flight cost around $5.5 billion. Just five of these trips would roughly amount to the cost of ending hunger in America for one year, according to CEO of Hunger Free America Joel Berg. The New Shepard has had fifteen consecutive missions since 2012. It would be unfair to expect Bezos to single-handedly feed America’s impoverished population; however, it is distasteful and inaccurate to claim that these trips are in the name of bettering Earth when he is directly ignoring the citizens of his ‘beautiful gem of a planet.’ If the wealth disparity between Bezos and his fellow earthlings wasn’t prominent enough on land, the New Shepard allowed him to put 60 miles and $200 billion between himself and the average 57-year-old American. The moment the New Shepard launched, Bezos became as disconnected as ever. Insider estimated that Bezos brings in almost $150,000 per minute, while the average American earns only a fifth of that per year, according to the United States Census Bureau. This incredibly real illustration of wealth disparities begs the question: how did we get here?

Wealth disparities in the United States run wider and deeper than those of any other major developed nation, according to Inequality.org. As of July 20, this separation materialized as a 60-mile rift between man and Earth. Perhaps billionaires play- ing astronaut is just a symptom of an economy that allows the rich to only get richer, often at the expense of minimum wage workers. Perhaps, like the New Shepard, this single example of tone-deaf billionaires only scratches the surface of America’s deep atmosphere of economic inequality.