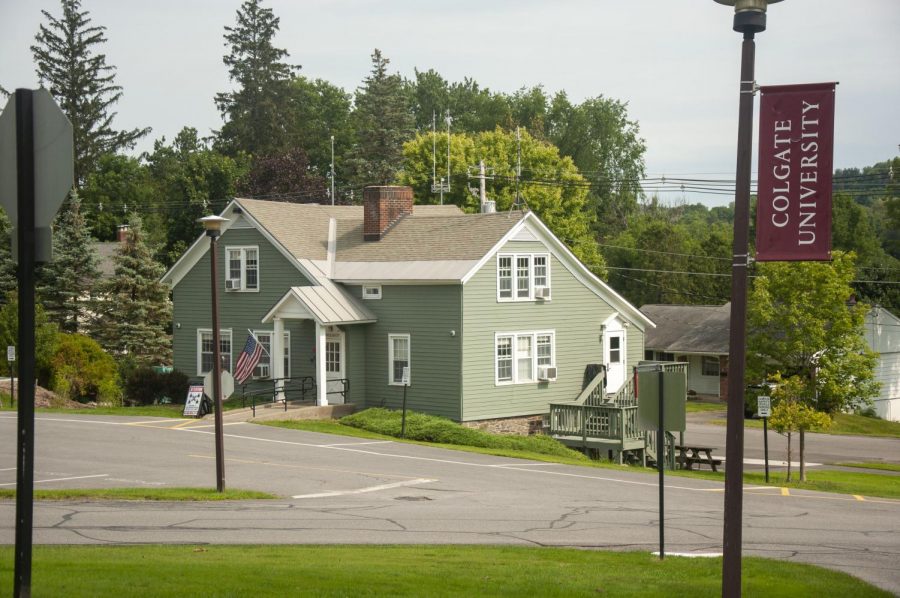 Hernon spoke about the initial stages of the recruitment process. The committee began by first posting a description of the position on the University’s Human Resources website outlining the required responsibilities. Given the significance of the position, the University contracted with an executive search firm that specializes in higher education searches, with a specialty in recruiting candidates for positions in college and university campus safety departments. Once the firm had assembled a pool of qualified candidates, the search committee began evaluating potential new directors by meeting with candidates throughout multiple rounds of interviews.

“The University was seeking a campus safety professional with experience in higher education and someone with a proven track record of working collaboratively with a campus safety team,” Hernon said. “The search committee was also seeking candidates who had demonstrated experience building relationships with students and campus communities.”

When asked about the decision to involve students in the evaluation and selection process, as well as the role of students during these discussions, Hernon explained that students are invited to serve on a search committee and are included as interviewers during on-campus visits with the final candidates in nearly every position within the Dean of the College division.

“Student members on this search committee included student volunteers for SOMAC and Hamilton Fire Department, because of their close working relationship with Colgate’s director of campus safety,” Hernon said.

Vice President and Dean of the College Paul McLoughlin selected a handful of Colgate students to serve on the search committee. According to committee member and Colgate senior Willa King, gathering the group of committee members was a natural process that expanded on previous searches for new Campus Safety leaders.

“I had previously served on the search committee for the Assistant Vice President (AVP) of Campus Safety, Emergency Management, and EH&S,” King said. “On that committee, we spoke a lot about what we wanted a new Campus Safety director to do, so Dean McLoughlin thought it made sense for the group to continue.”

McLoughlin also reached out to junior Kelsey Beausoleil, whose main responsibility within the group is to take part in the student-led interview process.

“The purpose of the student-led interviews were to gain a student’s perspective on the candidates’ qualifications for the job, as well as how well they may fit here at Colgate,” Beausoleil said. “[We] wanted to know what the candidates’ purpose for pursuing a career in Campus Safety, their past experiences and how those experiences would aid them in a director’s position here at Colgate, as well as delving into some Colgate-specific scenarios, given the uniqueness I believe our campus maintains.”

While the student panel awaited a final decision from the committee, Beausoleil noted how important it is to have students at the forefront of the selection process.

“While I do not know how the final decision will be made, the students who participated in the student interviews were able to anonymously relay our thoughts about the candidates after the interview, which was sent right to the committee members,” Beausoleil said. “I think that it is important for students to be involved in this process because Campus Safety officers’ main role on campus is to maintain the safety of students and faculty alike.”

When asked about general student involvement in the process, first-year student Tony Liu argued that students should be aware of the new director’s goals once the selection is made.

“I think students should have the right to know and participate, and the candidates participating in the selection should state their position and the measures they promise to take after taking office. Since Campus Safety serves all school members, including students, and has the right to dispose of them, the voices and opinions of the majority should be heard,” Liu said.

Hernon echoed these sentiments, noting the unique and invaluable perspective students bring to the selection process.

“It’s important for the candidates to see and hear from students as part of their interview process — to ensure they can understand who Colgate students are and what they are looking for as they define success in these particular roles,” Hernon said. “Students provide distinctive perspectives that other search committee members might not have, which is invaluable as the search committee reviews feedback about the candidates.”

Members of the committee embraced their role in facilitating these discussions and gathering student perspectives to help with the selection process. The new head of Campus Safety, as Beausoleil and King have noted, could potentially change the existing student perception of the culture surrounding Campus Safety by reorganizing the system currently in place.

Beausoleil also expressed her relative frustration with the way Campus Safety officers are perceived by students at Colgate as strict disciplinarians – a strained relationship that often leads to further dissonance between the administration and the student body.

“I understand that much of the student body sees Campus Security officers as disciplinaries on campus, when they hold more roles than that on campus,” Beausoleil said. “In the selection of a new Director of Campus Safety, I really wanted to see a candidate who was competent and passionate about their career, as Dan Gough was, but also someone who was willing to put in the effort to change campo’s relationship with students on campus––morphing more into resourceful and educational view, rather than disciplinary.”

The selection process came to a close this week when the University named Terri Stewart the new Director of Campus Safety.  According to the Colgate website, Stewart has had a long career in higher education safety, beginning with her time at Syracuse University working as a public safety officer and communication specialist. She has since held the positions of Director and Chief of Police at both Trinity Washington University in Washington D.C. and Ithaca College. In addition to her role as campus safety director at Nazareth College, Stewart also serves as an appointed co-chair of the Covid-19 Pandemic Task Force subcommittee, chair of the Behavioral Intervention Team, and a member of the Care Team.

Hernon expressed his excitement and enthusiasm for the success of the committee’s search process, and for the opportunity to work closely with Stewart in the future.

“As you can see, the incoming director brings a breadth of experiences and talents to this role,” Hernon said. “ I am looking forward to working closely with Terri, and she is looking forward to getting to know and work with this campus community starting in January 2022.”

In the news story released on Colgate’s website, Stewart expressed her sincere gratitude for the opportunity to become a part of the Colgate Community, as well as the pride and excitement she will bring to her new role in advancing and uplifting Colgate’s commitment to the health and safety of its students.

“The safety of our students, faculty, and staff is a tremendous responsibility,” Stewart said. “Drawing on my record of collaboration, community-based outreach, and meaningful partnerships, I look forward to leading the campus safety team and working alongside the University community to advance Colgate’s mission, vision, and values.”