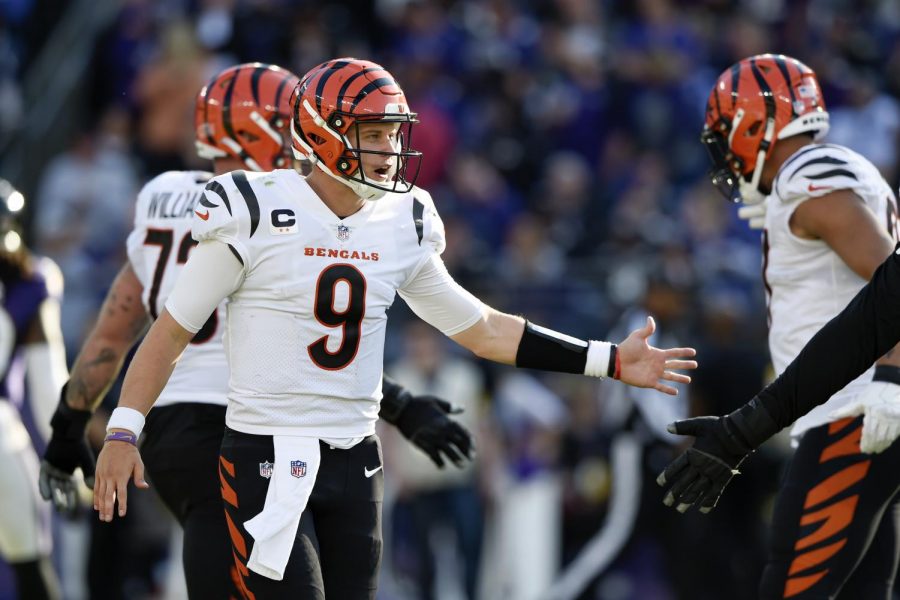 JOEY TOUCHDOWNS: Joe Burrow has powered the Cincinnati Bengals to a 5-2 record, putting them atop the AFC North and primed for a playoff spot.

The Detroit Lions are a better football team than their record indicates. This is not a team that should be winless going into Week 8. Almost all of their games have been wire-to-wire, and they have held their own with some of the best in the National Football League. Their strong showing against Green Bay in Week 2, as well as their nail-biting losses against San Francisco, Baltimore, Chicago, Minnesota and L.A. prove that this team is better than “0-for” teams of the past. Head coach Dan Campbell has his team playing aggressive football, as we saw early and often in the game against L.A. over the weekend, and I think that will eventually pay off for the Lions with a win. Quarterback Jared Goff has had some questionable turnovers, but overall his stint in Detroit has not been terrible. At times, he has even looked quite good. His performance against San Francisco was probably the best of the bunch when he threw for 338 yards and three touchdowns.

Meanwhile, the Philadelphia Eagles have just been plain bad. Contrary to their majestic soaring nature, the Eagles proved to be flightless birds against Derek Carr and the Las Vegas Raiders over the weekend (despite a ferocious garbage-time comeback attempt) and they currently sit at a 2-5 record, drowning in the miserable NFC East. Right now, it looks like Nick Sirianni’s men might be among the worst in the division, and I think the Detroit Lions are capable of taking them down. I expect the Lions to keep this one close, and if it’s a shootout — give me the Lions moneyline.

Call me crazy, call me a homer, call me stupid. The Kansas City Chiefs are crumbling in front of our eyes. Patrick Mahomes is still the best quarterback in the NFL, but defenses around the league are finding new ways to slow him down. He currently is tied for the league lead in interceptions with Jets lord and savior Zach Wilson. The Chiefs lost in Week 7 to a Tennessee Titans team that has a notoriously terrible defense and were getting destroyed even before Mahomes left the game with an injury. Additionally, their defense has been downright terrible this year and no longer enjoys the luxury of an otherworldly offense to cover up their flaws

Fully healthy, the Giants aren’t a terrible offensive team. They will be without star running back Saquon Barkley in Week 8 as he continues to recover from an ankle sprain, but the Giants were able to stomp on a strong Carolina defense in Week 8 without their star running back and their three best wide receivers (Kenny Golladay, Sterling Shepherd and Kadarius Toney). Daniel Jones is no longer concussed and is doing everything on offense: throwing, running and catching the ball. Expect Jones to do all that and more as the Giants roll over the Chiefs in Kansas City.

Yes, this pick is fully based on recency bias, but what a start for the Bengals. They marched into Baltimore this past weekend and destroyed the Ravens, who were looking like one of the best teams in the NFL. They haven’t had this good of a start since 2015; they had just six wins combined in the previous two seasons. I really didn’t believe in the legitimacy of this team, but man, they are good. Joe Burrow is having an incredible year coming off of his ACL tear last season. He has the 6th most yards in the league, 4th most touchdowns, 5th highest rating and a top ten completion percentage. Burrow had 416 yards against the Ravens this weekend and three touchdowns. Ja’Marr Chase accounted for about half of those yards, in one of the biggest games a receiver has had all year. On the other side of things, it’s the Jets. I don’t have to say much. They let up 54 points to the Patriots, who hadn’t won at home until this past weekend. They are also 1-5 against the spread (ATS) this season. They lost their starting QB Zach Wilson last weekend, and are probably going to start Mike White (who?) this weekend. They’re just in a terrible spot. This line has already shifted significantly, but whatever it is, strike the iron while it’s hot, and take the Bengals and the points.

For the last few years, people have been wondering when Father Time would finally catch up with Tom Brady. Many assumed that at a certain point, Brady’s elite play would start to regress as he made his way into his mid-forties. And yet, here we are, watching Brady get better. I don’t know if many people anticipated that the game of football would get this easy for Brady, who statistically is having an absolutely sensational year, and quite possibly his best start to a season ever. He’s tossed 21 touchdowns through seven games and has only thrown three interceptions, making his case for his fourth MVP award and first since 2017. The 6-1 Bucs have looked like a machine for much of the season with Brady under center, and that won’t change for this NFC South showdown. The familiarity the defending world champs have with so many of the same starters has led to more dominance this season, and that spells trouble for the Saints, who are still trying to find consistency in the post-Brees era. Maybe Brady and the Bucs will take their foot off the gas at some point, but it isn’t coming against the biggest threat in their division. Brady and company will win comfortably in NOLA on Sunday.