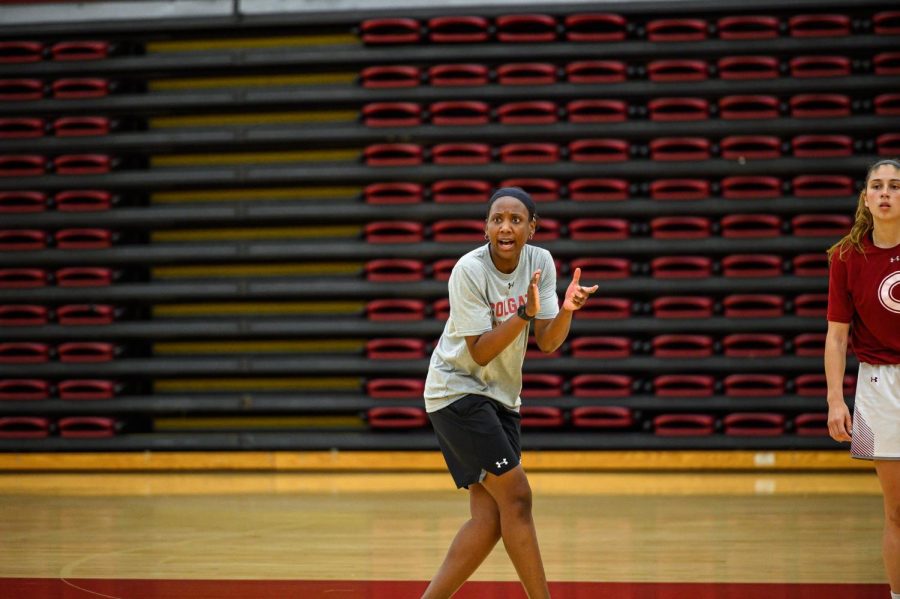 The sound of feet running across the hardwood floor and the steady bounce of a basketball can only mean one thing: college basketball season is right around the corner. The Colgate community eagerly anticipates the debut of both the men and women’s teams on Nov. 9. While the men’s team has retained the same coaching staff as last year, the women’s staff has experienced major changes, most importantly with their newly hired head coach Ganiyat Adeduntan.

Adeduntan is already showing signs of her will to win early on in her Colgate tenure. While the team stayed on campus during their summer training camp, she coordinated several team-building activities, from team meals to WNBA watch parties. Now that the team is in season, she schedules weekly meetings with her players to check in on them.

Senior guard Taylor Langan took notice of Adeduntan’s strength in chemistry-building immediately. Of her new coach, Langan said, “Not only was she focused on teaching the new offense, but she also made an effort to get to know us off the court. I remember one of the first conversations I had with Coach G and she said no matter what the outcome of this year on the court, I want everyone to enjoy themselves on and off the court. This just showed me how much she really cares about us as people.”

Junior guard Jenna Paul echoed the thoughts of her teammate on their new head coach.

“She is so knowledgeable and passionate about basketball,” Paul said. “Her desire for us to succeed as student-athletes, both on the court and in the classroom, is something I truly admire.”

As the team’s season opener against Cornell looms, Coach Adeduntan says her focus is “being competitive, falling in love with the process of being great, [and] coaching my team.” From a player’s perspective, the culture that Adeduntan is creating seems to have stuck. “I believe that my team has full faith in the new coaching staff that we are willing to do whatever it takes to win,” Langan said. “Everyone has accepted the new culture we are building and it’s going to be amazing to see all the pieces get put together for the season.”

When the referee throws the ball into the air for opening tip on November 9 at Newman Arena, Colgate Women’s Basketball will begin the Ganiyat Adeduntan era. She takes over a team that finished last season with a record of 1-8, and her players are already confident that this season will be different.

“I believe we can achieve any goal we set for ourselves, individually and as a team,” said Paul. “Coach G pushes us to be the best version of ourselves and believes in all of us wholeheartedly.”