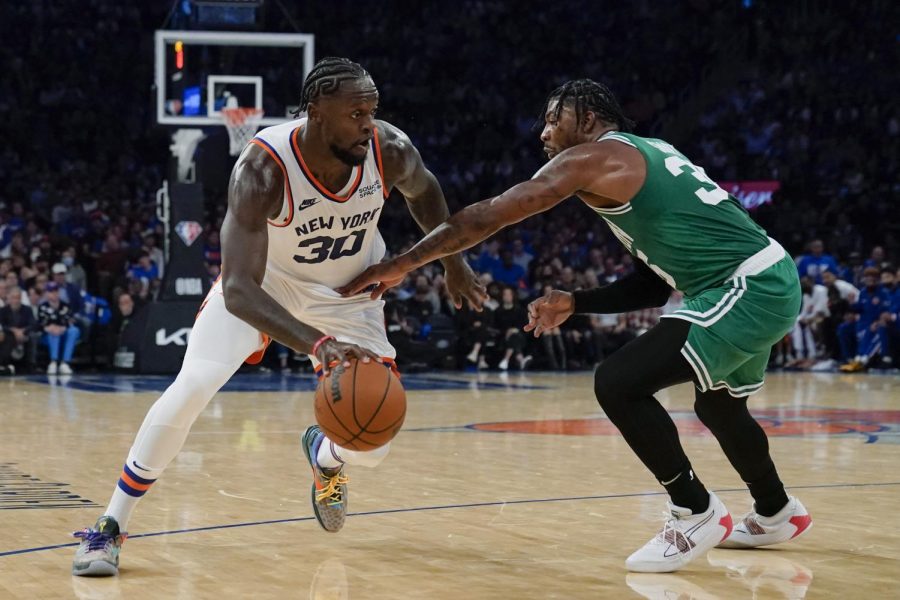 RANDLE WITH THE HANDLE: Last year was no fluke. Julius Randle has made the Knicks a contender, leading the team to a 5-1 start.

As a long-suffering Knicks fan, I was more than satisfied with the Knicks’s playoff-making performance last season. Julius Randle proved to be an all-star, Derrick Rose was one of the best bench players in the league and defensive-minded Coach Tom Thibodeau deservingly won Coach of the Year.

Going into the 2021-2022 season, I was hopeful the Knicks would take another step forward. With two big free agent signings in Bronx native Kemba Walker and French Olympic hero Evan Fournier, it seemed that general manager Leon Rose had rounded out the starting lineup and filled the offensive holes that were exposed in last year’s first-round playoff loss to the Atlanta Hawks.

Now, six games into the season, the Knicks are off to a better start than anyone could have imagined, with a 5-1 record that easily could have been 6-0 — the lone loss coming after squandering a lead against an Orlando Magic team the Knicks blew off the court the night before. Randle is showing that last year was no fluke: he currently leads the team in points (20.8), rebounds (11.2) and assists per game (6.5), justifying his four-year, $117 million deal. In the NBA, there are few plays more satisfying to watch than a Randle soft fadeaway jumper from the corner. But this is no one-man team. Fournier has proven to be an excellent addition, using his long-range sharpshooting to average 17.5 points a game. Likewise, Walker is off to a strong start, averaging 15 points as well as 1.7 steals per game. RJ Barrett, still just 21 years old, continues to show that he deserved to be the third overall pick of the 2019 NBA Draft, scoring over 17 points a game, knocking down threes and driving to the basket seemingly at will. Rose has again been an absolutely critical sixth man, averaging over 12 points and righting the offensive ship when it goes off course. The bench this season is much deeper, with Immanuel Quickley and Westchester native Obi Toppin (one of three NYC natives on the roster, along with Walker and Taj Gibson) providing needed energy and athleticism at times.

The Knicks have shown improvement so far in many different aspects of the game – most notably three-point shooting, passing and interior defense that has been aided by the return of a healthy Mitchell Robinson to protect the rim. The shooting has been much more consistent and the overall play looks more efficient and smooth. The Knicks are leading the league in three-pointers, averaging nearly 17 per game, up from about 12 last season, which earned them the rank of 21st in the league. With Walker (who is hitting nearly 58% of his threes) and Fournier (who is nailing about 4 per game) now on the roster, Coach Thibs has emphasized three-point shooting, and it has contributed to the Knicks generating 117 points per game thus far, up a full 10 points from last season.

The offense can certainly be explosive and the Knicks have grabbed huge leads in many of their games this season. They have led multiple games by 12 points or more. One thing that has me slightly worried, however, is that these leads have tended to shrink rather quickly, particularly near the end of games. Consequently, almost every game has ended up being a nail-biter. It could be fatigue from playing so many minutes (as some of the Knicks starters, like Randle and Barrett, so often do, typical of a Thibs-coached team), or it could be because the Knicks simply get complacent after taking a large lead. Yes, New York was able to pull out wins against the Celtics (in double OT), Bulls (after a last-second miss by DeMar DeRozan) and Pelicans (in what should have been an easy win against a team playing without Zion Williamson and Brandon Ingram), but they ended up throwing a game away to the Magic (the Magic’s only win of the season and the Knicks’ only loss). There are several dominant teams in the NBA this year, and if the Knicks want a chance at making it deep into the postseason, they need to work on maintaining their leads.

Overall, there isn’t much to complain about though. The Knicks are tied for first in the Eastern Conference, and they are a full two games ahead of the reigning champs, the Milwaukee Bucks. If the team can keep up anything like this level of play, they will have a bright future ahead.