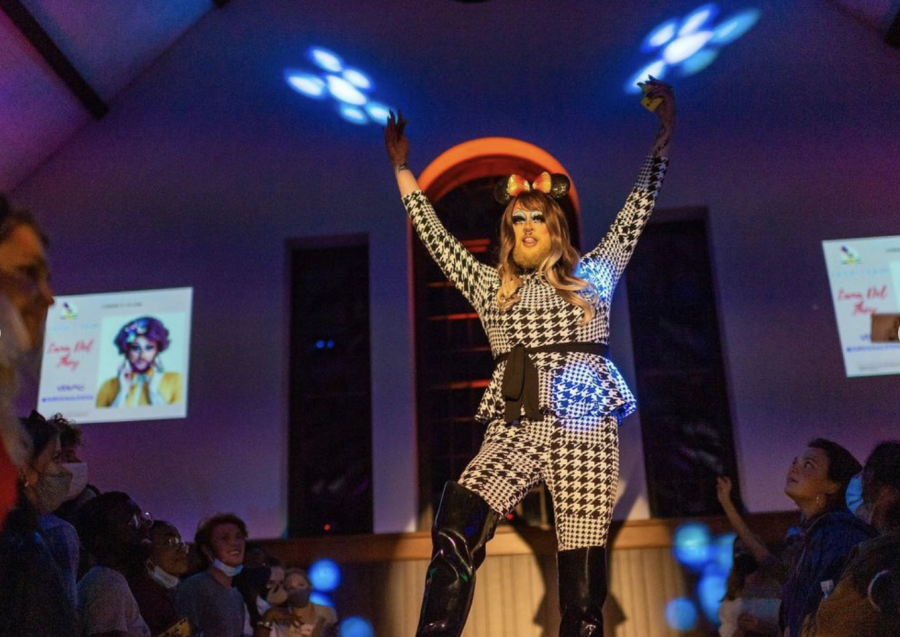 ANYTHING BUT A DRAG: A Halloween-themed drag show and dance party was presented as a part of LGBTIQA+ History month, making for a dance-filled night.

On Friday, Oct. 29, Colgate hosted a Halloween-themed Drag Show and Dance Party in the Hall of Presidents in honor of LGBTQA+ History Month. Six wonderful drag queens visited, each coming from different states, to give an entertaining and captivating performance. Thirty or so students attended, many of whom were in Halloween costumes. The host, Amanda Brown, entered onto the stage wearing a tight black leotard and devil horns. Hailing  from Wilmington, N.C., Brown goes by the drag name “Aman-duh.” Turning to address the audience, she asked who had not seen a drag show before, and most students replied that it was their first time.

The song “Once Upon a Time” played, and Brown took center stage. A bright spotlight fell upon her, dramatically casting her silhouette against the wall as the colors changed from white to gold. Oftentimes throughout the show, the stage lighting would shift in tandem with the music, creating a unique cadence and rhythm for each performance set.

Amanda stood on stage, making dramatic gestures and scanning the crowd. Suddenly, the music changed to a more lively beat, and she confidently strutted down the stage with her hands in the air. She mouthed the words of the song as she danced along the platform, turning to different sides of the stage to lip-sing to students.

Edi Bonfo, drag name Edi James, performed the second act and danced to “It’s My Party,” by Lesley Gore. She wore a short black dress, a green robe and a blonde fluffy wig. Energetically waltzing down the stage, James mouthed the words with great enthusiasm. Students began to hand out fake money, shouting words of encouragement as they swayed to the music. A girl to my right asked me why I was violently scribbling in my notebook while watching the show. After I said it was for the Maroon News, she laughed and replied, “This needs to be on the front cover.” She, along with the other students, was clearly invested in the performance, singing along with the songs as they danced and shouted.

In the third act, Chloe Spears from New York City performed the song “I Need A Hero.” She was outfitted in a blue Power Rangers suit and wore a short blonde wig along with blue smokey eyeshadow. Spears pirouetted across the stage, twirling around as she moved to the beat. As the performance progressed, students started to dance more and sing louder.

After Spears, Trisha Tayson, a drag queen from Binghamton, performed to a remix of “I Will Survive,” by Gloria Gaynor. She wore a long, strawberry blonde wig and a black leotard that had frills on its sleeves.

Lana Del They, from Delaware, had a bright yellow beard and wore a checkered dress.

Ms. Kitten Kaboodle, from Lake George, N.Y., entered the stage wearing a sparkling, sheer leotard, with blue lipstick. She shook her chest confidently and threw the money she collected in the air.

Throughout the show, Brown would reenter the stage to interact with the students. In one instance, she called out, “Who here is a virgin?” One person was pointed to by his friends, and Brown pulled him up on stage. He confidently showed the audience his catwalk and posed when he reached the end of the stage. Another time, Brown asked a girl to announce the raffle ticket winner. And by random chance, the number she read was her ticket number. However, the best participant Brown called on stage was the Dean of Students Paul McLoughlin. He walked down the stage in a blazer with kitten heels as the entire audience clapped and cheered him on.

After a break, the Queens came back on stage, each giving another performance. Again, the costumes and music were amazing. Trisha Tayson’s outfit during her second act was one of the audience’s favorites, as she wore a large white cape, adorned with ruffles, that completely covered her outfit underneath. At the end of the platform, Tayson stripped into a blue jumpsuit that had pink fringes running down the middle. Brown closed the show, wearing a silver leotard as she twirled around, walking back and forth. Students began to clap to the beat in her final performance.

The show ran from 8 p.m. to 10:30 p.m., meaning only the strongest of heart lasted until the end. Nevertheless, it was an exciting performance packed with great songs, confident dance moves, amazing stage lighting and enthusiasm from the audience. The engagement from students revealed the amazing quality of the Colgate community to be supportive and celebrate each other’s differences.