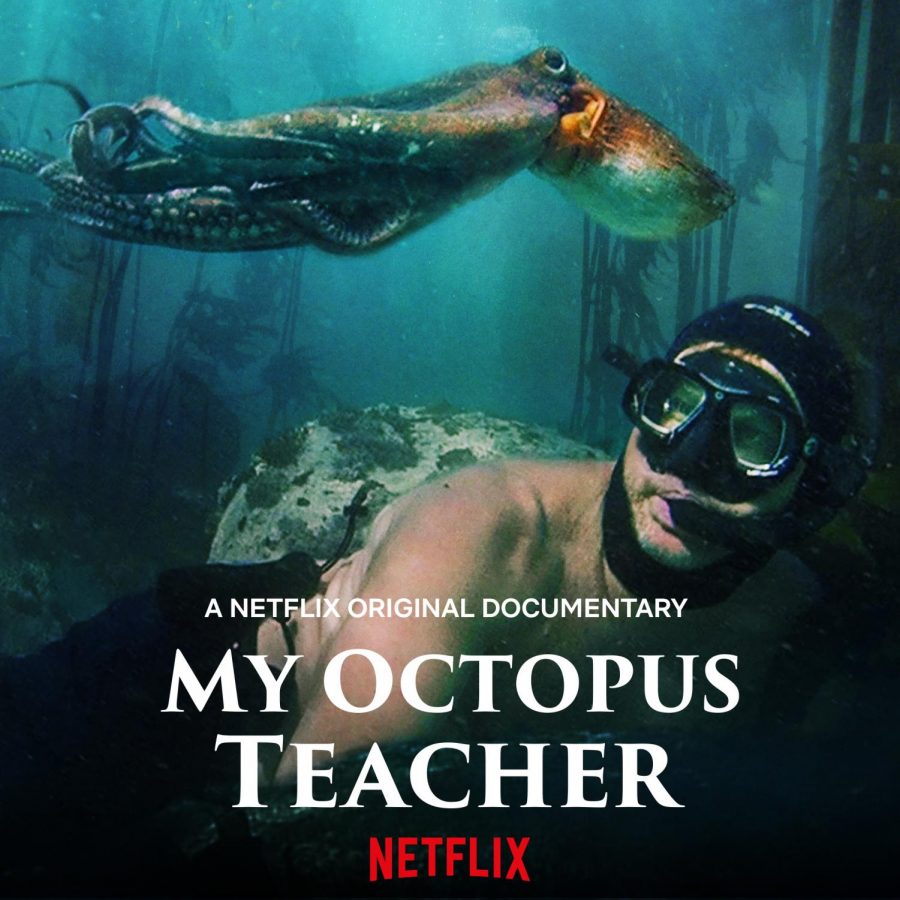 MY OCTOPUS TEACHER: The Netflix documentary follows marine biologist and diver Craig Foster as he travels to South Africa to to spend the year with an octopus.

On Oct. 29, the 2020 documentary, “My Octopus Teacher,” was shown in the Golden Amphitheater as part of the Friday Night Film Series. Pippa Ehrlich and James Reed co-directed the critically acclaimed documentary, which is exclusively streamed on Netflix this year. Ehrlich noted in an interview that her inspiration came from working with Craig Foster, the marine biologist and diver that the award-winning film follows. In fact, Foster initially proposed the idea of a documentary to Ehrlich, as he wanted his unique relationship with the octopus to be represented in film.

The documentary follows the heart-warming story of Foster’s travels as he spent a year with a wild octopus off the coast of South Africa. Foster, who had been battling depression and self-worth issues, began diving as a part of his newly formed daily regimen to pull himself out of a rut and see the world through a different lens.

After months of diving in freezing water along the coast of South Africa, Foster developed an unexpected interspecies bond with a cephalopod. Foster’s persistence and curiosity surrounding this octopus led him to visit the octopus’s kelp forest and memorialize her submarine routines for months on end. Finally, Foster is able to gain the animal’s trust and they develop a strangely beautiful bond. As the friendship persists for over a year, the octopus acts as a tour guide as she introduces Foster to hidden paradises throughout the Great African Sea Forest, home to thousands of unique species that live in harmony with their environment.

“What she taught me was to feel … that you’re part of this place, not a visitor. That’s a huge difference,” Foster said in an interview with the Sea Change Project.

The documentary is largely a call for wildlife conservation. Though many people view marine life as alien and out of reach to humans, “My Octopus Teacher” proves that the interspecies differences between cephalopods and human beings are minimal; we share the same planet, and the oceans are just as essential to human life as they are to sea creatures.

Through the award-winning documentary, viewers are able to visualize and believe our intrinsic bonds to other life on Earth. A critical first step towards protecting endangered species and environments is awareness, sympathy and understanding, which define Foster’s relationship with nature in the documentary. Underwater kelp forests are found bordering around 25% of our world’s coastlines and are the second most vulnerable marine ecosystem to the rising effects of climate change.

Critics raved and praised the movie’s ability to connect with audiences, holding a 95% approval rating on Rotten Tomatoes.

“It’s hard to know why audiences have responded so strongly, but I think that they are resonating with parts of the story that are universal to almost every person on Earth; love and friendship and connection and hope. This is deeply encouraging for me as a filmmaker, it demonstrates that despite all the environmental challenges we face, human beings continue to resonate with the awe and wonder of nature,” Ehrlich said in an interview with Sea Change Project.

“My Octopus Teacher” is not only a wildlife documentary that depicts the beauty of undiscovered nature, but it is a moving account of how a man struggling with his mental health discovered a sense of once-lost self-worth through an unexpected connection to nature and an unbelievable relationship with an octopus.