Looking Toward the Start of the Men’s Basketball Season 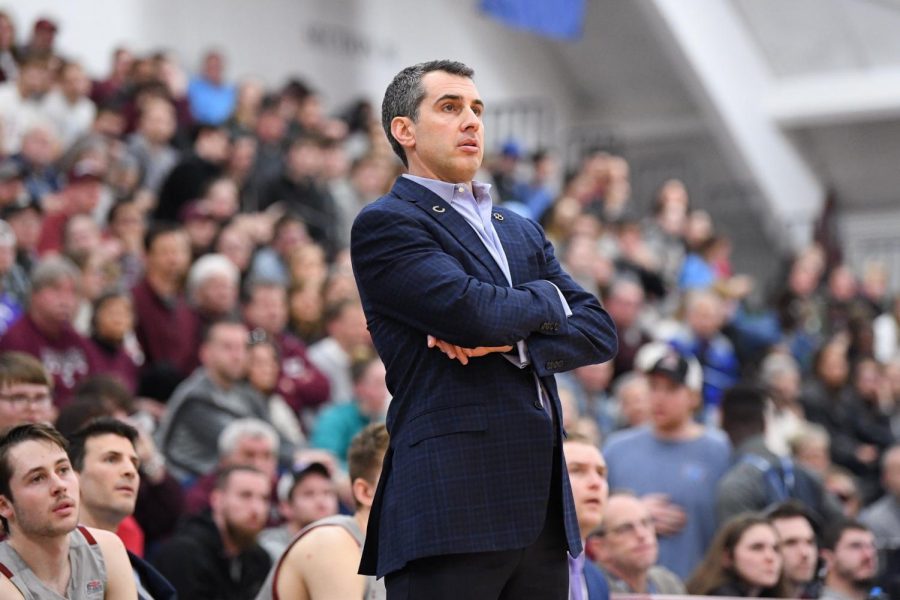 READY FOR BATTLE: Coach Matt Langel and the Raiders prepare for the 2021-2022 basketball season with a roster filled with returning players.

The Colgate Men’s Basketball team is coming off another phenomenal season and currently sits in second place behind Boston University in the Patriot League preseason poll. Last season, the Raiders finished 14-2, winning the Patriot League Championship and making their second NCAA tournament appearance of the last three years. The Raiders have also won two Patriot League Championships in the last three years, their first championship wins since the early 1990s. This year the Raiders have four starters, and six of their seven top scorers, returning, with only one first-year, guard Nicolas Louis-Jacques.

When asked about the preseason poll, Head Coach Matt Langel, recently named to College Hoops Today’s list of rising head coaches, said that any preseason poll is not something that the team places much value in. Instead, preseason focus is placed on taking the little steps necessary to prepare for a non-conference schedule that is extremely challenging this year.

Senior Tucker Richardson echoed Langel’s sentiments saying that one of the main challenges will be a grueling longer schedule, as well as the ability of the team to fight through any adversity that comes their way.

Junior Keegan Records, continued: “As long as we can play together and work together to be better every day, we will have a successful season.”

In terms of broader season goals, the main focus on everyone’s mind is winning the Patriot League Championship and getting back to the NCAA tournament. Additionally, Richardson said, “While we did that last year, this year we really want to win a game in the NCAA tournament once we get there.”

Langel continued saying that the best way to accomplish the team’s goals is to play their best basketball in late February and March.

“For us, it has proven beneficial to have home-court advantage in the Patriot League Tournament, so doing well in the conference slate to earn that opportunity is critical,” Langel said.

“The last non-NCAA tournament non-conference game we played was in 2020, so right now, that’s where our focus lies, getting ready to do as well as we can against a number of programs who, like us, are expected to be in the hunt for their conference titles,” Langel said.

In thinking about the loss of players such as Jordan Burns and David Maynard, Langel stated, “One of the great things about the NCAA and college basketball is that each year, every team is different from the last.”

With the team only adding one new face, Langel hopes that the continuity from last year helps the team grow in potential and play well. Additionally, Langel spoke to the work that returners have done on their individual games, excited to see how that work translates into the team environment.

Richardson and Records echoed Langel, speaking to how great the team is this year and the power that veterans will have in bringing winning experience into each new challenge this season.

The Maroon-News looks forward to seeing what this group brings to the court this season. Stop by Cotterell Court for their first game Tuesday, Nov. 9, against Northeastern.