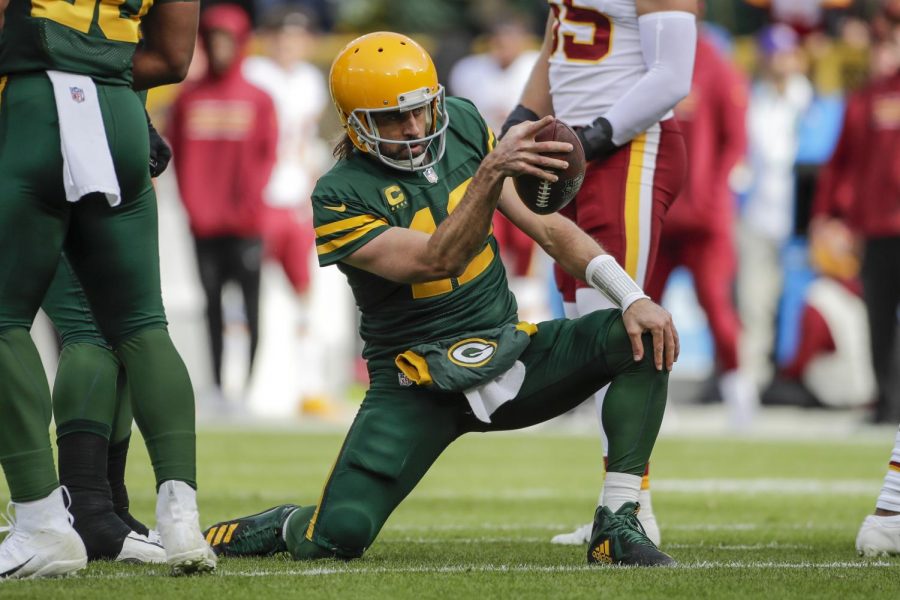 HEY RODGERS!: Aaron Rodgers and the Green Bay Packers ended the Cardinals undefeated season, and now they are in the conversation for best team in the NFL.

I mean, after last week’s pick, I think I have lost all of my credibility. Why did I ever have any faith in the Detroit Lions? Anyways, here we go again. For this week’s pick, I’m taking the Green Bay Packers to cover against a struggling Kansas City team that can’t seem to find their groove. Green Bay has reeled off seven straight victories, with the most important win coming last Thursday night against the formerly undefeated Arizona Cardinals. Without stars Davante Adams, David Bakhtiari, Jaire Alexander, Allen Lazard and Za’Darius Smith, the Packers took down one of the (if not the) best teams in football. They did it by running the football and playing outstanding defense. Running backs Aaron Jones and A.J. Dillon combined for 137 yards on the ground, and the defense and special teams managed to take the ball away from the Cards three times. If the Packers can continue to dominate with the run, the return of wide receivers Davante Adams and Allen Lazard will only bolster this Green Bay offense to victory against a Chiefs defense that has been terrible. Give me the Green and Gold.

In rather sneaky fashion, the Tennessee Titans are 6-2 after knocking off the Indianapolis Colts in overtime on Sunday. However, this important divisional win came at an almost insurmountable cost. Derrick Henry, who already has ten rushing touchdowns and is closing in on 1000 yards this season, suffered a foot injury during the game that will potentially sideline him for the remainder of the season. This is an absolutely devastating blow to a team that relies so heavily on King Henry, who in my mind is the only non-quarterback to have a legitimate case for league MVP over the past few seasons. Yes, he scores lots of touchdowns. Yes, he rushes for a ton of yards. But perhaps most importantly, he is an absolute workhorse who knows the Titans will have to revamp the playbook when someone who is the centerpiece of essentially their entire offense is out. Their first test without Henry comes against a dominant 7-1 Rams team. Mike Vrabel and the Titans will not be able to control the game on the ground like they are used to, and Sean Mcvay’s offense will put up too many points. Give me LA to pull away.

The now 7-1 Arizona Cardinals are still arguably the best team in the NFL. The Thursday Night Football loss to the Packers, a team without their best receivers, is a bit of a blow to the Cardinals’ confidence. But, at the end of the day, you lost to Aaron Rodgers, and there is not too much shame in that. Kylar Murray, a top-three MVP candidate, had an off game with two interceptions, and the whole offense did not have much going for them in this one, netting their second-lowest total for offensive yards on the season. I suspect the Cardinals will come out firing after this loss, showing the rest of the NFL why they still deserve to be the top dog.

They have extra time to think about the loss and rest up, and they have a favorable matchup in Week 9 against the San Francisco 49ers. The Cardinals have faced the 9ers already this year, beating them 17-10. Trey Lance started in that game, and it is likely that Jimmy Garoppolo will be starting for the 9ers this week. Either way, this team is the definition of mediocre. Their offense has been trending in the right direction as Garoppolo has been playing OK. Their run game has improved with Elijah Mitchell leading the backfield. Deebo Samuel has had back-to-back 100-yard performances. But with all that being said, I don’t see them upsetting the Cardinals, who will be firing on all cylinders to avenge their loss and avoid a losing streak. The 49ers are home in this one, but they haven’t won a game at Levi stadium this year, going 0-3 in the Bay Area thus far. The spread is much tighter than I anticipated, and I think the Cardinals should win by at least four.

The Jacksonville Jaguars, per usual, are a disgrace to football. Urban Meyer looks heartless on the sidelines as his team struggles to put together drives longer than three plays on offense. The defense looks lifeless because they never get a break. The entire experiment is falling apart at the seams faster than Colton Underwood’s NFL career. And, without running back James Robinson, all the weight for this game will be on rookie quarterback Trevor Lawrence’s shoulders.

The Buffalo Bills are consistently steamrolling the competition. MVP-favorite Josh Allen looks like a man on a mission. Even without his tight end Dawson Knox, Allen is finding new ways to win football games. Their secondary, led by cornerback Tre’Davious White, has been lockdown all season. The Jaguars lack an explosive talent at wide receiver and the Bills defense will have no trouble shutting any pass attempt down. This is a game the Bills can sleep through. Expect nothing less than utter domination as Bills Mafia stroll into Jacksonville and grind out a win.