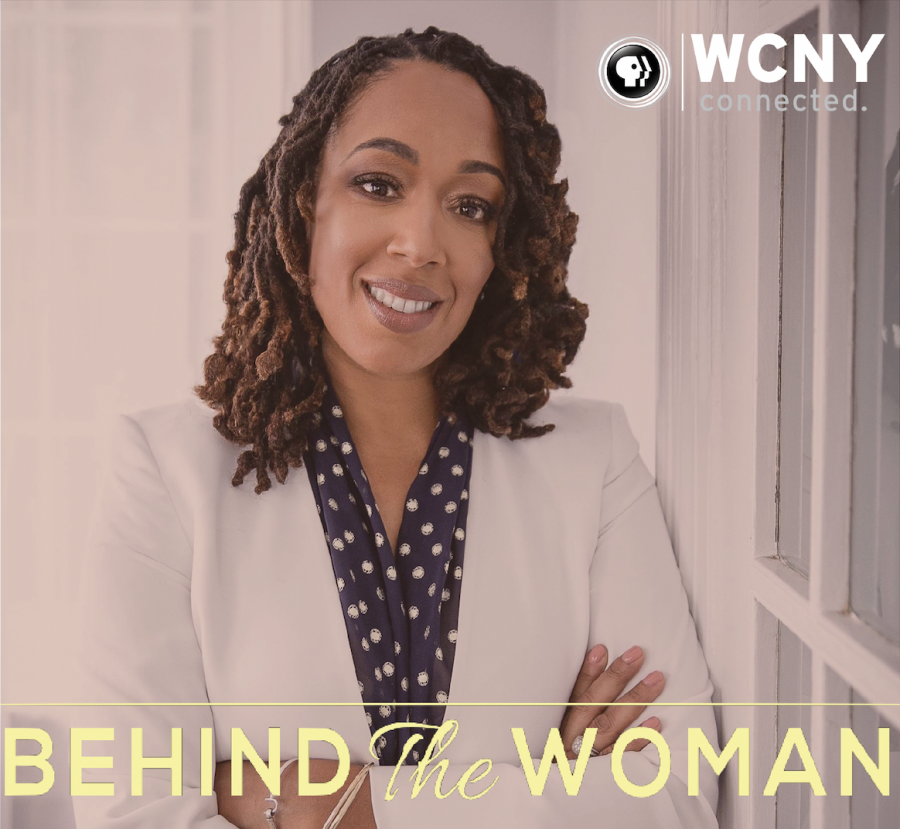 TO THE FOREFRONT: VP for Communications details her shift to the face of ‘Colgate Together’ in a new PBS WCNY special.

The Center for Women’s Studies (WMST) held a watch party on Thursday, Oct. 28, for Vice President for University Communications Laura Jack as she appeared on the PBS special: “Behind the Woman,” which aired on Tuesday, Oct. 26.

“Behind the Woman” is a special that shares stories from diverse and influential women leaders in order to inspire other women to pursue their goals. It is a local public television program presented by the Western and Central New York Television Station (WCNY-TV), according to the PBS website.

“I met the host of ‘Behind the Woman’ at an event in Syracuse a few years ago. Dr. Johanna Rogers reached out when she was planning the second season of ‘Behind the Woman’ and asked if I would be willing to be interviewed,” Jack said. “I am a very behind-the-scenes person so I was pretty nervous to be filmed, but enjoyed working with her and her team.”

In the 25-minute special, Jack began by discussing her experience growing up in Queens, NYC and attending Pace University for her undergraduate degree and Baruch College for her two master degrees, before eventually getting involved with corporate communications as an initial career path. Jack is now a doctoral student at Syracuse University.

“I spent probably ten years working in that corporate space,” Jack said in the PBS special. “I was working with librarians on college campuses on their subscriptions. And then I thought, maybe education is the direction I want to go.”

Jack then became a marketing coordinator for City University of New York (CUNY), which began her career in higher education. After working at Johns Hopkins University and Howard University, Jack started working at Colgate in 2017.

“Within a couple of days of being at Colgate, a young woman came up to me and said ‘I’m just so glad you’re here. There’s not a lot of people that look like us on this campus,’’’ Jack said in the televised special. “At the time, I was the first and only person of color in the President’s cabinet. While it was different, it felt like there was a purpose for me to be there. I think in the four years since I’ve been here, there have been moments where I’m like ‘Yep, this is why I’m here.’”

Rogers and Jack also discussed the processes of navigating and running a university during a pandemic. Most students know Jack through her weekly email, “The Colgate Together Digest,” which began during the COVID-19 pandemic as a way to support students.

“We were all learning about the pandemic in real time together, and there were so many questions and so many things unanswered,” Jack said. “There needs to be a voice, something that coalesces all of this together, so we created ‘Colgate Together.’ We talked about who it should be from and the direction we went was having me put my name on them, so it became the ‘Laura Jack email.’ For someone who doesn’t have a lot of direct student contact, it became this channel where I would talk with students about how they were doing on campus, what they needed and what we could do to help them during such a difficult time.”

“Within this year, around the pandemic, there was also another crisis we were facing. The country was reckoning with racism and brutality that still takes place in 2021. A lot of institutions were having conversations that were not happening before,” Jack said in the PBS special.

The Center for Women’s Studies put on the screening to showcase the work that Laura Jack has been doing on-campus and to talk with her directly. Jack ended the screening with a live Q&A where audience members were allowed to ask questions before wrapping up. According to WMST Alumni Relations Intern junior Rebecca Sam, the special allowed students to see more of what Jack does behind the scenes.

“There are a lot of people that do this work, but you often don’t remember their names, they don’t go down in Colgate’s history,” Sam said. “[Jack’s] existence here is recognized and it will go down in history. And there’s no way Colgate or anyone can stifle that because it is on such a national level. It is just going back to giving Black women and BIPOC women the recognition they deserve.”

Sam believes that having the PBS Special documented online will allow people to give Black women and BIPOC women the recognition and visibility they deserve. According to WMST Intern junior Graci Galvez, who is in charge of multicultural and LGBTQ+ initiatives, people will be able to stream the special online and other women can see that as a form of support and as validation of their experiences.

“I hadn’t even known what she looked like until today, and I think it is so important to put a face to the name,” Galvez said. “It really goes unnoticed how much work she does as a woman of color who holds such a high position and facilitates outreach to thousands of students. I can’t even begin to imagine how many people and how many things she is responsible for, and the emotional labor that comes with that.”

The “Behind the Woman” special is available to stream on the PBS platform at any time.

“I saw the final episode when it aired on Tuesday, [Oct. 26], and was very happy with it,” Jack said. “Dr. Rogers was a joy to work with and helped me to share my story. I hoped the episode would offer insight into my experience at Colgate and inspire others to find their voice, even during difficult times.”