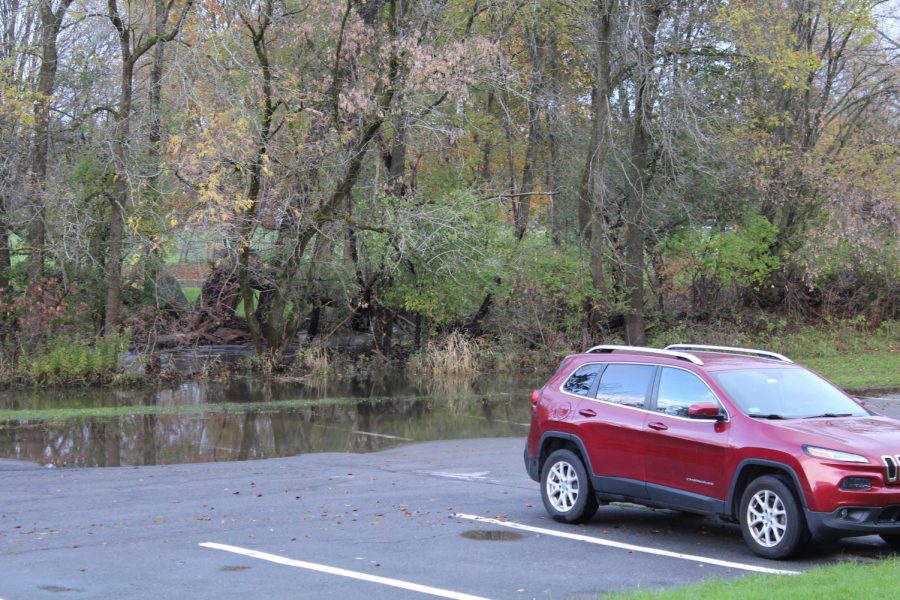 On Tuesday, Oct. 26, the Newell and Parker Apartments experienced significant flooding due to heavy rain and high winds in the Hamilton area, the weather caused by a Northeastern storm that moved through cities along the Atlantic coastline over the weekend of Oct. 23 and Oct. 24.

On the afternoon of Oct. 26, Area Director for Junior and Senior Living Jacob Dunwiddie emailed apartment residents on behalf of Campus Safety, warning them about the flooding of Payne Creek, located nearby the residential parking lots. In addition to informing residents that Payne Creek had overflowed, Campus Security opened the Andy Kerr Stadium parking lot to allow for temporary student parking overnight, according to the Oct. 26 email sent to student apartment residents.

Residents, including seniors Libby Lindstorm and Ellie Miller, reflected on Campus Safety’s quick thinking and accommodations following the flooding. After reading about the suggestion, Lindstrom moved her car to Andy Kerr Stadium, in accordance with the email from Dunwiddie. Although she was somewhat nervous about the excessive water, Lindstrom expressed her overall gratitude for the alternative.

“It was nice [that] the alternative parking [Campus Security] offered was so close to Parker,” Lindstrom said. “It was pretty crazy. The river kind of swallowed the [residential] parking lot.”

Like Lindstrom, Miller was shocked by the volume of water left in the wake of Payne Creek’s flooding.

“When I got the email telling me to move my car, I thought to myself ‘there’s no way it’s that high,’” Miller said. “When I got home, I went out to see how high it was [because I was] worried that my [low] car was going to be underwater. When I got there, the parking spots next to my car were as deep as my ankles and the front bumper of my car was touching the water. It was pretty freaky, but ultimately it was fine.”

Colgate currently has a system in place for flooding and other weather-related issues. Director of Environmental Health and Safety Mary Williams described the exact series of events that occur after a flooding report is received.

“Flood concerns are most commonly reported to the Facilities or Campus Safety departments, which then triggers water and flood response protocols. One of the first steps is a safety assessment to check for electrical hazards, for example,” Williams said.

Like many weather events, the rainstorm had been forecasted by the National Weather Service ahead of time. Aware of past incidents of Payne Creek overflowing, Facilities and Campus Safety oftentimes plan ahead if possible.

“When there is a known potential for flooding, such as last week when flood warnings were issued by the National Weather Service, then you’ll see proactive messaging about relocating vehicles from parking lots that are at risk,” Williams said.

According to Williams, flooding has been an issue for apartment residents in the past. As a Colgate alum, Williams recalled an incident when Newell and University Court apartments flooded over the summer, forcing students, staff and basketball camp students to evacuate the buildings. Similar, yet less severe, flooding also occurred in 2011 and 2013, according to Williams.

Despite the flood, Associate Vice President for Facilities and Capital Project Stephen Hughes was able to provide apartment residents some reassuring news.

“There is no risk of structural damage with the type of construction that the University Courts, Parker and Newell apartments are built,” Hughes said.