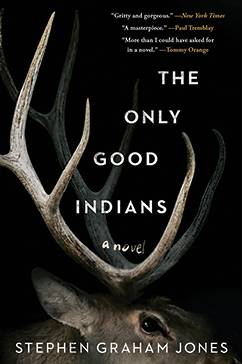 HORROR AND HUMOR: Stephen Graham Jones visited campus last week to speak to students and faculty about his latest novel. The writer captivated audiences with his brilliant writing and sharp wit.

Colgate hosted Stephen Graham Jones, author of the horror novel The Only Good Indians, as the latest installment in the Living Writers series on Oct. 28.

This spine-tingling novel follows four Native American men of the Blackfeet tribe in Montana after an elk hunt that violated the rules of nature. This elk hunt puts their culture’s foundational principles in the warpath of a vengeful supernatural spirit, forcing these men to grapple with their fears and transgressions.

The Only Good Indians is the latest addition to Jones’s extensive list of nearly 30 published novels, novellas and comic books. His work has been recognized by a fellowship from the National Endowment for the Arts as well as the Texas Institute of Letters Award for Fiction, the Los Angeles Times Ray Bradbury Prize, the Independent Publishers Award for Multicultural Fiction, a Bram Stoker Award and four “This Is Horror” Awards.

“For personal reasons, I have followed Mr. Jones’ career for a long time, and I was delighted in 2020 when The Only Good Indians came out, and it felt as if he was getting the recognition and respect he deserved for a very long time,” Associate Professor of English Jennifer Brice said of Jones in her introduction to his reading.

This novel is interwoven with Jones’ off-the-cuff humor that helps balance the ebb and flow of suspense and gore. The sections of his book seek to fulfill three major categories of horror: slashers, monsters and haunted houses. He writes of bloody and chillingly vivid murders, an eerie and vengeful animal spirit and a redemption arc to finally end the cycle of violence and vengeance that began for the childhood friends ten long years ago.

Although The Only Good Indians largely draws on Native American life on reservations, this book stands on its own as a model of horror writing rather than merely a window into Native life. Jones’ vast experience and success with horror writing is exemplified in this novel. The Only Good Indians will leave you disturbed, reconsidering how you walk through the world and wondering if some karmic justice is lurking just out of arm’s reach.

After participating in a Q&A with Brice’s Living Writer’s class, Jones did a public reading and answered visitors’ questions in Love Auditorium in Olin Hall. Instead of reading from The Only Good Indians, Jones chose to treat listeners to a short story entitled Attack of the 50 Foot Indian.

“I’ve got some stories I can read to you all that feel like sure things — one of them is a zombie story, one of them is a cannibalism story — I’ve always got those and they’re fun for me anyways, but I think I might try to read something that has a chance of failing, that feels like a gamble,” Jones said at the reading.

The story enraptured the audience, who listened with bated breath as his words painted a picture of a 50-foot-tall Native American man and a city’s attempt to contain him. This novel integrates darkness, humor and the supernatural to create an intoxicating story that forced readers to reconsider their relationships with their environment and fellow man.

While answering visitors’ questions, Jones’ sense of humor shone through. He cracked jokes with the crowd, setting off peals of good-hearted laughter when he asked with complete seriousness who Harry Styles is. He even displayed even more of his impressive writing range and read a short comedy story he wrote about a son’s relationship with his father as told from his hilariously grotesque memory of his father’s nipple getting accidentally cut off.

“The Only Good Indians was so graphic and gruesome and filled with themes of the supernatural and nature’s vengeance, so it was a pleasant surprise to see how cheerful and funny he was off the page and get to hear this funny little story,” senior Alyson Brusie, a student in the Living Writers course, said.

Visitors were able to understand the mind behind the masterpiece of The Only Good Indians as Jones answered questions and read some of his other work. Jones described the intuitive nature of his writing process, telling the audience that he wrote The Only Good Indians in only five weeks and wrote The 50 Foot Indian while killing time at a laundromat. Jones’ visit left listeners smiling from his jovial demeanor and quick wit, while also reflective of how nature, redemption, justice and revenge were communicated through the vehicle of horror in this mind-twisting novel.