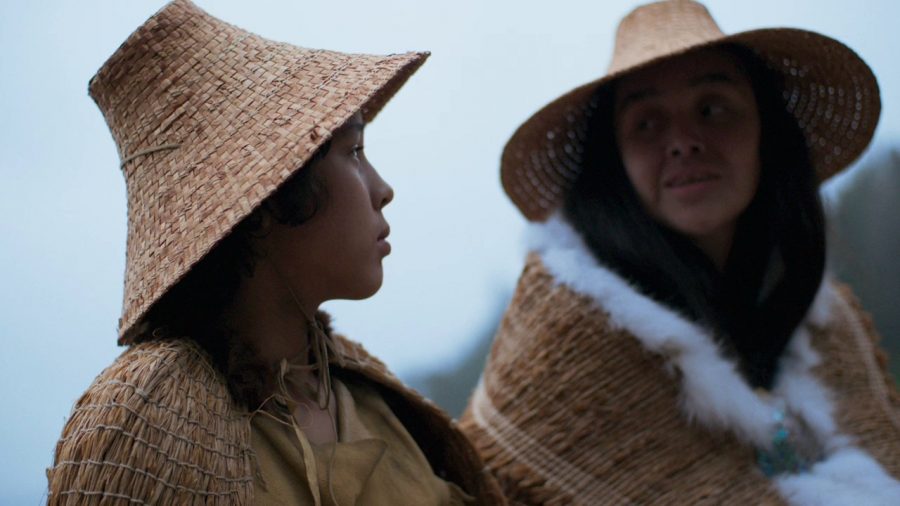 EDGE OF THE KNIFE: The Alternative Cinema film follows a Native American folk story in an attempt to revitalize Haida language and culture in the 21st century.

This week’s Alternative Cinema film screening “SGaawaay K’uuna (Edge of the Knife)” is a 19th-century drama based on a Native American folk story about a conflict between two families. The directors Helen Haig-Brown and Gwaai Edenshaw were gracious enough to hold a Q&A afterward. The film’s primary theme and objective were to encourage revitalization efforts of the Haida language, and in doing so, it also explores themes of nonconformity, spiritual knowledge and kinship within the Haida community. “SGaawaay K’uuna” is the first film to be told in the Haida language and have an all-Haida cast.  Among the current population of Haida people, little more than 20 (less than one percent of the Haida community) are fluent in the language, and many of them are in their 70s. “SGaawaay K’uuna” was filmed in the Haida Gwaii Archipelago, the native land of the Haida people, by an indigenous cast and crew. The story was produced in collaboration with the Haida community.

Edenshaw said during Q&A, “We (made) this movie for Haida speakers … It would be bad to tell Haida people about Haida people.”

The directors made sure to explain that their films were made, in part, by the actual Haida community in order to avoid misappropriating Haida culture.

The film opens with a foreshadowing – a Haida mask burning in a fire. In a voiceover, the narrator says, “They say a fire calls you into the forest. The cold will make you desperate for fire. But no matter how long you run … You cannot catch the fire. You run and run until your mind is sick and the spirits take you over. You become wild. You become Gaagiixid.”

The point of tension starts out as the relationship between Adiits’ii and Gass (his best friend Kwa’s son). In the beginning, Adiits’ii is portrayed as a beloved but heretic family member in the Haida community because he disregards certain customs and skills essential to their way of life. His disregard of respect for elders and Haida culture leads him to make a horrible mistake.

Adiits’ii is driven to hide in the forest, visceral and seething after absorbing the traumatic experience he caused. In succession, he sees a flame, he catches the flame, but another appears. He runs until he sees fire no more. Adiits’ii, sick and vulnerable, becomes a host for spirits and turns into a “Gaagiixid.” Gaagiixid, translated to “wild man,” is portrayed as feral, mute, but, most of all, repenting. A striking aspect of the film is the grueling and blunt scenes that depict Adiits’ii’s repentance; Adiits’ii continually inflicts harm upon himself until his face resembles the jagged mask burnt at the beginning of the film.

The Haida community struggles to unify in the face of supernatural adversity, and how to tackle hatred between the two former friends.

Many serious scenes portray the misery of Adiits’ii, but the film also depicts Haida people’s life. They use Haida dance and storytelling culture to foreshadow what would happen to Adiits’ii. One such scene was when Adiits’ii’s sister wished everyone would be able to find their voice, which directly referenced Adiits’ii’s inability to speak but also connects back to the revitalization of the Haida language.

First-year student Cooper Lowell found it unique how the film came from a first-hand perspective.

“I felt like the storytelling of it was really good. The film really brought the audience in,” Lowell said. “The fact that this movie was made by Haida people for Haida is important. Within Native American history so many stories are written down and told from the European’s and settlers’ perspective.”

Likewise, first-year Stella Damrauer appreciated that organizers chose a film to spread awareness of the culture.

“’The Edge of the Knife’ was a beautiful film. I thought it was very interesting to learn about the Haida culture through the film because I was able to see the language being used firsthand and also understand the culture, their values, their beliefs and more. Because Haida is an endangered and quite unknown language and culture, I thought it was incredibly smart to use this film as a way to bring awareness to it”

For a small, grass-roots film funded by a small grant from the Canada Media Fund, “SGaawaay K’uuna” was very well-received. It won “Best Canadian Film” and “Most Popular Canadian Film” from the 2018 Vancouver International Film Festival and the “Jury Prize” from the 2018 ImagineNATIVE Film Festival. “SGaawaay K’uuna” underscores the message of cultural revival through a clear-cut folk story that emphasizes the sense of interconnectedness within the small Haida community.