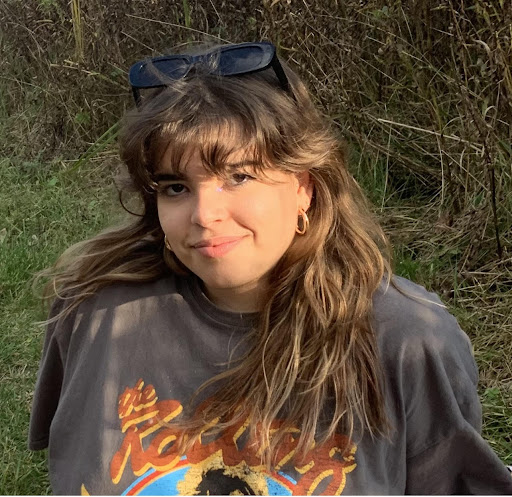 Printed with permission of Valeria Carrión

Before college, senior Valeria Carrión was never planning to concentrate in art. Today, she is painting her senior thesis and working on applications to attend graduate school for art.

Carrión, a double concentrator in art and psychology, was born and raised in San Juan, Puerto Rico. However, her high school years were spent at boarding school in Alexandria, Va. Despite her natural draw to art and access to an immaculate art program in high school, Carrión struggled to find the time in her schedule to take art classes and nonetheless finish the assigned projects when she did get the chance to take a class. When Carrión arrived to the Colgate campus as a first-year, she had no intention of concentrating or even minoring in art.

“I didn’t start out [concentrating] in art. In fact, I was never going to,” Carrión said. “It just so happened that as I started taking classes, I realized that it wasn’t too late to pursue an art minor.”

Carrión decided on a psychology concentration along with an art minor, but it began to dawn on her that she was not entirely fulfilled by her studies. Come spring of her sophomore year after the COVID-19 pandemic hit, Carrión made a leap and bumped her art minor up to a concentration.

“As I continued with psychology, even though I really liked it, I decided that it wasn’t something that really fueled me. … it didn’t make me want to get out of bed every morning … it was a dread and a resentment that was building up in the field of psychology because I wasn’t able to express myself to the degree that I wanted to … and art allowed me to do that,” Carrión said. “I don’t regret my psychology [concentration] at all. In fact, I think it’s what pushed me to pursue [art as well]. Had I never done that, I don’t think I would have pursued it.”

Carrión’s current main medium is oil painting, but she also has a love for watercolor and makeup.

“I love [oil], but watercolor has a very special place in my heart […] being stripped from that very in-person experience [because of COVID-19] resulted in having to shift all of the materials around because it’s not accessible to bring a whole easel into your house. We started doing watercolor and it’s just so fun to experiment with … I have a really insane appreciation for people that can dominate watercolor and shading,” Carrión said.

During this same time in spring of 2020 amidst the pandemic lockdown, a friend reached out to Carrión to partake in an ALANA make-up tutorial event over Zoom. Carrión, alongside two other artists, did her own tutorial segment as part of the event.

“That experience was literally the most nerve-wracking experience I’ve done in such a long time. … but, overall, the feedback that I got afterwards from some of my friends was so assuring that it made the whole thing worth it,” Carrión said.

To Carrión, make-up is more than just a part of a daily routine or something utilized to improve appearance.

“You’re literally becoming a part of your art […] I think it’s a lot more personal in some ways because you’re being vulnerable by putting your face out there. Regardless of the look you might be showing, regardless of what you’re trying to draw attention to, it’s just a vulnerable position to be in,” Carrión said. “I think that’s also important to recognize in art because a lot of times roadblocks come from artists not wanting to be vulnerable and in touch with their work. Makeup for me allowed me to do that because I was literally staring at myself in the mirror for two hours at a time […] it’s personal, it’s very fun, but for me it was also a growing experience.”

Currently, Carrión is working on her senior thesis piece — a painting that is a blown up image of her face, involves three different canvases and intends to touch on issues surrounding invisible illnesses.

“I’m kind of touching on the physicalities of invisible illness. So … raising awareness about how these invisible illnesses can manifest themselves if they were to be physical. It’s kind of playing around with how this particular diagnosis makes me feel, and how I can portray that to the viewer … so they can get a sense of understanding of what I go through, what other people go through … to raise awareness and more understanding about just the fact that people deal with stuff everyday that you may not know about,” Carrión said.

Carrión expressed that this painting, and art in general, may appear individualistic, but it is truly her fellow artists that have made the piece what it is today as well as the artist that she is today.

“The fact that I have been able to be in an environment — like the studio that I am provided with, the people that I do art with — they have allowed me to literally build up my art and become a more confident painter, and I’m so, so grateful [for] that,” Carrión said. “I just think that art, even as individualistic as it may seem, it’s so much more of a collaboration than you can ever imagine. There are so many working elements that go through it to actually make a painting become what it is.”

A prime example of this, she explained, is when she thought her thesis painting was finished two weeks ago, but she received a critique from a fellow artist and has not been able to walk away from it since.

“The people really make the art is what I’m saying,” Carrión said.