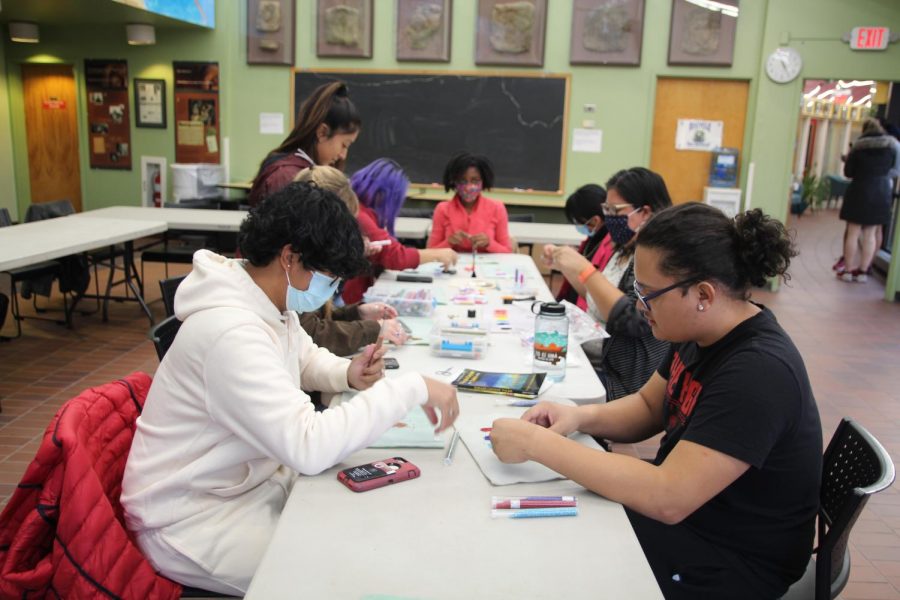 During Native American Heritage month, the Africana, Latin, Asian and Native American (ALANA) Cultural Center plans to host a number of events in celebration of Native American culture, all aimed to educate Colgate students on Native American history and the importance of acknowledging a colonial past. The center kicked off its first event, “Storytelling and Indigenous Arts and Crafts,” on Friday, Nov. 5.

Other events include an event on Thursday, Nov. 11, which enables interested students and staff to visit the Oneida Nation (Shakowi) Cultural Center, “Stories From the Earth: Recovering Ancient Maya Images of Cosmology and Identity” with Assistant Professor of Anthropology Santiago Juarez on Tuesday, Nov. 9 and “Cooking Around the World Featuring Navajo Dishes” with Administrative Assistant for Peace and Conflict Studies, Native American Studies and Africana and Latin American Studies Nicole Carvell on Friday, Nov. 12.

“Part of it is going to be some storytelling from my own culture. I’m Navajo. I’m originally from Arizona, so because of that I can help put on some of the programming here,” Carvell said.

At the beginning of the event, students were offered dinner and were later able to bead earrings under the instruction of Carvell.

First-year students Justin Bugarin and Fredy Alvarado-Retana attended the event after hearing about it through friends, and they shared their opinions on why it’s important to celebrate Native American Heritage Month at Colgate.

“It’s important because [Native Americans] went through a lot of suffering already. One of the things they suffered was colonization and how their heritage was taken away too. I feel like Native Americans are pushed away and isolated,” Bugarin said.

“I think just learning the mistakes of our past will help us to progress forward with a different mindset so that we can avoid making those same mistakes. Acknowledging this month and the people who have suffered through the past really just — it’s not exactly reparations, but it’s a way of saying that we acknowledge what happened and we are not trying to push it away. As we move forward, we will try to be different in our mindset and in our ideals,” Alvarado-Retana said.

Carvell also had stories and books to share at the event.

She explained that some of the traditional stories she grew up with can only be told at winter time. Since it is November, it is in the time frame that Carvell can share these. As Carvell described the importance of storytelling, she shared some of the difficulties she has faced growing up with English as her first language.

“I don’t speak Navajo myself. I know some words and phrases. My parents wanted me to have better advantages, so they said you should speak English if you’re going to go to school and get an education,” Carvell said. “I have seen students, when I was growing up, who struggled with education because Navajo was their first language and it was really difficult for them. I understood why my parents did that, but also looking back I am really kind of sad that I didn’t learn my language.”

This week, Carvell will host “Cooking Around the World Featuring Navajo Dishes.”

“I made some Navajo dishes. While we were doing it, I was able to explain that these are some of our traditional foods, but they were traditional since post-contact. I talked a little about some of the pre-contact foods that we have made and still use,” Carvell said.

Carvell shared why she believes it is important to celebrate Native American Heritage Month on campus, especially in response to stereotypes harming Native communities.

“I think it’s especially important here because of where we are situated. We’re on traditional Haudenosaunee lands and you have to be able to acknowledge the history, the actual history of this country and the colonialism to understand how we got here. We persevered. We’re still here,” Carvell said. “It’s just bringing more awareness. Once people can stop seeing Natives as some sort of stereotype or mascot or anything and see that we’re actually real and that we’re here, it will help us as we try to combat all these issues.”

According to Director of the ALANA Cultural Center Esther Rosbrook, ALANA is an important resource on campus because it creates a safe space for many students, as well as raises awareness and recognition of differing multicultural identities, including Indigenous identities.

“[The] ALANA Cultural Center recognizes, with respect, the history of Indigenous people of Onyota’a:ká or the People of the Upright Stone of Oneida Nation, whose ancestral lands Colgate University now stands. The Center recognizes our collective responsibility to acknowledge past colonial histories and is committed to social justice,” Rosbrook said. “Therefore, we recognize the history that the Indigenous people have experienced as well as its implication to the Center’s work related to social justice awareness and education.”

Students can register for upcoming events on ALANA’s page on the Colgate website.