Op-Ed: Secrets Behind the Sculptures Around Campus 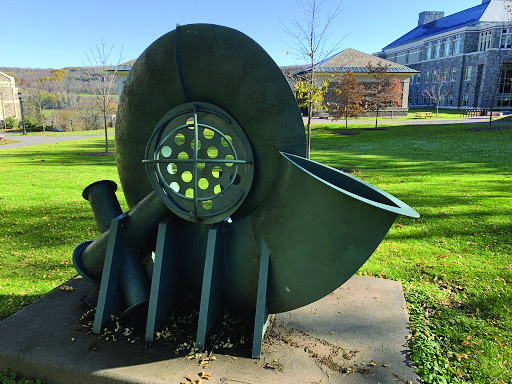 Printed with permission of Kristen Quinonez

Have you ever been on your usual trek to class, passing by the same buildings, abstract sculptures and people that you usually do? On my way to classes, I feel an instant warm sense of comfort as I pass the O’Connor Campus Center [COOP], or when I see friends and fellow peers also on their way to a morning class, but I had absolutely no idea what that sculpture between Olin Hall and the Ho Science Building was. Before writing this piece, I was also completely perplexed by the giant horn sculpture that adorns the center of the academic quad. These are only two of the many sculptures that are scattered around campus, arranged in interestingly complex configurations and strategically placed in front of academic buildings to serve as a concrete welcome mat to all who enter.

But every time I enter Ho, I witness a creative work that was laboriously crafted by Peter L. and Maria T. Kellner Endowed Chair in the Arts, Creativity and Innovation Dewitt Godfrey, one of Colgate’s own professors. This sculpture is named “Odin” and stands between Olin Hall and the Ho Science Center. At first sight, Odin appears to be a geometric rendition of a sphere or three dimensional circle, with metal circles stacked on top of one another. Given the particular arrangement and nature of the sculpture, I was curious about the history behind its introduction to campus. Godfrey provided some details about the sculpture’s origin on campus, which was in 2015, and discussed some of its compositional elements, and his own inspiration and intent with creating this work.

“Odin is the culmination of a Picker Interdisciplinary Science Institute research grant (2012) with myself, [Colgate professor emeritus] Thomas Tucker, Tomaz Pisanski [at the] University of Ljubljana and Daniel Bosia, [who worked at] at Arup. My work is inspired by natural geometries, and Odin is the first project where we employed digital design and fabrication tools.”

I find it fitting that Odin marks the space in front of the science building on campus, as it embodies the way that science, math and art can converge to create a masterful piece of art. Godfrey continued to explain the purpose of installing this sculpture and its significance.

“It is the largest public art project on campus and I hope it demonstrates how the campus can be used to support cutting edge art and design. The sculpture is made up of approximately 225 conical elements that describe a kind of pinched ovoid,” Godfrey said.

Odin’s impressive status as the largest public artwork on campus demonstrates a commitment to fostering artistic expression and scientific and mathematical inquiry. Godfrey further explained the strategic placement of Odin in front of Ho.

“The courtyard between Ho and Olin has both public yet limited access, allowing us to experiment at large scale safely and without fear of vandalism. The location of Odin makes it kind of a surprise, hidden below ground and views from labs, corridors and offices.”

Odin isn’t the only sculpture that I commonly passed but never really knew. The horn sculpture on the academic quad is located in a highly visible location, making it a subject of admiration on my daily walks to class. This sculpture is green with a horned cornucopia appearance and lies in front of McGregory Hall. Upon closer inspection, I noticed tube or pipe-like pieces around the central horn and a center populated with many small holes, prompting my curiosity about the abstract nature of this sculpture. Luckily, Godfrey offered his expertise about this sculpture as well and described its complicated history on campus, starting in the 1990s when it was first installed.

“The title is Neptune’s horn, it has nautical references and relates to the Artist Jonathan Kirk growing up on the Cornwall coast [in the UK]. It was the first of what was to be a series of commissions that met with a lot of resistance; people often don’t like change, coupled with the sentiment that the campus is beautiful as is.”

This sculpture’s presence on campus brings up an interesting point about aesthetic and artistic change and how art can be at the forefront of societal change as a whole. So next time you begin your usual trek to class, look out for the sculptures around campus that are far more indicative of the campus’s culture and history than one might expect.